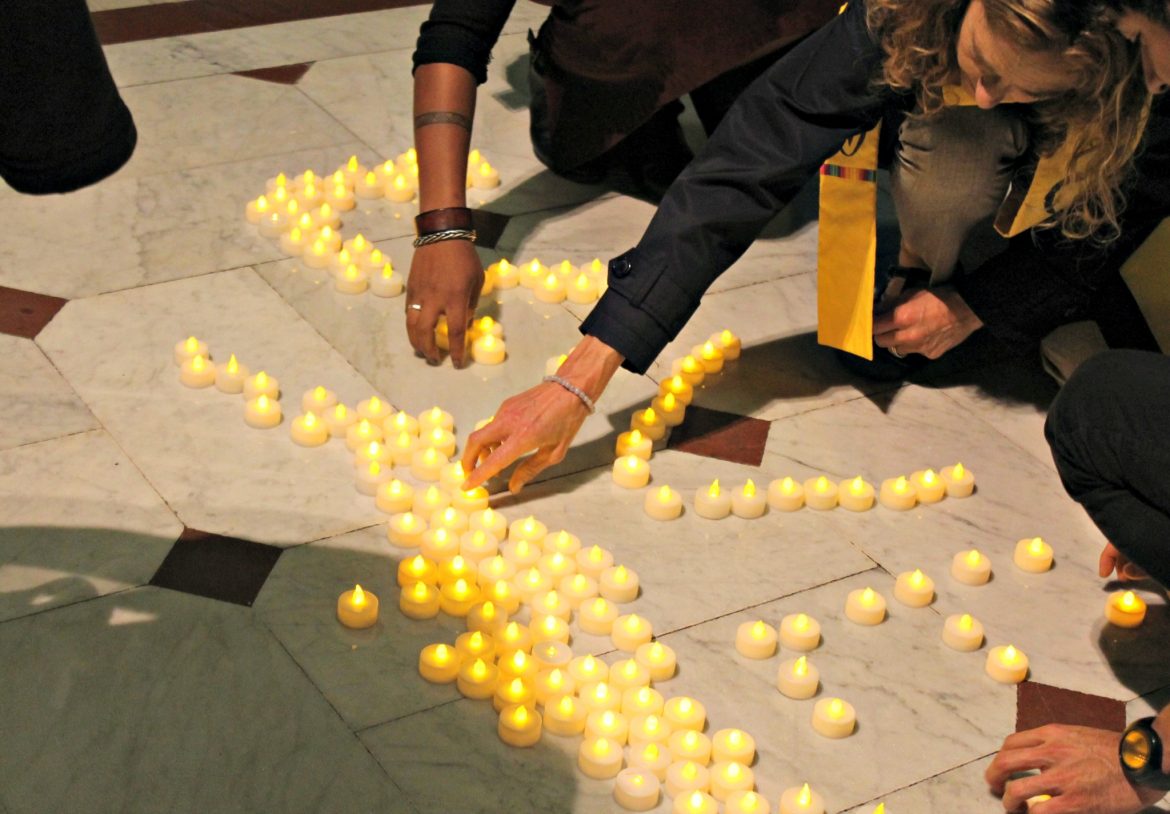 SPEAKING OUT ON DACA: Activists arranged battery-powered candles to spell out "Love" during a pro-DACA event outside the House Chamber on Wednesday.

BOSTON — With his purple tie knotted tightly, Gov. Charlie Baker flew to Washington, D.C., last week hoping to bring his brand of bipartisanship to the polarized capital. Few might have predicted, however, that the colors in Washington were already starting to bleed.

Ostensibly, the state Legislature and Congress both returned to work from a summer recess, but it was the gridlocked Congress — with an assist from President Donald Trump — that would make the breakthrough.

As state legislators eased into their post-Labor Day schedule (and that’s being generous), Trump struck a debt-ceiling deal with Democratic leaders Nancy Pelosi and Chuck Schumer to fund the government for three months and deliver billions in relief funding for Hurricanes Harvey and Irma.

Trump’s shunning of Republican Congressional leaders to make a deal with the Democrats rattled Washington and seemed to put wind in the sails of the White House as it prepared to deal with Irma, another catastrophic hurricane poised to strike South Florida on Sunday.

The debt ceiling deal also distracted, if only for a fleeting moment, from the storm the president stirred up with his decision to phase out the immigration program known as Deferred Action for Childhood Arrivals, or DACA.

The program, created by former President Barack Obama through executive order, allowed the so-called Dreamers, who were brought to the country illegally by their parents when they were minors, to apply for protected status that would allow them to go to school and work without fear of deportation.

Trump, through his Attorney General Jeff Sessions, challenged Congress over the next six months to enshrine DACA into law if its members want it preserved, while Democrats and many Republicans, including Gov. Baker, derided the move as a cold-hearted play for the conservative base that would send immigrants in the United States, through no fault of their own, back into hiding.

Massachusetts Attorney General Maura Healey joined yet another multi-state lawsuit against the Trump administration to block the decision to end DACA, while advocacy groups rallied at the State House and around Boston seeking leadership from the state to protect the futures of the Dreamers.

It was in this atmosphere that Baker joined his fellow governors from Tennessee, Montana, Colorado and Utah in testifying before the Senate Health Committee [see video below] on steps Congress could take to stabilize Obamacare health insurance markets in the wake of failed efforts to repeal the law.

Baker and the bipartisan cohort of governors told the Senate panel, headed by Tennessee’s Lamar Alexander, that the single biggest thing they could do would be to ensure at least two years of funding for cost-sharing-reduction payments.

The CSR payments, used to keep patients’ out-of-pocket expenses down, were a part of the Affordable Care Act, but have been challenged in court by Republicans and dangled by Trump as a lever he could pull to force the collapse of Obamacare.

“I think it would be a bad idea,” Baker told U.S. Sen. Elizabeth Warren about Trump’s threat, responding to a softball lobbed across the plate by Massachusetts’ senior senator in what sounded like a coordinated back-and-forth designed to bloody the president.

Baker sat in the middle of the five governors as the de facto leader of the pack. He was given ample time to wonk out on healthcare policy, and just enough time to score some political points back home.

Steve Hoffman, the new chairman of the Cannabis Control Commission, met the press last week for the first time.

Hoffman, at least according to himself, may have been one of those mythical Mass. voters who actually read the details of the pot-legalization question and voted against it, but not for reasons you might think. No, Hoffman said he supported the goal of the petitioners, but opposed the ballot question because he felt the implementation timeline was unrealistic. 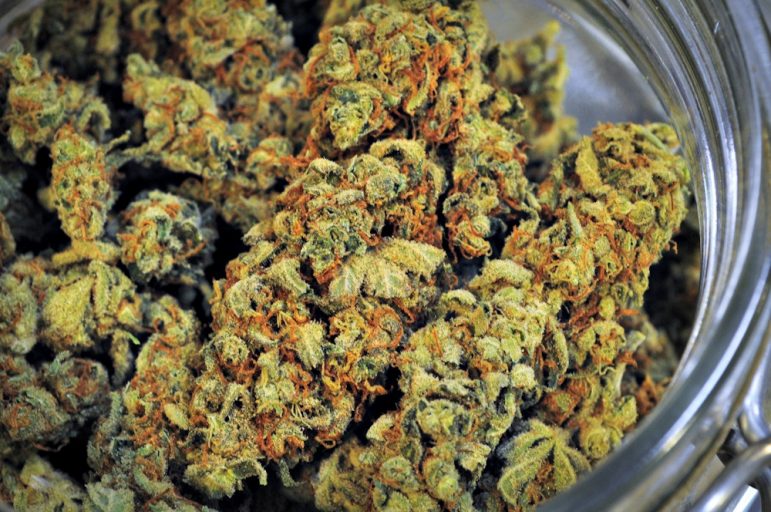 Ironically, Hoffman, who revealed that he last smoked pot with his wife last year in Colorado under a fireworks-lit sky on the Fourth of July, has inherited a schedule to license retail pot shops that some worry might be too aggressive.

Dreamers trusted their government. And Trump failed them. That’s why I’ve filed S.668 to protect in-state tuition for #DACA students in #MA pic.twitter.com/vrMEfu3NBJ

Dan Grabauskas, the well-connected political operative who was forced out as MBTA general manager by the Patrick administration, has been hired back by the state transit agency.

In August 2009, then-Transportation Secretary James Aloisi announced the Worcester-born Grabauskas, appointed to lead the debt-laden agency in 2004 by then-Gov. Mitt Romney, would leave his post and be paid $327,486.81 in salary and unused sick and vacation time.

As Labor Day weekend neared, word spread that the firm Grabauskas Consulting Inc. had been hired to a $30,000-per-month contract, signed Aug. 23, to manage and supervise the commuter rail system, which is already contracted out and operated at a significant sum by vendor Keolis Commuter Services.

The MBTA recently hired Luis Ramirez, a business consultant, to take over as general manager of the T on Sept. 12. During Grabauskas’ tenure as GM, the MBTA phased out tokens, deployed WiFi on the commuter rail, introduced “next train” announcements in the subway, banned cell phone possession by operators on duty, deployed bomb-resistant trash barrels, and completed the Greenbush commuter rail line, according to a fact sheet distributed by the T in response to a query about hiring Grabauskas.

“To strengthen our team, we are bringing in, on an initial one-year basis, as an independent contractor, someone to have the responsibilities of an ‘executive director’ of commuter rail,” MBTA Deputy General Manager Jeff Gonneville wrote to employees in announcing the hiring.

“Under my supervision, Dan will focus on assisting the Railroad Operations team to, among other things: identify significant contractual gaps between the terms of the Keolis contract and adherence to those obligations; develop in-depth strategies to improve the system’s performance and internal oversight; take the lead on outside communications with customers, legislators and other stakeholders; focus on key projects, including [positive train control] installation, [automated fare collection] 2.0 and potentially disruptive capital work; and help identify Operating Budget cost savings and work closely on such topics as the Commuter Rail Vision Study, and the analysis of fleet-procurement alternatives.”

Grabauskas, 54, has held several state government and legislative positions, including Registrar of Motor Vehicles from 1999 to 2002, and Transportation Secretary from 2003 to 2005. He graduated from St. John’s High School and the College of the Holy Cross.

House leaders are weighing the prospects of packing vetoed spending back into the state budget when they return to Beacon Hill this week, but the ongoing slump in state tax collections that resumed in August is not making for easy decisions.

House Ways and Means Chairman Jeffrey Sánchez, D-Jamaica Plain, told State House News Service late last week that he and his office are still reviewing revenue reports for July and August, but he expects the House to take up at least some budget veto overrides when it returns to formal sessions on Wednesday. 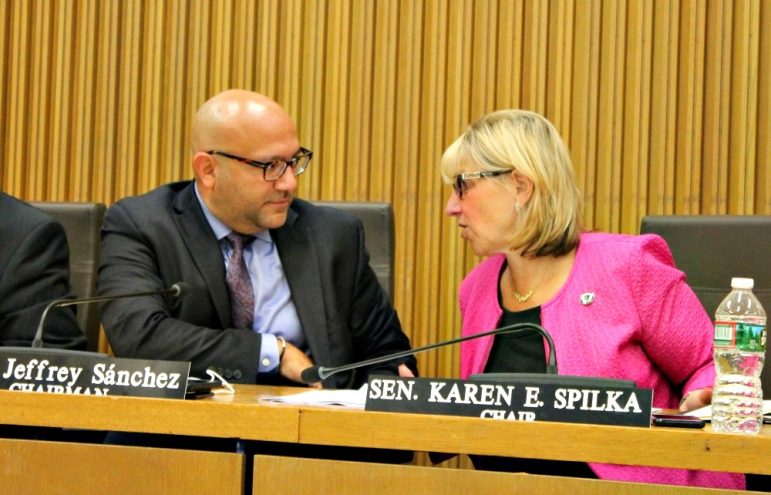 Ways and Means Chairman Jeffrey Sánchez, left, said he expects the House to take up some budget veto overrides Wednesday.

“We’re working with the conference report and reviewing the things we could be taking up, but we are going to take some things up,” Sánchez said.

Gov. Baker signed a $39.4 billion fiscal 2018 budget in July and vetoed nine of the budget’s outside sections and $320.3 million across 169 line items, including $202 million related to the MassHealth changes he proposed in June. The net impact of the vetoes, after accounting for federal revenues, is $193 million, according to a Massachusetts Taxpayers Foundation analysis.

Before breaking for the August recess, legislators said they planned to monitor summer tax collections before deciding whether to override any of Baker’s $320 million in budget vetoes. Formal sessions are expected to occur over the next 10 weeks.

The revenue reports have not revealed a glut of unexpected revenue to support spending that would be added back into the budget through overrides. The state Department of Revenue on Wednesday reported collecting $1.712 billion in taxes in August, which was $16 million, or 0.9 percent, below the monthly benchmark. Two months into fiscal year 2018, tax collections are up 1.9 percent, but $11 million below the year-to-date benchmark, the department said.

DOR cautioned that July and August, the first two months of the fiscal year, are not significant months for collections and that “it is not advisable at this time to use year-to-date collections to formulate trends or patterns for the full fiscal year.”

Sánchez said his priorities when it comes to determining which of the governor’s vetoes the House might override include having “an understanding of the actual numbers of where we’re at with revenue,” and understanding how representatives feel about the budget as signed by the governor. Then, he said, Ways and Means will “take them all under consideration and we’ll see which ones end up making it through.”

If the Legislature is to override the governor’s vetoes, the process must begin in the House and must be completed during this calendar year. Overrides require a two-thirds vote in each branch. The Legislature cannot hold formal sessions this year later than Nov. 15, per its own rules.

The Democrat-controlled Legislature typically restores the vast amount of vetoed spending each year, although veto overrides in July 2016 contributed to a rocky budget year that was marked by repeated rounds of mid-year adjustments, and that ended with a revenue gap of $431 million.