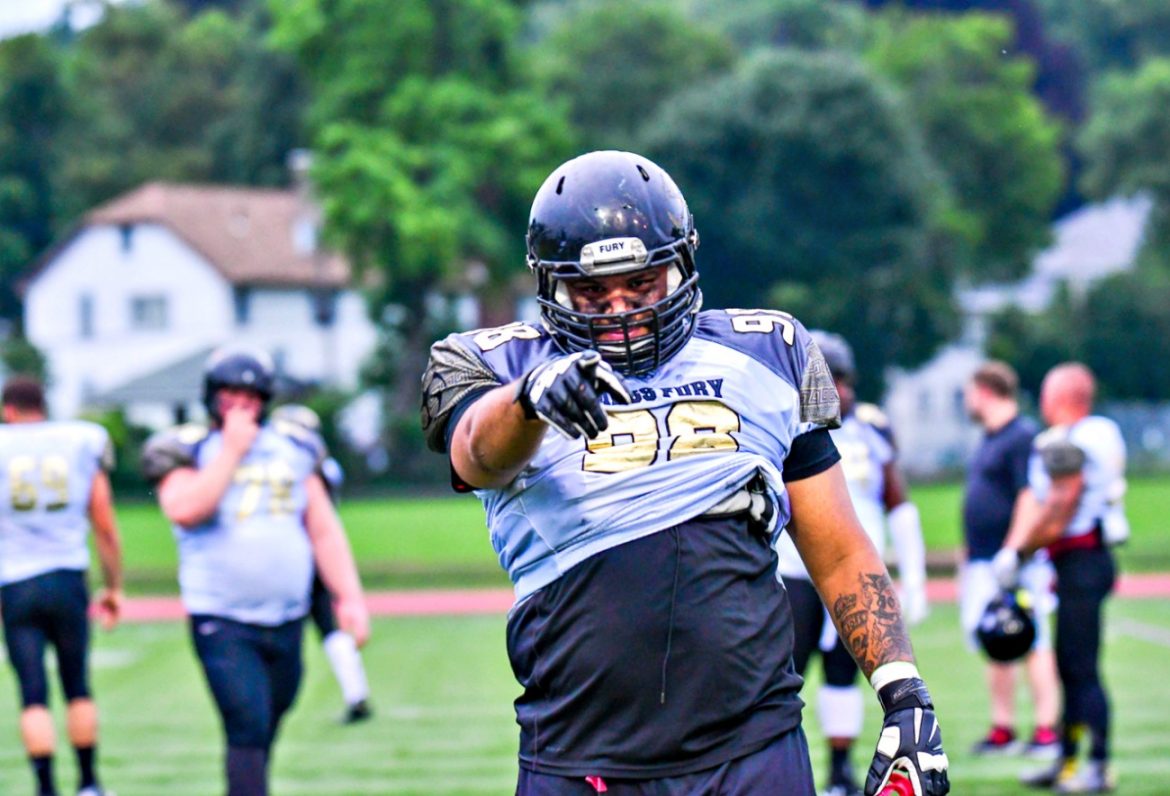 The Mass Fury wants YOU! -- to come to their next home game, Saturday at Worcester State.

The overwhelming majority of athletes stop playing their favorite sports at the youth, high school or college level. Without a ticket, the bright lights of Gillette Stadium or Fenway Park are out of reach.

There are options, though, for the weekend warriors who just can’t bring themselves to hang up the cleats or tag their dusty old shoulder pads for the next yard sale. And who don’t mind slightly dimmer lighting.

The semi-professional Eastern Football League has provided a competitive oasis for scholastic and collegiate gridiron greats since 1961 — many area fans may remember the long-dominant Marlborough Shamrocks — and for the past several years the Worcester-based Mass Fury have been winning trophies and keeping dreams alive.

The team is coached by Rick Clemons, who was the Fury’s offensive coordinator last season when the squad advanced to the EFL semifinals. Clemons now oversees a team that routinely features some of the best non-collegiate amateur football talent in Worcester County.

The Fury were 7-5 last season and are 56-16 over the past five seasons, which include 2014 EFL and United States Football Association East Coast championships and a 2015 National Football Events national championship. Last season ended at the hands of Taunton, which beat the Fury in the playoffs for the second straight year.

“It means a lot,” Clemons said of being able to coach the Fury. “We’ve got an offensive coordinator whose [high school] team just broke the state record for points scored, so the offense pretty much runs itself. We brought back a good defensive coordinator, too, so they pretty much run the whole thing and I get to deal with the off-field stuff for the most part.”

More football coverage from the Sun:

The new Fury offensive coordinator is Harrison Ingels, who holds the same post for Quabbin Regional High, where last year his Panthers put up a Central Mass.-record 476 points (43.2 points per game) in running up a 7-4 record.

Clemons said prior success — six straight winning seasons — makes his job much easier, though not easy, when trying to build a team.

“Knowing we’ve been to the playoffs a few years in a row and won a championship before is huge for us,” he said. “A lot of the guys we have do a lot of the recruiting themselves with their buddies. We got fortunate with a lot of the Fitchburg State kids. They brought a few more guys in [the last two years].” 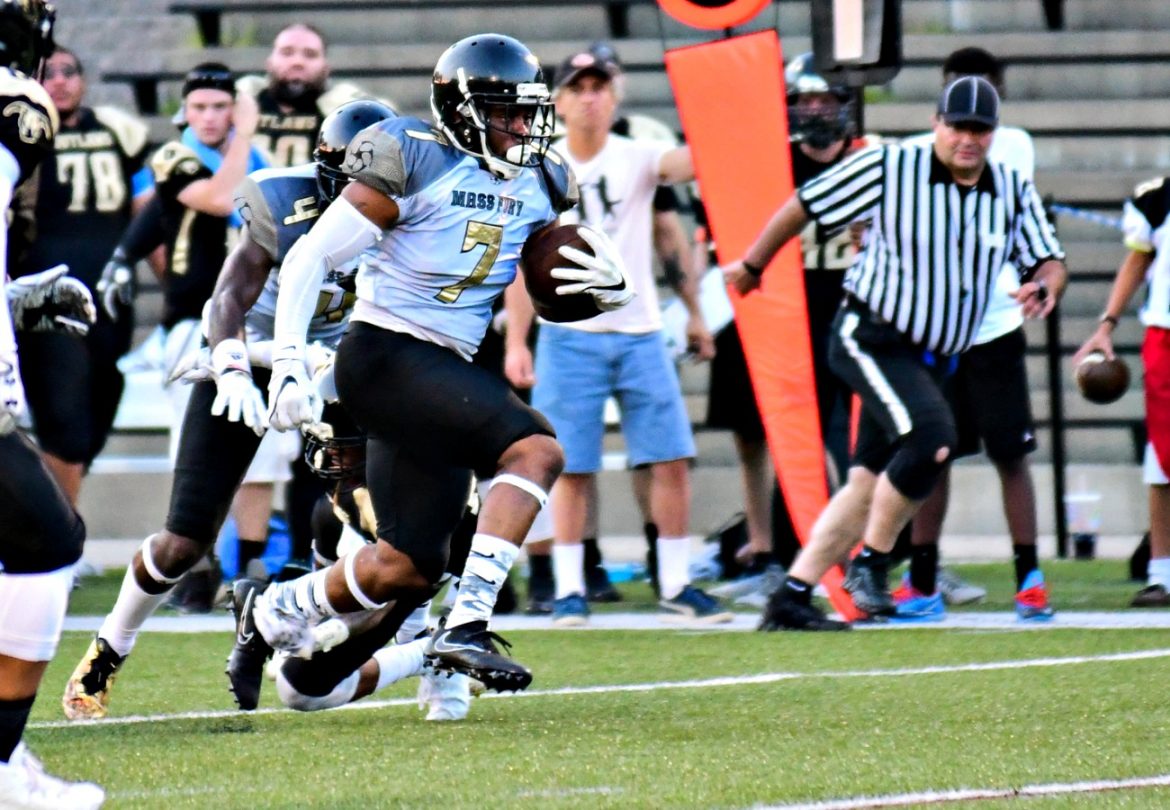 Much of the team’s recruiting, indeed, is done through word of mouth by players who tap former teammates or opponents they respect. One of the team’s captains, Anthony Lucas, found out about the Fury from a few of his former Worcester State teammates. And he’s glad he did.

“It means everything being able to keep playing the game you love and being able to build that camaraderie with guys you’ve known before,” Lucas said. “It helps on the field and off the field with so much diversity. When you run into something, you can keep fighting through it, just like football teaches you to do.”

Off the field, Lucas said the team has events throughout the season. When the team plays on Saturdays, he said there is generally a cookout on Sunday with as many of the guys on the team as possible in attendance.

“It definitely builds great camaraderie and I think that’s why we’ve been doing well this season,” he said. “A lot of the guys are hanging out more and we’re a more tight knit group.”

The team is 6-1 this season, tied with rival Taunton for first place in the EFL. 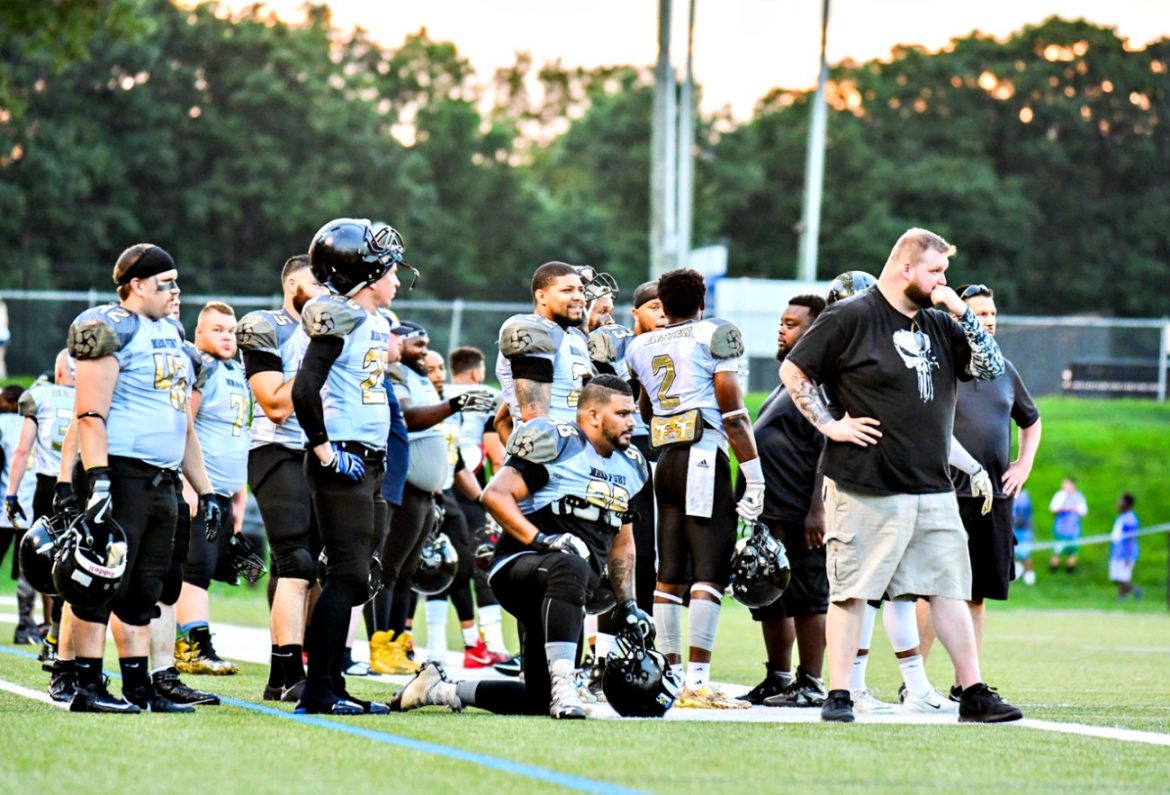 “They’ve all got each other’s backs,” Clemons said. “They come to practice ready to work and practice hard. For the most part, everyone’s getting along and we’re trying to bring back another championship to Worcester.”

Now that highly decorated Worcester State alum Corey Spencer — who led the Division III New England Football Conference with 2,825 passing yards in 2012 — is no longer with the Fury, RJ Vereen has taken over at quarterback.

Vereen graduated from Fitchburg State in 2015, where he was an athletic, scrambling backup quarterback, reserve defensive back and receiver. In the Fury’s 21-13 win over the Quincy Militia on July 29, he had more than 200 passing yards and 100 rushing. 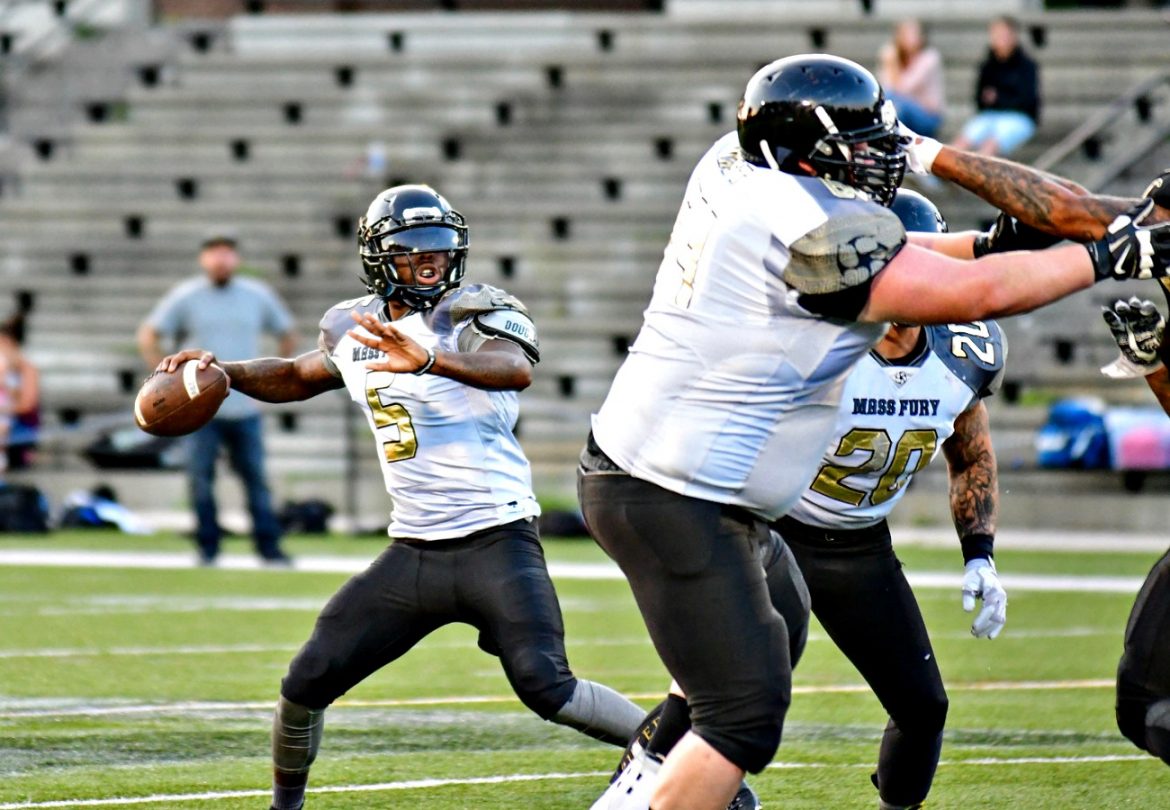 Perhaps the most notable individual performance of the year came when defensive end Milhomme Jean-Charles made team history Aug. 13 by blocking three punts and an extra point against the South Coast Outlaws.

Middle linebacker Brandon Hampton, who was a junior for South High Community School’s undefeated 2006 team, is another one of the Fury’s top defensive players. Unlike high school, he is no longer playing center. That responsibility goes to one the Fury’s top linemen, Joe Thomas, a Becker College alum, who is listed at 6-foot-1 and 295 pounds.

Fellow lineman and special teamer Kyle Lichwell, who played at Fitchburg State, was a member of Assabet Valley’s Division 3A Super Bowl-winning team in 2008.

Although many of the Fury’s players are several years removed from their high school days, there’s at least one player not eligible to buy the team a round at its next outing. Their youngest player is lineman Mark Campbell, 19, who graduated from West Boylston High in 2015. He is in his second year with the Fury.

Clemons said he enjoys having a diverse group of players with different levels of experience who are all committed to winning football games.

“We love it,” he said. “The 30 guys we have are all very good. I would take that over some of the teams with 80 to 100 guys where 60 of them never see the field. The guys on our team all contribute in one way or another and then some guys have to go both ways [play offense and defense].” 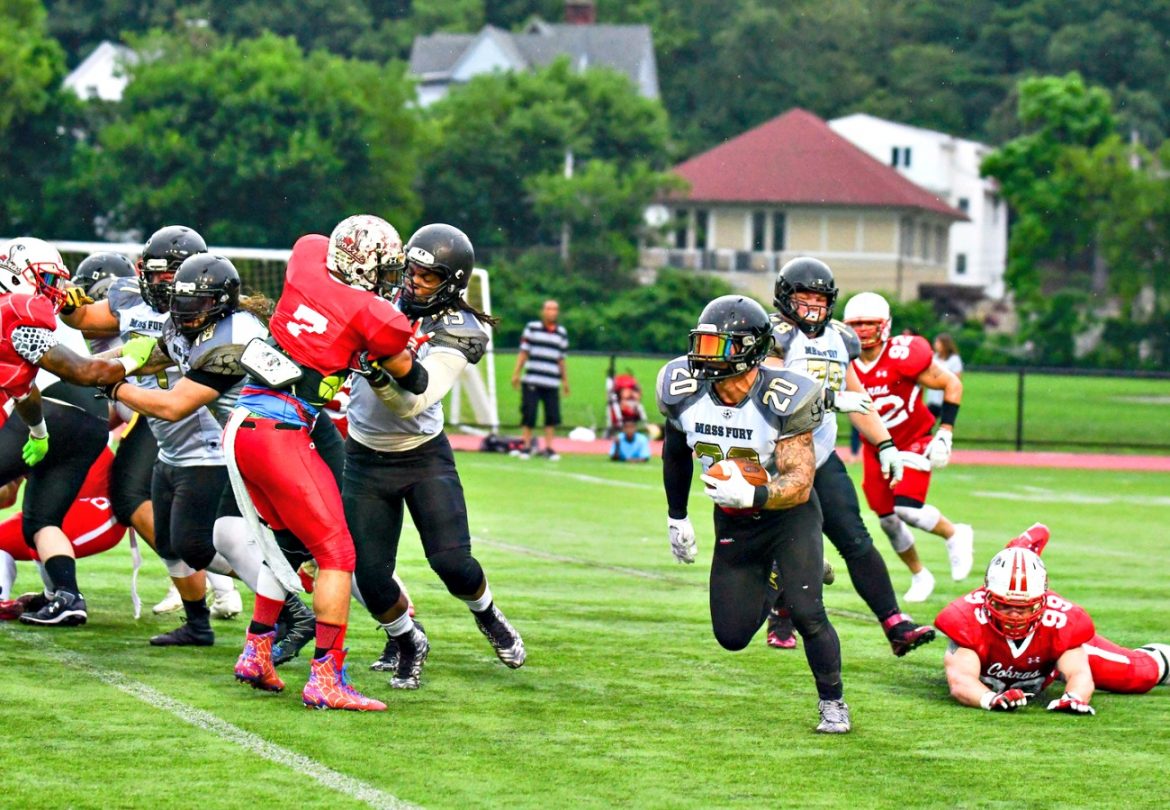 Since the team is not loaded with bodies, the Fury need to be both creative and versatile when putting together their starting lineup. Lucas said when needed, he plays offense, defense and special teams. Essentially, there are games where the natural defensive back never comes off the field and has to play out of position.

Other than a small roster, the issue the Fury battle most throughout the season is their day jobs. Between work and their personal lives, they are limited to just one practice per week because it would be tough for them to do more.

Just a small group of dedicated players wringing out the last bits of talent, competitiveness and desire before football someday passes them by.

The Fury’s next game is scheduled for 7 p.m. Saturday, Sept. 9, against the Boston Panthers at Worcester State’s Coughlin Field.