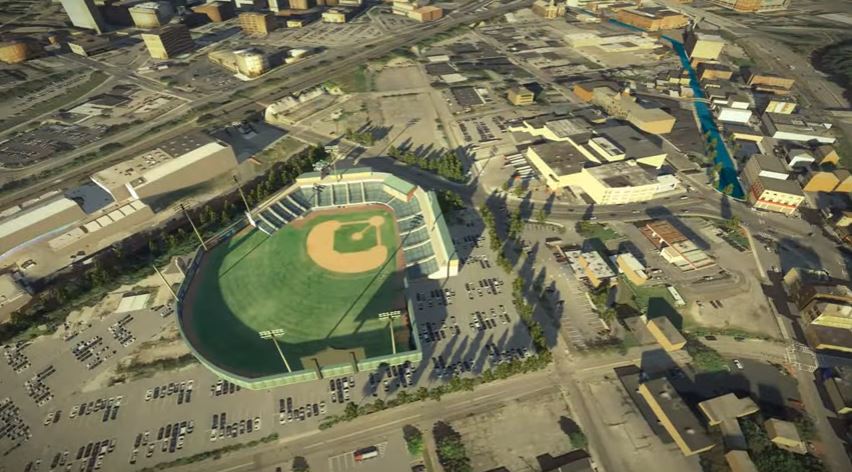 An aerial view of a digital rendering of the potential WooSox ballpark.

Up Next is an occasional preview of the upcoming municipal government and political scene.

While support for the idea of bringing the top Red Sox minor league affiliate to the city is certainly ubiquitous, it is clearly not unanimous. For her part, Councilor at-large Konstantina B. Lukes is saying, “Not so fast.”

And wondering if anyone will hear her.

The one-time mayor and longtime voice of dissent (and often reason) has filed an item on the agenda of the Tuesday, Sept. 5, City Council meeting that brings into question the board’s position on the matter. Or at least, how the council reached its conclusion.

“I don’t know where this council is coming from,” Lukes told the Sun late last week.

The enthusiasm surrounding the notion of replacing the moribund former Wyman-Gordon property in Green Island — sure, now the Canal District Alliance has time for that side of Kelley Square — with a grand ballpark as the new home of the Triple-A Pawtucket Red Sox has enrapt officials at all levels of city government, not to mention dozens of business leaders, commentators and pretty much all the regular folks.

[In fact, 77 percent of voters in a recent Sun poll said they’d be in favor of the move.]

In the swell of that buzz, the City Council hastily passed a resolution by Mayor Joseph M. Petty (and eight other councilors) Aug. 15 to “support in principle” the building of a stadium on 14 acres of long dormant land at Madison and Washington streets. The resolution also implored City Manager Edward M. Augustus Jr. to “do all that is reasonably in his power” to make a deal happen between Worcester and the PawSox.

In a procedural move, Councilor at-large Michael T. Gaffney, vice chair, moved the question to a vote preempting discussion on the proposed resolution. The council then approved the resolution on an 8-1 vote, with Lukes voting no (and Councilors Kathleen M. Toomey and Gary Rosen absent).

“What troubled me,” Lukes said, “was that it sounded like we were making a commitment [to build a ballpark] without any discussion about payment or cost. … If there are details, nobody shared them with us — I need more information than that.”

Bright and early the next morning, Lukes had already fired off an email notice to City Clerk Susan M. Ledoux of her motion to reconsider the question, noting that councilors were prevented from speaking on the matter.

On Saturday, Lukes said she doesn’t believe a deal of this magnitude — “this would be the major public project [in the city] in decades” — should be negotiated in public. She called the mayor’s resolution Machiavellian politics.

“For whose purpose was this put on the table?” Lukes said.

Lukes told NBC Boston Aug. 5 that she was skeptical of the team’s motives. “I think we are being led to the altar, being courted and seduced to get there and we’re going to be left there,” Lukes said last month.

The cost of a proposed 10,000-seat stadium in downtown Pawtucket is estimated to be $83 million, with the state contributing $23 million and the city $15 million. PawSox owners would commit $45 million.

Lukes believes the city would be on the hook for even more, citing potential typical overrun costs of 10 percent to 20 percent. “They always do [go over budget],” she said.

And she still doesn’t believe PawSox ownership has any intention of seriously considering Worcester. “I think they’ve got the best deal possible — and it’s in Rhode Island.”

No guns in schools, cameras for cops

Local activist Gordon Davis filed a number of petitions for the meeting, all of which are likely to be filed (discarded without action) or referred to the purgatory that is council committee review.

The first requests the city explore a policy that would prevent school resource officers from carrying firearms on duty at school. In his petition, Davis notes that the training of Worcester Police officers should be sufficient to “control any situation in Worcester Public Schools without using a gun.” He also argues that the presence of a sidearm sends a negative message to students about their “worth to society.”

A second petition implores the city and police to institute the use of body cameras by officers, arguing that body cameras have “prove[d] effective” in preventing police from false accusations and the public from police misconduct. He also cites successful implementation of body camera use in Boston and Auburn.

Down on downtown update

More from Lukes: The 14-term councilor appears not to be a huge fan of the results of what she refers to as the “so-called renaissance of downtown Worcester.”

She filed a request for a report from Augustus on certain design decisions along Franklin and Foster streets, “which [have] resulted in the construction of unwelcoming combination[s] of unattractive walls of windows.” She also requests “that the Administration consider developing a process of design review to provide Worcester with a more appealing image to residents and visitors and to prevent any further disastrous building designs and layouts.”

Deep in the weeds of the council’s sprawling, first post-summer break agenda is a procedural request to borrow nearly $6 million to be reimbursed by Massachusetts School Building Authority funding to repair and replace windows, doors and some roofing at three city schools.

Tuesday, Sept. 12, polls will be open from 7 a.m. to 8 p.m. in Districts 1 and 5 to pare the candidates for City Council down to two in each area. These districts figure to present a particularly interesting race, with seven serious candidates who bring a diverse list of bona fides and public experience.

In District 5, where Gary Rosen is leaving his post to seek an at-large council seat, 2015 at-large candidate Matthew E. Wally, former statewide candidate Paul J. Franco and youngster Douglas F. Arbetter will vie to represent their West Side neighborhoods. Benjamin D. Champagne is also on the ballot but has not engaged the media in pre-election coverage, nor did he attend a recent candidates forum.

If you’re not sure where to vote, find out here.

The last day for councilors to declare they’re not running for mayor, or for candidates to remove their names from the ballot altogether, is Sept. 19. Voters must be registered by 8 p.m. Wednesday, Oct. 18, to vote in the Tuesday, Nov. 7, municipal election for mayor, City Council and School Committee.