I find it impossible to imagine Walter Cronkite sitting at his anchor desk whining about how he was being treated by the president.

From time to time, I have been known to yell at my television. When the New England Patriots repeatedly try to run the football without success, I have a few choice words for my flat screen. When Celtic players refuse to box out under the basket and get burned for an offensive rebound, my television gets lambasted. Don’t even get me started about what I say when the Red Sox are playing!

My wife always reminds me, “You know they can’t hear you.” But I do it anyway.

Of course, I have something to say almost every time I hear President Trump on television – much of what I say is not printable in a respectable publication.

Lately, I have been yelling more and more at whiny members of the media who constantly display their sensitive feelings because they have been criticized by the president of the United States.

I have enormous respect for the media. I certainly understand how important a free and independent press is to our democracy. The work they do in uncovering wrongdoing (e.g. Watergate, Iran-Contra) is vital to holding our government accountable.

On a day-to-day basis, they question the actions of government officials and then question the answers they receive. Without their dogged pursuit of the truth, our democracy would not stand.

Recently, when the U.S. Senate tried to construct a massive healthcare bill in secret, it was the media who told us what was going on. Without their efforts, we would have no idea what senators were doing – and our country would be all the worse for it.

There are countless examples of how, by doing their job, members of the media have informed the public, exposed wrongdoing and strengthened our democracy. They deserve our support.

In particular, The New York Times and The Washington Post have done incredible investigative work ferreting out the behind-the-scenes actions within the Trump campaign and the Trump administration.

I am a great admirer of the work the media does. But, I draw the line at the media’s incessant whining.

The First Amendment to the Constitution bars government action that abridges the freedom of the press. A strong argument can be made that President Trump and members of his administration have ignored not only historical protocol, but also the spirit of this amendment.

In the past, the Trump White House has limited recordings of press briefings and selected favored reporters to ask questions. President Trump personally denigrates and demeans the media and specific media outlets, calling certain outlets “fake news” in an attempt to undermine the public’s confidence and reliance on the media.

Of course the press should take exception to these activities. But, in my opinion, there is a point at which their complaints become whining. This especially holds true for television news programs.

I watch a number of different TV news stations – including Fox, MSNBC and CNN. I found myself changing channels when the whining got too bad on a particular program. I stopped watching Nicolle Wallace on MSNBC altogether because of her constant whining.

Ms. Wallace and others need to understand that they are not the news. Almost everyone understands what President Trump is doing. Do not fall victim to his trap. By complaining that the president is calling you names, you take your eye off the ball – off of the real story. Stay focused.

There is nothing in the Constitution that says that the media is above reproach. When the media hits an official hard, they should expect a response. If the response is over the top, count on the American people to see it for what it is.

NBC’s “Nightly News” anchor Lester Holt understands how the media should handle Trump’s denigration. As reported by the Associated Press, after witnessing an exasperated reporter confront Sarah Huckabee Sanders about the Trump administration’s hostility toward the press, Holt said, “We can take the hits.”

Of course, he is right. The media is a powerful institution with an enormous amount of influence and the ability to stand up to any world leader. If Trump wants to bash them, they can most certainly take the hit.

So how should the media handle Trump’s denigrations? Simple. Follow the motto of the New England Patriots: “Do your job!” 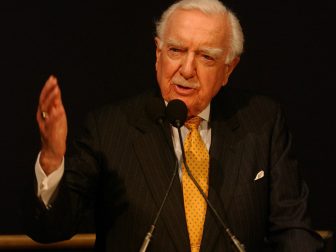 If someone in the Trump administration does something wrong, call them on it. If they try to redirect the story by calling the media names, ignore them and dig in even harder. Their denigrations are a sure sign that the media has a real story to report.

Over the years, we have listened to and read the words of some incredible media figures. Walter Cronkite, Dan Rather, Ted Koppel, Bob Woodward and so many others are people revered for their journalistic work. We have relied on them to tell us what was going on in the world and to keep us informed when we faced our biggest challenges.

I find it impossible to imagine Cronkite sitting at his anchor desk whining about how he was being treated by the president. I simply can’t imagine Koppel asking people to feel bad for him because the president called him names. And it is laughable to think that a young Bob Woodward would lose his focus because someone in the White House called him names.

The American news media does an incredible job. In many ways they have more power and influence than any one leader. That is as it should be.

So, I say to the members of the media: Continue to do the important work we rely on you for. Continue to press President Trump and every other leader when something seems off. We need you now more than ever.

And when President Trump tries to divert attention away from his actions and bully you by calling you “fake news,” do your job and continue to expose him for the conman most of us know he is.

Just, please stop the whining. It is beneath you.

NOTE:  Next week I will take a look at this issue on a local level and discuss the relationship between the local media and city councilor Michael Gaffney.

4 thoughts on “Mariano: The mainstream media needs to stop whining about Trump!”