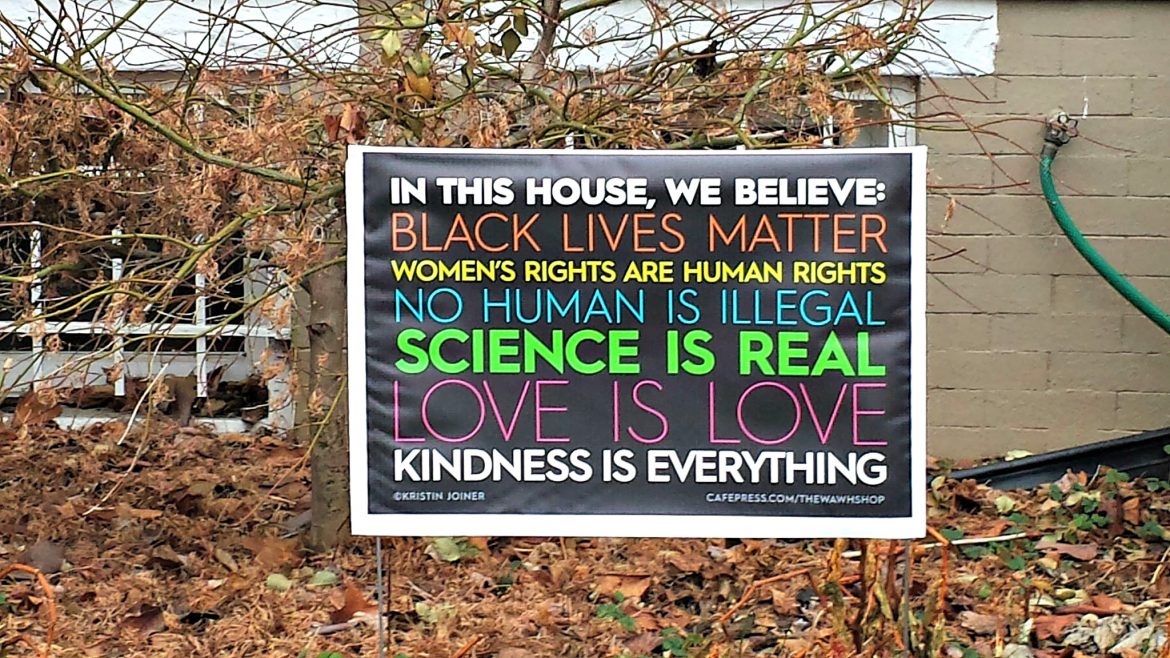 A liberal dose of these types of lawn signs -- is too much for Sinacola to take.

As if the presidential campaign season were not already long enough, and political lawn signs not divisive enough, some Americans in the wake of the 2016 contest have chosen to hang out ideological shingles detailing their core beliefs.

One of the more prominent proclaims that “Black Lives Matter, Women’s Rights Are Human Rights, No Human Is Illegal, Science Is Real, Love Is Love, and Kindness Is Everything.” A variation adds that “Water Is Life” and “Injustice Anywhere Is a Threat to Justice Everywhere.”

The signs are the work of Kristin Joiner, a Wisconsin native and graphic designer now living in Bermuda. According to her website, the signs originated in the wake of the 2016 presidential election. And if there were any doubt that the folks behind them were upset by the outcome, this link (also on Joiner’s website) should settle that.

Perhaps you’re looking for a simpler, multilingual message. If so, there’s the “Welcome Your Neighbors” sign, which originated at Immanuel Mennonite Church in Harrisonburg, Virginia.

It declares: “No matter where you are from, we’re glad you’re our neighbor” — with the same message repeated in Spanish and Arabic.

My fellow Americans, where to begin?

For starters, I mostly agree with the plain text meanings of most of the sentiments expressed on the first couple of signs — provided you strip away the political causes that attach thereto. The claims about race, women’s rights, science, and human sexuality are anodyne until you start asking questions, at which point it quickly becomes clear that the sign owners are claiming a moral high ground that is not nearly as broad as it might appear.

Should you feel, for example, that the Masterpiece Cake Shop should have the religious freedom to decline to make a cake for a gay couple, you’ll be labeled a homophobe. Point out this Newsweek account detailing how 70 percent of Americans think black-on-black crime is a far greater concern than police brutality against black suspects, and you’ll be labeled a racist.

As to the claim that no human is illegal? Nonsense. National borders are a reality, and legal codes are a feature of every nation on Earth. However much we lament the fate of Syrian refugees, the Rohingya of Myanmar, or those imprisoned in North Korea, none of these — or the many other humans who suffer abuse, poverty and injustice — has an automatic, legal claim to residence in the United States. For that matter, I know of no country on the planet that automatically extends legal status to foreigners.

As to kindness, while it’s a lovely thing, it is certainly not “everything.” Your neighbors, passing motorists, and children strolling past your holier-than-thou ground should know there are also lust, gluttony, greed, sloth, wrath, envy and pride.

As to my neighbors, to the extent that our origins color our beliefs, habits and way of life, I have a healthy self-interest in knowing at least something about where my neighbors are from. If they are here illegally — oops, I forgot that “No human is illegal!” — I’d very much prefer if they would return to wherever they came from, and then decide whether to get in line behind the thousands trying to immigrate here legally.

As the sign-makers have chosen to highlight Spanish and Arabic, let me suggest that if I were to have a new neighbor from Central America with the values of MS-13, no number of citizenship papers would alleviate my anxiety. Should someone from the Middle East arrive on my street bringing notions of sharia law or female genital mutilation, I’d not be terribly welcoming.

To be sure, new Americans cannot necessarily be identified with the cultural and religious values of the lands of their birth, and a very small percentage of legal immigrants to our nation (or the illegal aliens living here) are weighted with the beliefs outlined above. Many come here precisely to escape such things and forge new identities as Americans. To the (legal) ones, I say Welcome!

But I won’t be putting out signs. I’ll be knocking on their door, waving to them over the fence, sounding them out, getting to know them a bit better. With luck, they’ll prove to be good neighbors. That’s more or less how American neighborhoods have always worked.

You may prefer to put up a sign to let the world know how ideologically correct you are. But I doubt you’d have done so had the election gone differently. At this point, all you’re doing is further dividing the neighborhood.