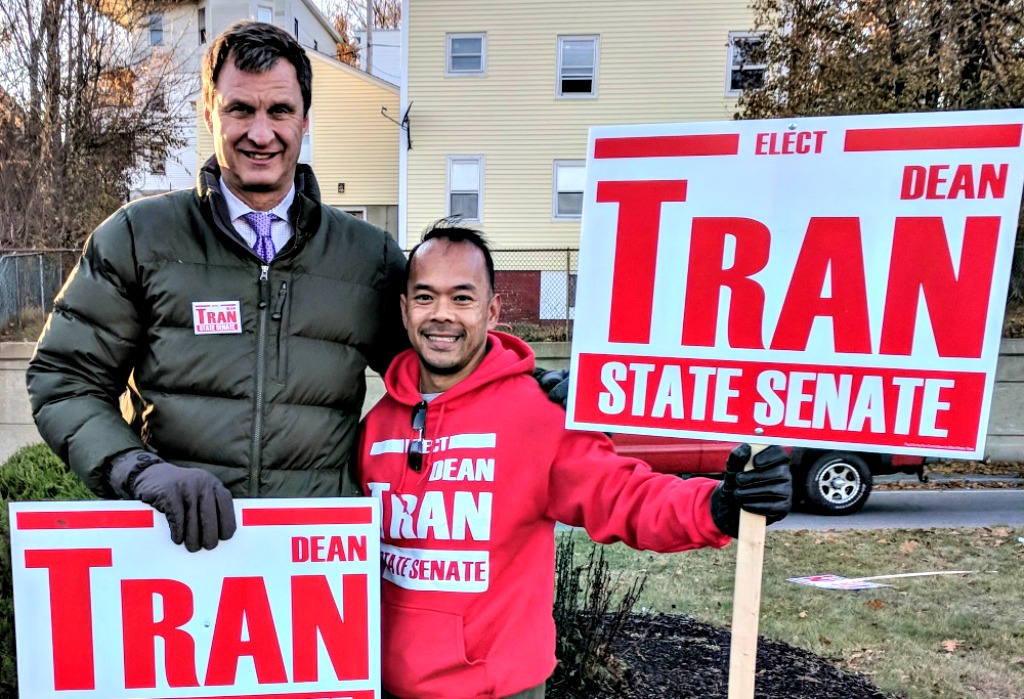 Gov. Charlie Baker has tried, against the odds, to grow the Republican Party since his 2014 election, but oftentimes that means siding with candidates that don’t perfectly align with his brand of moderate, socially liberal Republicanism.

That conflict is rearing its head again two weeks before a special Senate election in north central Massachusetts as the state Democratic Party is calling on the governor to withdraw his support for Fitchburg City Councilor Dean Tran over comments the candidate made during a debate last weekend.

Tran, a Republican who lost a race for the House in 2016 despite Baker’s support, said he did not believe tax dollars should be spent to support Planned Parenthood, in contrast to Baker who pledged to tap the state budget if Congress followed through on threats to block Medicaid recipients from receiving care from the organization.

Tran also said he has serious concerns over whether the transgender anti-discrimination law signed by Baker adequately protected children.

The situation is reminiscent of a special Senate election that was decided earlier this month during which Democrats called on Baker to rescind his endorsement of Jacob Ventura of Attleboro over the Republican’s positions on Planned Parenthood, gay marriage and other social issues.

Baker, in that case, said he disagreed with Ventura on those issues, but did not withdraw his support. Ventura ultimately lost to Democrat Paul Feeney.

Over the weekend, Tran participated in a debate on cable access with Democratic nominee Susan Chalifoux-Zephir and independent Claire Freda.

Tran, an at-large city councilor, boasted of the “direct line” he would have to Baker if elected as a Republican, and what it would mean for the region.

“I will work closely with him to better the district by bringing additional funding and projects to the district that will help create jobs and improve infrastructure,” Tran said. He specifically cited his desire to work to expand Route 2 from four lanes to six.

When asked about Baker’s past pledge to provide state financial support to Planned Parenthood, Tran said he would prefer not to see public dollars go to the national sexual health care organization.

Tran acknowledged opposing the location of a Planned Parenthood clinic on Main Street in Fitchburg, but said it was because he didn’t want a “duplication of services.”

Describing himself as a “staunch supporter for women’s health” with three sisters and three daughters, Tran said Planned Parenthood results in federal funding being taken away from local health clinics like Community Health Connections and Care Net Pregnancy Resources Center, which does not offer abortions or abortion referral services.

“I would prefer any public funding proposed to go to Planned Parenthood to be directed to local health clinics and organizations,” Tran said.

Tran also raised concerns with the bill the governor signed protecting transgender individuals from discrimination in public accommodations, including public restrooms. But he didn’t say explicitly whether he would support an effort by opponents to repeal the law on the 2018 ballot.

“I’ve been discriminated [sic] my entire life, even today as an elected official. I know what it’s like to be discriminated, and I would never discriminate anyone regardless of race, age, gender or economic status. However, I have some concerns about the lack of protections of children against sexual predators,” said Tran, a Vietnamese immigrant who was brought to the United State as a young boy.

Tran said maybe the law should be looked at again, and offered one possible solution as “unisex facilities with stalls.” Gwen Meunier, Tran’s campaign manager who also happens to be transgender, said the candidate favors more discussion, but did not know how he would vote on the ballot question. “I can personally vouch that he doesn’t discriminate against anyone,” Meunier said.

Tran’s comments during the debate, however, were enough to draw a rebuke from the Democratic party.

“Charlie Baker can try to say all the right things about how he supports women, access to health care, and civil rights, but he’s thrown his endorsement behind Dean Tran and his unapologetic, extremist positions on women and the LGBT community,” Massachusetts Democratic Party Chairman Gus Bickford said in a statement. “The governor can’t have it both ways. Either he supports women and the transgender community or he supports Dean. It’s time to choose, Governor.”

The broadside came as Baker was preparing to sign legislation Monday afternoon that would guarantee a woman’s right to insurance coverage without co-pays for birth control and over-the-counter emergency contraception.

Baker political advisor Jim Conroy said not all candidates the governor endorses share his every position, but they often align on many issues, including fiscal policy.

“The Governor disagrees with Dean on these issues, which is why he signed transgender protections into law and has worked to preserve funding for Planned Parenthood,” Conroy said in a statement responding to the Democrats.

That bill, which passed the House and Senate last week in response to actions taken by the Trump administration, did not come up during the hour-long debate on “FLAP TV in Focus,” a public access show focused on politics in Fitchburg and Leominster.

Chalifoux-Zephir and Freda, both Leominster city councilors, and Tran are running for the Worcester and Middlesex district Senate seat that had been held by Jennifer Flanagan until she was named by Baker to the Cannabis Control Commission.

The election is scheduled for Dec. 5.

Tran also said he opposed a proposed constitutional amendment to impose a 4 percent surtax on income above $1 million and supports lowering the sales tax, two ballot issues on which Baker has not yet taken a firm position.

Tran said he could see eventually supporting a complete elimination of the sales tax in Massachusetts, but he also took a position unpopular with Bay State Republicans in support of allowing undocumented immigrants to pay in-state tuition rates to attend public universities, arguing that many children were brought to this country by their parents at no fault of their own and should not be punished.