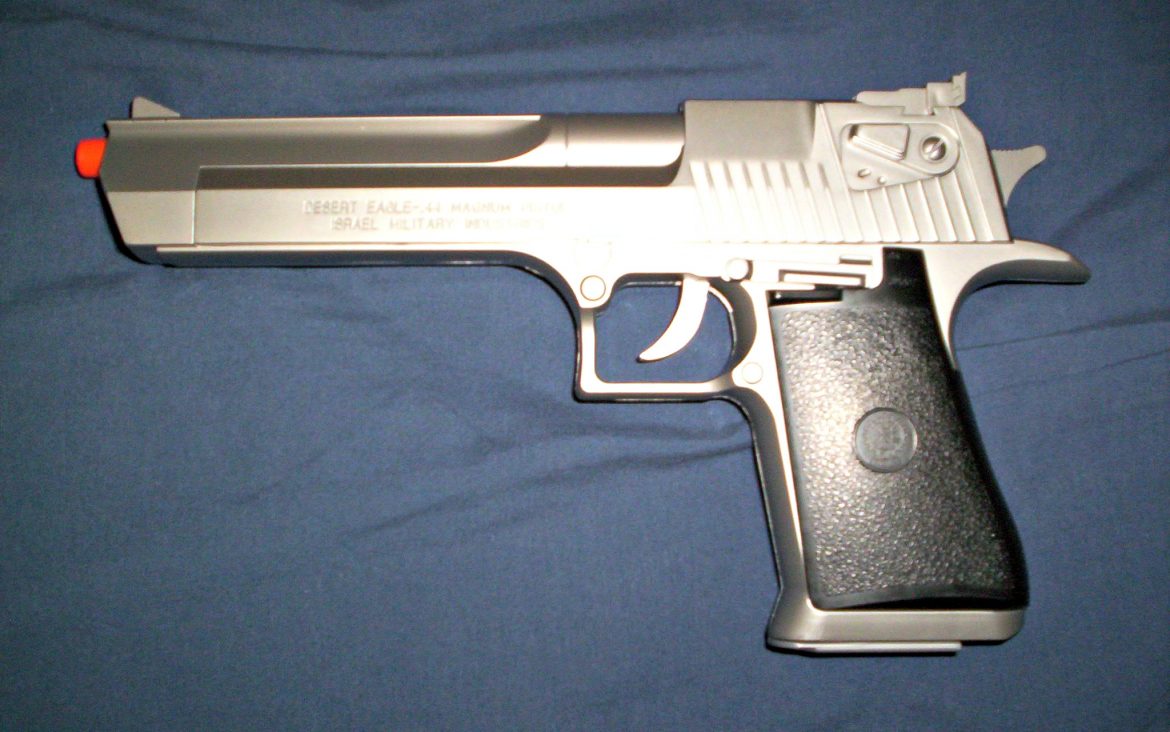 Not all Airsoft guns, like this Desert Eagle .44 Magnum, come with the telltale orange tip. Where's the sense in that?

Better laws, and better sense by the public, should be preventing what almost happened in Spencer last week.

A toy gun could have caused a shooting from a real one during a routine traffic stop.

Tuesday night, officers pulled over a car on Meadow Road in Spencer for speeding, according to a Facebook post by the Spencer Police Department. “The rear seat passenger of the vehicle was reaching for the floor as the officer approached,” the post reads. “It was obvious that the occupants had smoked marijuana from the strong odor that came from the interior.”

The officer noticed what looked like a holster for a firearm on the floor of the vehicle, and ordered all three occupants to step out.

The ensuing search turned up a toy airsoft-type gray revolver with a gold handle lying on the car floor. The extremely realistic-looking item even had a cylinder containing ejectable, pretend shell casings. Only by its light weight could the officer tell it was just a toy.

“This was beyond real-looking,” Spencer Police Chief David B. Darrin later told a reporter.

The chief said that if one of the people in the car (none of whom were charged with any violations) had decided to pick up the toy gun, “We would have been in a position where we would have drawn our guns, and who knows what could have happened?”

Of course, we all know what could have happened.

Similar scenarios have occurred elsewhere around the country in recent years, with sometimes tragic consequences. According to an analysis by The Washington Post, at least 86 people were killed by police over the two-year period of 2014-2015 after police mistook a BB, AirSoft or similar toy gun for the real thing.

It’s unfortunate that a bill that would have required an orange stripe be painted on these kinds of toy weapons, to help distinguish them from genuine firearms, stalled last year in the state Legislature. It should be revived, or similar measures helping to clearly delineate toy guns from actual ones should be proposed.

In the United States, toy guns are sold with an orange tip to help make them instantly recognizable as toys. But not everyone is familiar with that convention; and, worse, many owners remove the orange features on the toys. The one confiscated Tuesday in Spencer did not have one.

There is absolutely no reason such incredibly realistic-looking toy guns are being manufactured and purchased in the first place.

Many of us can accept some inherent dangers of such toys; there is the long-known and genuine risk of eye injuries from BB guns, for instance. But there is no reason for anyone to play with guns that have any chance of being mistaken for the real thing. The physical dangers are obvious; a police officer or another person with a genuine weapon could shoot in self-defense.

And — if we are to further a more peaceful, respectful world — many also question the wisdom of allowing or encouraging young people to equate guns with fun.

We cannot always count on laws to protect us, nor, of course, profit-motivated manufacturers and stores. But there’s no excuse for our own common sense to fail.

Toy guns for airsoft sports, paintball, target practice and other purposes should be used only in recreational areas designated for such purposes. Anyone who does own a realistic-looking toy gun should use precautions: Keep its orange plastic tip on to identify it as fake, and keep it in a bag or case when not in use.

As it is, the real guns in America are all too real.

Last Tuesday’s traffic stop in Spencer was an eye-opener. It’s fortunate everyone stayed safe in this instance, and the police did a valuable public service posting pictures of the toy gun on social media.

With Thanksgiving past, holiday shopping is in full force. We would bypass the toy stores’ shoot-’em-up-themed aisles in shopping for a young person we love. But parents, as they always have, will continue to buy toy guns for children who — as they always have — will clamor for them.

In that case, we urge parents to make sure the toy gun looks like a toy — made of cheap plastic, in neon colors and cartoonish and oversized shapes, designed for innocent play involving imaginary bad guys.

29 thoughts on “Editorial: A toy that’s too real”