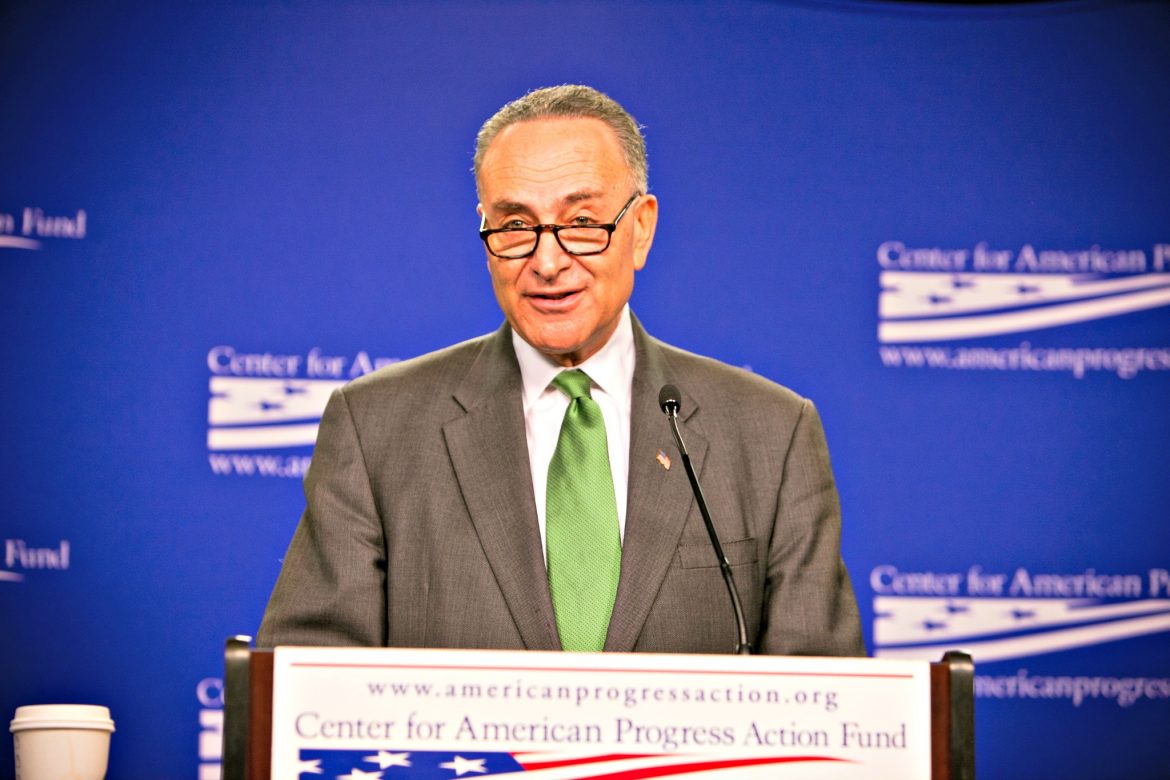 National Democratic leaders, like Sen. Chuck Schumer, have some work to do, Ray says.

A few months ago, I wrote a column complaining that the Democratic Party was becoming the party of “no” and had no discernable agenda. I wrote that Democrats were doing exactly what they complained Republicans had done to President Obama – blindly opposing everything President Trump proposed without offering an alternative that people could rally around and that they were willing to fight for.

I never submitted the column for publication. I kept waiting for Democrats to come to their senses and propose some sort of agenda – anything that showed what they stood for.

Chris Matthews of MSNBC reasoned that the Democrats’ lack of an agenda comes from their belief in a “seesaw effect” – where one side hopes that by bringing the other side down it will raise them up. He thought it was a big mistake. So do I.

Even though polls continue to show Trump has become increasingly unpopular, it has not helped raise voters’ opinions of Democrats. They continue to lose most elections.

Today, Republicans control the White House, both branches of Congress and 34 governorships. In my opinion, this Republican dominance has everything to do with the Democrats’ message – or lack of one.

Allow me to put this into context.

Think about the most recent presidential election. Everyone knew what Donald Trump stood for. He wanted to build a wall along the Mexican border and deport illegal immigrants; he was going to fight to bring jobs back to America; he wanted to repeal and replace Obamacare; and he promised to “drain the swamp.” Most importantly, he promised to shake things up.

Yes, he had positions on other issues, but he had three or four key proposals that he repeated over and over again. He even had the crowds at his rallies chant key phrases from his proposals (“build the wall” or “drain the swamp”). We all knew exactly what he wanted to do if he was elected. And Trump was smart enough to pick those issues that struck an emotional chord with voters.

Hillary Clinton and the Democrats had detailed positions on every possible issue. Painstakingly crafted, these positions were vetted by some of the nation’s leading experts. Yet, when she hit the campaign trail all she ever seemed to talk about was how awful it would be to have Trump in control of the nuclear codes — hoping for the “seesaw effect.”

Even if you believe she was 100 percent correct, she lost – in large part because she had no cohesive, positive message to attract voters. I realize she won the popular vote, but think about it, this election should not have even been close.

Despite all of his boorish behavior, Trump won the election. Why? He had a coherent set of issues that struck a chord with middle America. And Clinton, like the producers of “La La Land,” ended up stunned standing on stage while Trump carried home the trophy.

Even Senate Minority Leader Chuck Schumer, D-N.Y., acknowledged that the Democrats’ lack of a coherent message cost them the presidency.

“When you lose an election with someone who has, say, 40 percent popularity, you look in the mirror and say, ‘What did we do wrong?’ And the number one thing that we did wrong is that we didn’t have – we didn’t tell people what we stood for,” Schumer said on ABC’s “This Week.”

Now we are stuck with Donald Trump as our president, and Democrats are all still doing the same thing: complaining that Trump is the worst thing that has happened to our country in 50 years, hoping that by bringing him down it will raise them up.

The recent election for governor in Virginia offers some hope to Democrats that voters are tiring of President Trump. Republican Ed Gillespie ran a campaign focused on simple Trump-type issues and against establishment politics – focusing on immigrants in the country illegally and preserving Confederate statues.

But no Republican has won statewide in Virginia since 2009, and they have had a steadily declining share of the vote since then. In 2016, Hillary Clinton beat Donald Trump by six percentage points. On Election Day 2017, Democrat Ralph Northam won easily.

But a single campaign victory, even several victories, is hardly cause for national celebration.

Recently, I received a fundraising letter from the Democratic National Committee. The letter discussed, in great detail, that it was important for Democrats to win! But, the letter never said why that was so important – not once.

Democrats need a bold message that connects with average Americans.

Crafting a message is not an easy task. First, the message needs to be broad enough to appeal not just to the party faithful, but also to those voters who are unaligned with either party.

For the past decade, the Democratic Party has been losing voters who used to be the bedrock of their support: blue-collar workers, even union members.

In 1994, then-Minority Whip Newt Gingrich and Chairman of the House Republican Conference Dick Armey came up with a “Contract With America.” Their contract was signed by all but two of the Republican members of the House and all of the party’s non-incumbent Republican congressional candidates. The contract listed a series of eight key issues that Republicans would commit to once they controlled the House.

Gingrich’s contract was a brilliant piece of marketing. Introduced six weeks before the midterm elections, it nationalized congressional races and resulted in the Republicans winning an additional 54 House and 9 Senate seats.

Recently, it appears that Democrats have decided to develop their own agenda, titled “A Better Deal.” Led by Schumer and House Minority Leader Nancy Pelosi, D-Calif., the agenda is an attempt to bind the blue-collar and progressive wings of the Democratic Party with a unifying economic message based on “kitchen table” issues.

Schumer said the new agenda would be “strong,” “bold” and “cutting-edge.” Unfortunately, the Democrats’ new agenda is hardly that. But I guess it is a start.

This new agenda includes an effort to create more jobs by expanding apprenticeships and providing tax credits. It also includes lowering prescription drug prices and cracking down on corporate monopolies in order to create more competition. Schumer said more proposals will be released over time.

Other economic proposals previously mentioned but not yet formally announced include increasing the minimum wage and a significant infrastructure program, both of which will benefit working-class Americans.

I believe this new agenda needs much more.

It should also acknowledge the deep anger and frustration many Americans feel about our political system. The Democrats’ agenda should focus on taking the stink out of politics, by removing big money from corrupting our elections (Citizens United) and imposing tougher ethics regulations for elected and appointed officials.

It should include commonsense reforms that help make Congress work and require that members of Congress go to work.

More Mariano: 8 reforms to give Congress back to the people

On April 12, 2014, as he was considering running for president, Trump gave a speech to the New Hampshire Freedom Summit in Manchester. “The problem with politicians, (they’re) all talk, no action. It’s true. All talk; it’s all bullshit,” he said. Audience members stood up and cheered.

It is that frustration and anger, at our officials in Washington, that propelled Trump to the White House. The new Democratic agenda needs to acknowledge that emotion or it will fail to attract blue-collar voters.

Rather than fighting among themselves and with disgruntled people like Donna Brazile, Democrats need a unifying agenda and a message that shows the American people what they stand for – who they are willing to fight for. Democrats must offer a vision of hope.

So far, Democrats have spent almost all of their time telling everyone how awful it is to have Donald Trump as our president. I understand that urge. But if Democrats become the party of “no” it may not be only four years of Trump; it could be eight.

Beyond that, if you assume Trump will self-destruct, there is still the matter of control of the Congress.

For several years the leaders of the Democratic Party have been tone-deaf to the increasing frustrations felt by average Americans.

If there is a lesson to be learned from these past campaigns, it is that Democrats need a message, an agenda – one that connects with people in every state of our union. Their “A Better Deal” is an acknowledgment that they need to reconnect with issues average Americans care about. Now they need to put their proposals together and get to work.

The stakes are very, very real.