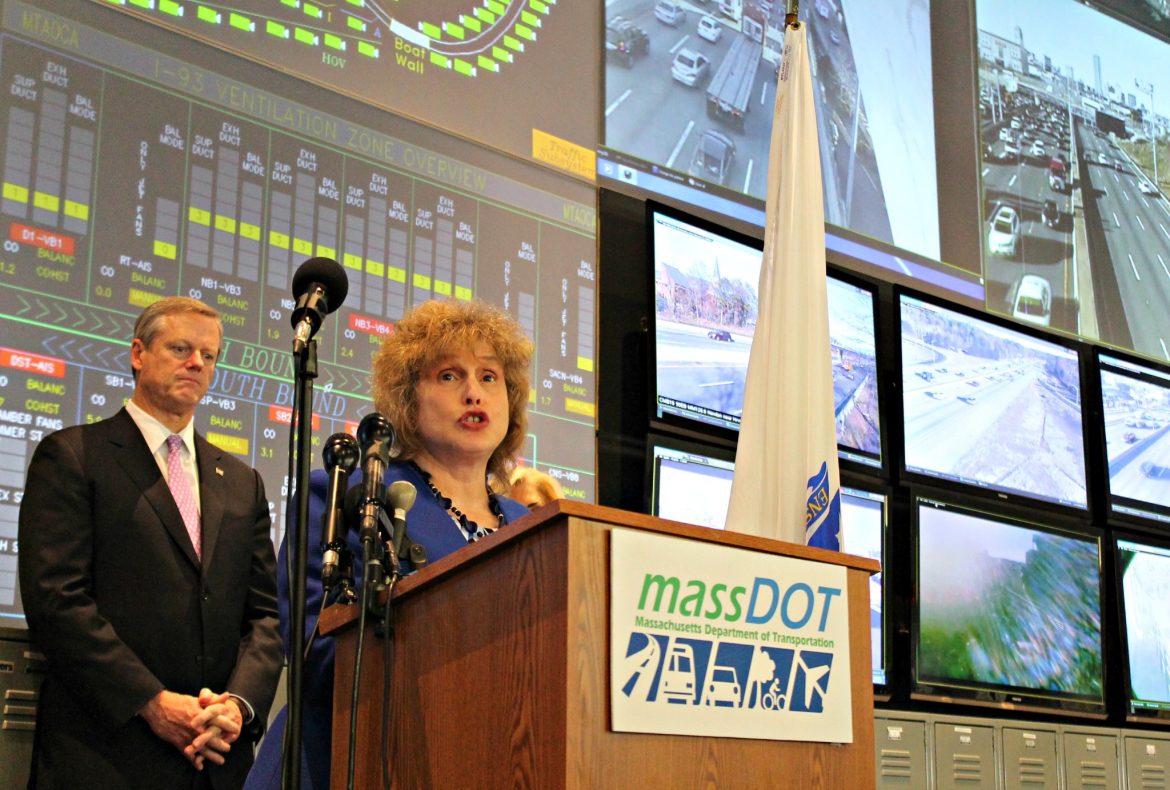 Lower speed limits in highway work zones are just suggestions — for now, Transportation Secretary Stephanie Pollack said at a press conference Tuesday. "You can only be ticketed if you're actually going faster than the underlying speed limit for the road," she said. Gov. Charlie Baker announced he is filing a bill to allow enforcement of the lower limits.

BOSTON — An estimated 51 million Americans were projected to travel more than 50 miles to celebrate Thanksgiving this year.

A fair number of those hit the Massachusetts highways newly confident, if they didn’t know before, that if they could escape the traffic for just a few miles those reduced speed limits posted in work zones along the route were merely “suggestions” and nothing that could legally stop them from getting to their turkey faster.

Gov. Charlie Baker made that point clear while standing in front a giant bank of monitors showing pockets of traffic starting to form Tuesday afternoon as he announced a package of highway safety initiatives he hopes legislative leaders will move to their front burner.

The ability to legally enforce reduced speed limits in work zones was one. But it wasn’t the talker.

Just this past February, Baker was on the radio when he said he thought texting while driving was the real danger on the roads. “I’m not sure I believe that the talking thing is,” he explained.

The governor, however, is no longer willing to take the risk that he could have been right, citing the volume of fatal car crashes that can be attributed to distracted driving and advances in technology and pricing that have made hands-free devices more accessible than ever. Those free hands, advocates hope, can stay gripped to steering wheels.

Baker called on the Legislature to deliver to his desk a bill before next summer that would make Massachusetts the sixteenth state to ban the handheld use of cellphones while driving. (Every other state in New England, except Maine, and New York have already done so.) And just like that, a driving safety bill climbed up the ladder of issues to watch for in 2018.

The governor’s new point of view changes some of the Beacon Hill politics over the long-filed bill, ratcheting up pressure on the House.

“I’m very pleased to see his comments,” Sen. Mark Montigny told the News Service. “But the only thing that should change the political dynamic is 15 years of death and destruction on the highways.”

Montigny, of New Bedford, still remembers vividly having to settle in 2010 for a ban on texting while driving. The Legislature wasn’t ready then to go all the way, and Montigny almost voted against his own bill because, as police would later complain, he believed the texting ban to be virtually unenforceable if people would still be allowed to handle their devices to phone a friend.

In the Senate, a hands-free bill already won approval in June, and because of Baker, Montigny has been imbued with new hope. “I’m glad the governor’s on board,” he said.

The pressure now shifts to the House as the lone holdout on a topic that from an experiential standpoint resonates with most voters/drivers. House Speaker Robert DeLeo said he would be speaking with his Transportation Committee Chair Rep. William Straus in the “near future” about how to proceed.

In the meantime, Baker had bills sitting on his desk that merited his attention, and the signing spree started Monday with an elaborately staged ceremony to make the contraception “ACCESS” bill law.

“This is a great day in the commonwealth of Mass.,” the governor declared from a podium set up in the rarely used State House library, flanked by leaders of the House and Senate, Attorney General Maura Healey, Treasurer Deb Goldberg, the head of Planned Parenthood and more. 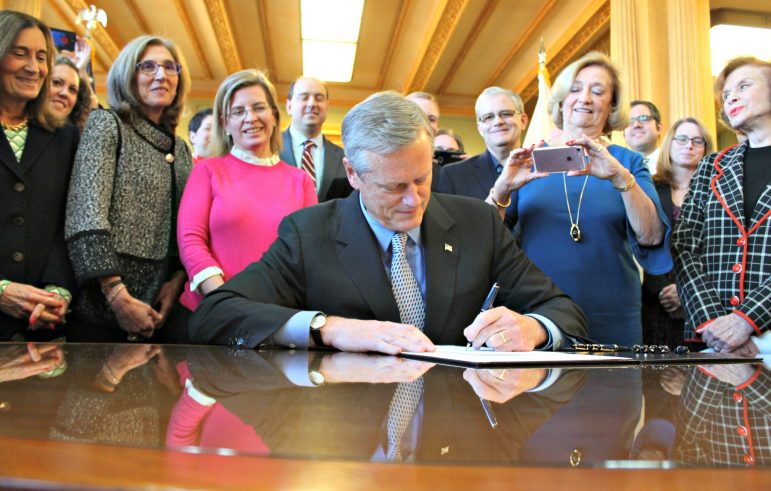 Don’t be surprised if this image makes it into campaign literature next year, the governor standing front and center as the state’s almost exclusively Democratic power brokers, plus the governor, delivered a message to President Trump’s Washington that birth control would remain free and covered in Massachusetts no matter what happens to Obamacare.

This is shaping up as a fascinating election year — Baker trying hard to stay in good graces of State House Democrats, his opponents trying just as hard to Velcro him to Washington Republicans.

Lawmakers are starting to see the fruits of the labor they exhibited before formal sessions expired for the year on Nov. 15. Democrats tied up loose ends on two priorities — more flexibility for English language learners [see story below] and access to free birth control — and found in Charlie Baker a receptive Republican governor as he signed both bills into law.

Baker, who has found the Legislature not always as receptive to his many offerings, this week has an opportunity to push for one of his measures that the majority party might get behind: a major new public investment in the life sciences sector that’s up for a public hearing on Thursday in Worcester.

And the House is using its holiday season lull to ramp up the heft of its exploration of sexual harassment. House chief legal counsel James Kennedy informed representatives Nov. 14 that he’s retained employment law experts Paul Holtzman and Jill Brenner Meixel of Krokidas & Bluestein and Martha Coakley and Jennifer Kirby of Foley Hoag. They are working with his office as it reviews House human resources policies relating to sexual harassment and retaliation.

As the former attorney general is engaged in that issue, current Attorney General Maura Healey is looking into the State Police’s handling of arrest reports after two of the force’s top officials resigned, and Baker has suggested a role was played by the Worcester District Attorney’s office in the case involving changes to an arrest report for Alli Bibaud, the daughter of a district court judge known to be a friend of DA Joe Early Jr.

We will not turn our backs on immigrants and we will NEVER back down from President Trump or his administration. pic.twitter.com/VgD7yDgxkW

The lack of funding for school-based drug education in Gov. Charlie Baker’s latest opioid abuse treatment and prevention bill has left Attorney General Maura Healey “disappointed” that the administration did not put more money on the table.

“I think that there are some good things there, but I also have a particular focus on prevention and education and treatment and I was disappointed to not see more,” Healey said responding to a caller last week during her appearance on WGBH’s Boston Public Radio.

Healey said on a recent visit to a recovery high school, the teenagers who had been sent there from drug courts said universally that they were not taught about the dangers of opioids in school before they became addicted. 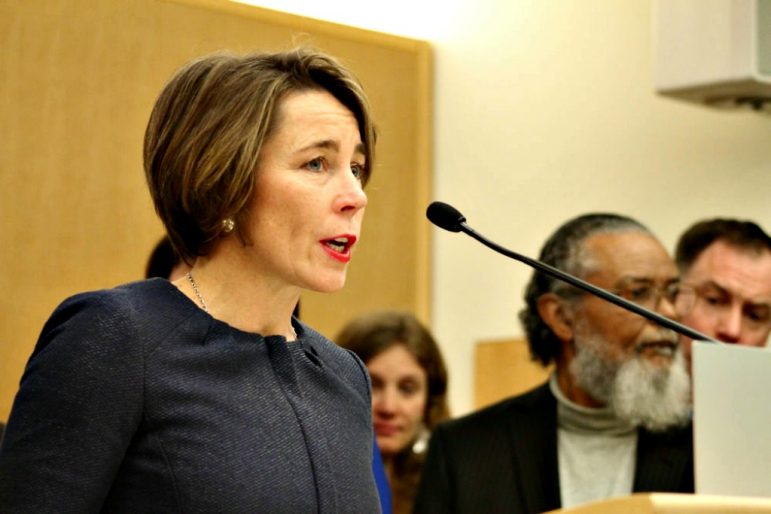 Healey explained how her office has made $3 million available to schools for education and prevention programming. She said, “But I know that the need is greater than that and that’s why I’m disappointed that we don’t have a proposal to fund universal prevention and education in schools.”

Baker’s bill introduced this month proposes a variety of new steps to fight the epidemic, including increased access to treatment beds, making Narcan available over the counter and allowing emergency room doctors to send patients for addiction treatment against their will for up to 72 hours.

The administration also said it would work with universities to make opioid education a part of all freshman orientation programming and establish a grant program to help schools identify at-risk students and develop intervention programs.

To fund some of these initiatives, Baker said he would divert $30 million from the state’s federal Medicaid waiver to expand residential recovery, add recovery coaches and increase access to medication-assisted treatment.

Massachusetts schools will now have more options for how they educate students learning the English language, under a bill Gov. Charlie Baker signed into law Wednesday.

A 2002 ballot law required English learners to be taught in sheltered immersion programs. Under the new law, school districts will be able to continue to use immersion, but will now also be able to choose a different approach to meet their students’ needs, subject to approval by state education officials. 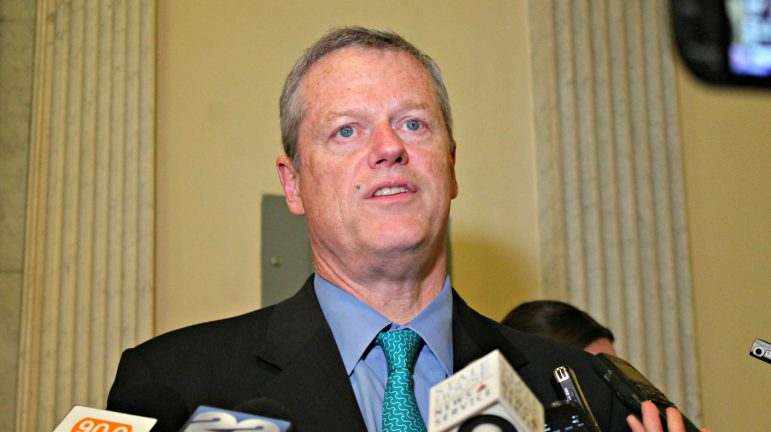 The 2002 ballot question passed 68 percent to 32 percent after a campaign that stressed the benefits of children learning English as quickly as possible. Supporters of the bill Baker signed (H 4032) have argued the ballot law is overly restrictive and has not helped close the achievement gap between native English speakers and their peers who are still learning the language.

The number of English learners in Massachusetts schools has doubled to more than 90,204 students, or 9.5 percent of the student population, since 2000, according to House Speaker Robert DeLeo’s office.

Baker signed the bill Wednesday morning without a public ceremony. In a press release, he said the new law “preserves an existing approach that works well for many students, while providing school districts with the opportunity to adopt alternative, credible ways to teach English that may be more beneficial for certain students.”

The governor said the current immersion system “works extremely well for tens of thousands of students,” but that there are other students for whom it is not effective. The governor’s comments fueled speculation about whether he would sign the bill, or seek to amend it perhaps.

The bill was originally filed by Sen. Sal DiDomenico and House Ways and Means Chairman Jeffrey Sanchez, who had both been pursuing the issue for years. The final version passed the Senate unanimously and the House on a 155-1 vote Nov. 16.

Under the bill, the Department of Elementary and Secondary Education will also be charged with developing “seals of biliteracy” for high school diplomas to recognize students who are proficient in English and another language.

Senate Ways and Means Chairwoman Karen Spilka said during discussion of the bill last week that the seal would indicate to colleges and employers that the student has an important skill, and that students in dual language programs are more aware of other cultures and better prepared to compete in a global environment.

The law also creates parent advisory committees at schools with a high concentration of English language learners, and “raises expectations for data collection and program evaluations,” according to the governor’s office.

“Over the past six years the state undertook a comprehensive strategy for raising standards, training teachers, and evaluating program quality. As a result of these efforts, many students are building their English language skills at a faster pace,” Education Secretary James Peyser said in a statement. “Although Sheltered English Immersion is succeeding for many students, it is not succeeding for all students. English language learners are not all the same.”