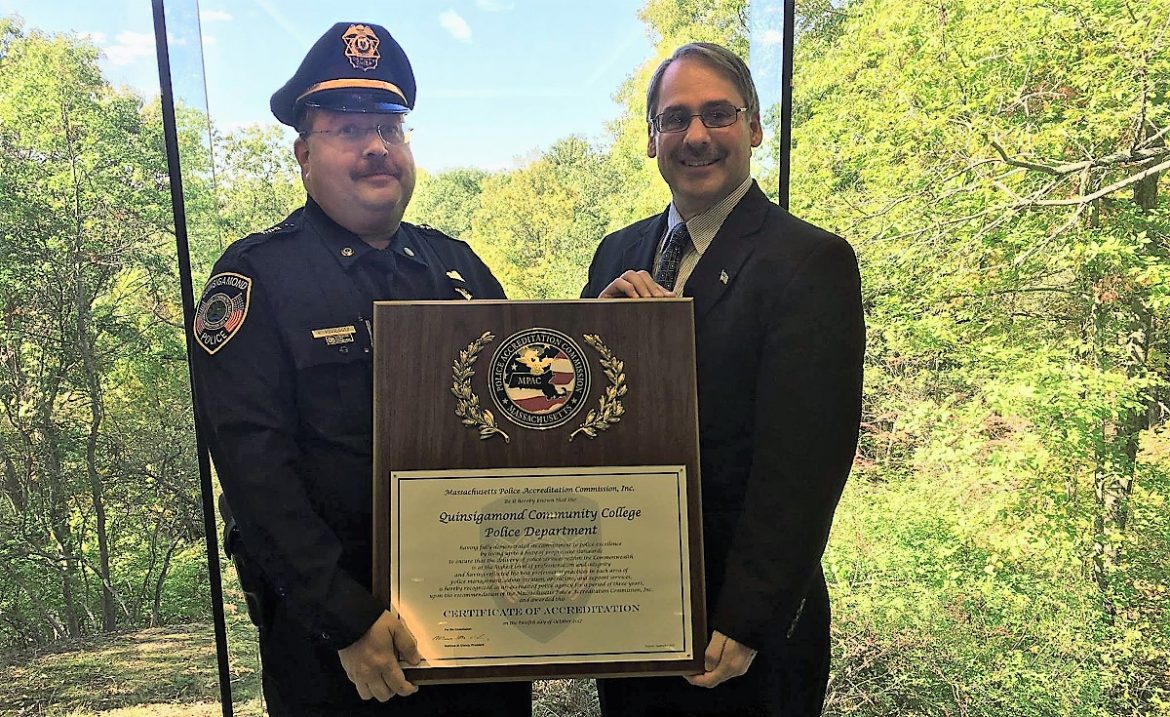 Students enrolled in Becker’s pre-law program can now go from classroom to courtroom in just six years. Becker and UMass School of Law at Dartmouth signed an articulation agreement that will allow Becker’s most talented pre-law students to complete both their undergraduate studies and law degree in six years, instead of seven.

“This is a great new program which allows students to enter law school in their senior year and save time and money in the process,” said Ursula Furi-Perry, Becker’s assistant dean of the School of Nursing and Behavioral Sciences, who heads the departments of Criminal Justice/Legal Studies. “UMass in particular is a wonderful partner because of its intense focus on social justice and access to justice issues which resonate with our students.”

Participants of the 3+3 program must successfully complete the first three years of the undergraduate studies at Becker and meet UMass Law matriculation requirements.

“Becker has a really innovative pre-law program with an internship requirement, so the students will be really well-prepared for law school,” said Eric Mitnick, dean of UMass School of Law at Dartmouth.

Becker students may apply to the program at the end of the first or second semester of their freshman or sophomore year. In their fourth year, participants matriculate at UMass Law as first-year law students, and they earn credit toward completion of the undergraduate degree by completing their first-year law courses.

This accreditation involves a police agency formally evaluating its activities, policies and procedures to determine compliance with defined program standards set by MPAC. It adopts its standards from the National Commission on Accreditation for Law Enforcement Agencies, which was established in 1979. Accreditation is a rigorous two-step process and is similar to other accreditation processes that encompass Massachusetts and federal regulations.

“This has been a goal of mine to do the accreditation process since becoming chief,” QCC Campus Police Chief Kevin Ritacco said. “Our Deputy Chief Reynaldo Rodriguez, said ‘We can do this,’ and became our accreditation manager. He helped us reach our goal and deserves a lot of credit. This has given us better communication, better reports, more programs, an honor guard, and most especially, full transparency of our policies and procedures.”

Anita Mattson, associate professor of chemistry and biochemistry at Worcester Polytechnic Institute, has received a $1.7 million award from the National Institutes of Health to develop a new class of catalysts that could make it possible to reliably synthesize organic compounds that hold the promise of treating cancers that have become resistant to commonly used chemotherapy medications.

The catalysts may also open the door to a new approach to discovering new drugs for cancer and many other diseases.

Mattson’s grant from the NIH, known as an R35, is a relatively new award reserved specifically for early-stage investigators whose research shows exceptional promise. The agency says the awards are designed “to provide long-term support to an experienced investigator with an outstanding record of research productivity. This support is intended to encourage investigators to embark on long-term projects of unusual potential.”

Drug resistance is a common and intractable problem in chemotherapy. Too often, cancers that at first respond well to commonly used treatments suddenly begin to grow again. The problem is often complicated by deficiencies that inhibit the body’s own anti-cancer immune response.

In her research, Mattson is focusing on a group of naturally occurring molecules known as dimeric chromanones. Derived from various strains of fungi, chromanones have high biological activity, which makes them attractive targets for drug discovery. Some, like cisplatin, appear able to induce apoptosis in cancer cells; some also seem to stimulate the cancer immune response. Because of these properties, Mattson says chromanones could become powerful dual-action treatments for drug-resistant cancers.

Read the entire story on PRWeb.com

Clark University has earned an overall grade of “A” in the 2018 edition of Niche’s Best Colleges In America, and received stellar marks in several categories from academics, to value, to campus dining and housing.

Clark received an “A+” for professors, an “A” for both diversity and academics, and an “A-“ for value. Clark is No. 4 on Niche’s list of Most Liberal Colleges in Massachusetts and No. 7 on the list for Best College Food in Massachusetts.

“Clark’s pioneering education model, LEEP [Liberal Education and Effective Practice], combines rigorous academics with world and workplace experiences so our students can be imaginative and contributing citizens, advance the frontiers of knowledge and understanding, and shape a life and career on their own terms. A Clark student regards the status quo and says, ‘I can do better,’ ” the Clark profile reads.

Anna Maria was ranked 14th in the list of Best College Food in Massachusetts.

Niche is a Pittsburgh-based website that “rigorously analyzes dozens of public data sets and millions of reviews to produce comprehensive rankings, report cards, and profiles for every K-12 school, college, and neighborhood” in the United States.

Read the entire story on the Clark University website. See the entire rankings on the Niche website