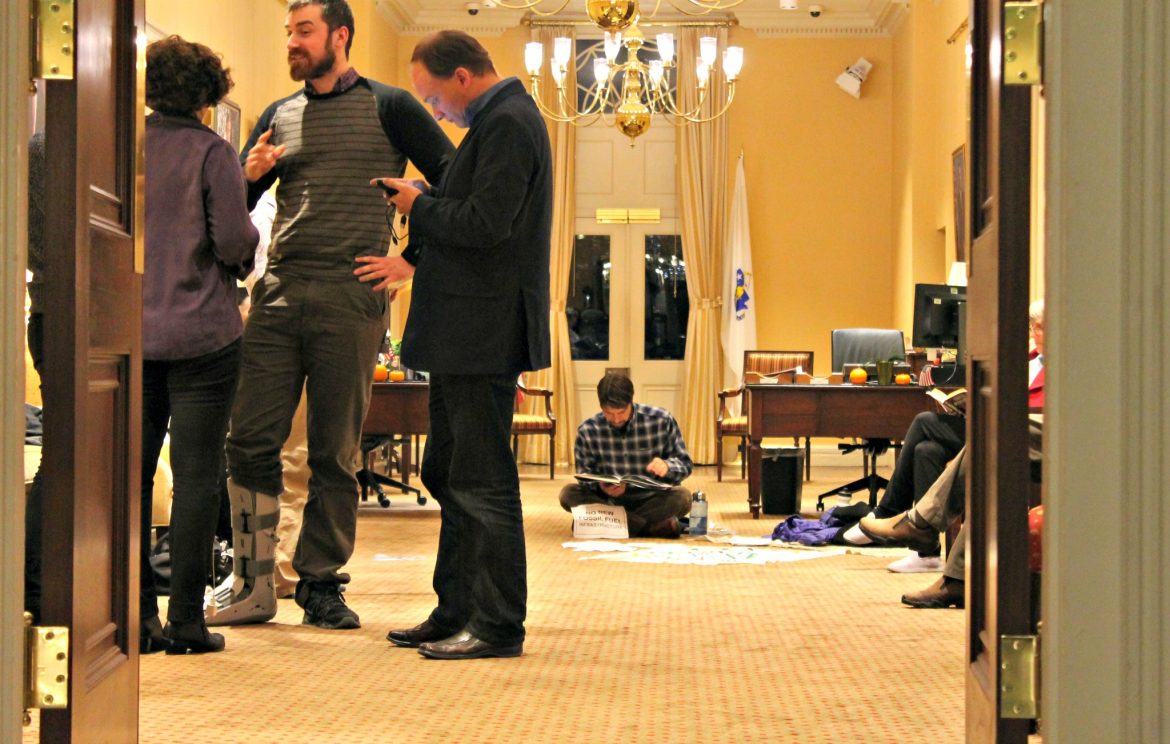 Climate change activists waited for Gov. Charlie Baker's office to close on Wednesday evening (Nov. 8) during a sit-in to demand Baker sign an executive order discouraging new fossil fuel infrastructure. Baker responded on Thursday, defending his record on clean energy and saying "we shouldn't be painting ourselves into a corner, especially in a sector like this where the changes are coming fast and furious."

Six climate change activists were charged with trespassing on state property and unlawful assembly last week after refusing to leave Gov. Charlie Baker’s office lobby. On Thursday, activists plan to return to the Corner Office with 150 supporters, including several who appear ready to be arrested.

Activists associated with 350 Mass Action, the Toxics Action Center and Unitarian Universalist Mass Action want Baker to sign an executive order banning new fossil fuel infrastructure projects. Baker has said he does not want to take any options off the table as he navigates the state’s energy landscape.

On Tuesday, Craig Altemose of the Better Future Project circulated a media advisory stating that 20 people plan to launch a sit-in in Baker’s office lobby early Thursday afternoon and the sit-in is expected to last “until building closes at 6 p.m., and participants are charged with trespassing.”

Organizers say ministers, doctors, and scientist plan to protest “in their professional attire.”

Activists last week spent considerable time photographing each other while protesting and on Tuesday made their bid for media attention clear, pledging to deliver visuals on Thursday of “police and sitters facing off,” “people singing,” and “doctors/scientists in lab coats.”

Congressman Stephen Lynch on Monday unveiled legislation that, if passed, would suspend construction and expansion of natural gas facilities in communities with unsafe air pollutant levels.

“This is not complicated: if the air quality in a community already violates federal Clean Air Act standards, we should not be adding toxins to the air in that community,” Lynch said.