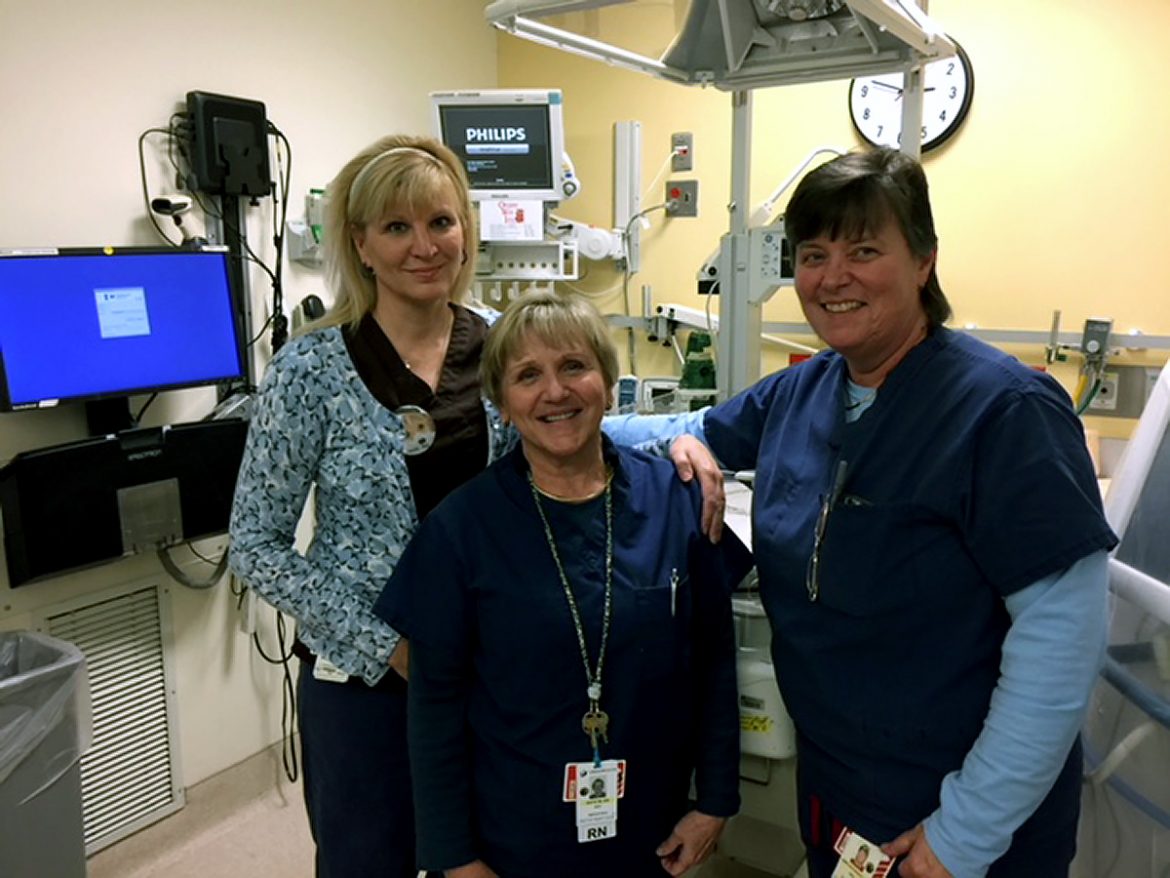 Nurses, from left, Janet Scanlon, Patti Wright and Anne Castonguay in the NICU.

They stand watch like guardian angels protecting and caring for infants so small and so vulnerable that it’s hard to imagine that, one day, these tiny spirits will most likely grow into chubby-cheeked little babies.

While nervous moms and dads hold their new child in their arms, some so small that they are measured in grams and not pounds, the parents of these little miracles look to the nurses in the Neonatal Intensive Care Unit (NICU) to fight to save their precious child’s future.

And more often than not, with the help of a staff of talented doctors, modern technology and the grace of God, they succeed.

Patti Wright has spent all of her 43-plus years as a nurse at the NICU (pronounced nick-u) at UMass Memorial Medical Center — Memorial Campus. She started the year the unit opened in 1974. Fresh out of nursing school, Patti said that she “had no idea what she was getting into.”

Prior to starting, she received no specialized training – nobody did. “Everybody was learning together,” she remembers. “I was scared to death. Back then, this was a new science.”

Memories of her first years are still with Patti. She remembers a preemie named Wendy who had blue eyes and light hair – although the hair color was hard to determine because in those days the infants’ heads were shaved for IV therapy. Wendy was her first tracheotomy patient.

“I would wake up in the middle of the night frightened, saying, “Someone put the lights on, her trach fell out and I can’t see to reinsert it,’ ” she recalled. Sadly, Wendy’s tiny lungs were so bad that the hospital staff could not save her.

Patti also remembers her first gastroschisis patient, a little girl named Angela who was born with her intestines outside of her body. In those days, the treatment was to hang the bowels in a bag above the infant and slowly push them back into the abdominal cavity. The entire process took a week. Happily, Angela would be okay.

And that is the joy of the job, says Patti. “We like to say that we are saving the child for a lifetime, giving that baby a chance at 60-70-80 years of life.”

When the unit first opened, the technology, medicine and treatments were very different than they are today. Back then, children born to mothers who had carried them for less than 30 weeks rarely survived. Today, a preterm infant as young as 23 weeks can survive – children so tiny that their diapers measure only about two to three inches wide.

According to Dr. Lawrence Rhein, division chief of Neonatology at UMass Medical School, “A 1-kg [2.2-pound] infant who was born in 1960 had a mortality risk of 95 percent but had a 95 percent probability of survival by 2000.”

Dr. Rhein says proudly, “We have some of the best survival rates and outcomes in the entire country. We have a world-class neonatal unit.”
He credits the staff for the unit’s success.

Children who come to the NICU may have respiratory distress syndrome, cardiac or bowel defects, various syndromes or chromosomal abnormalities. Many are born prematurely, with some weighing less than a pound. Some also come addicted to drugs. Those addicted face considerable suffering.

Anne Castonguay started in the NICU fresh out of nursing school just over 30 years ago. She often serves as a “primary,” a nurse who stays with a child throughout his or her hospitalization. Castonguay has stayed as long as eight or nine months with a baby while they work to send him or her home.

She said that one of the best parts of the job is when a parent comes back to the NICU “with a big, fat baby who has been thriving at home. I’m blessed to be able to do what I do.”

But Castonguay has also known the other side of the job, when the outcome was not so positive. She has watched new parents of twins celebrate the life-saving care given to a newborn while, at the same time, mourning the loss of their other child. Even with all the emotion that comes with the job, she says she “couldn’t imagine doing anything else.”

Erin Wright is not related to Patti. But she and her husband, Dan, called her “Nana Wright” as Patti cared for their daughter, Abigail. Known as “Little Miss Ladybug” when she was on a ventilator in the NICU, Abby is now an “incredibly healthy” 8-year-old who enjoys playing soccer.

But it wasn’t always that way. Abby was born prematurely at 25 weeks, weighing only one pound, 5 ounces. She needed four months in the NICU before she could be sent home.

“As parents, we were so shocked and scared,” Erin recalled. “We didn’t know how something this small could survive.”

Erin was quick to point out that the nurses of the NICU not only took care of Abby, they also took care of the parents. “All of the nurses were extremely caring and so informative,” she said. “They always took the time to explain the expectations for the day, for the week.”

“They were always so positive and confident. Their confidence made us feel so comfortable,” she said.

After a year as a nurse at a children’s hospital in Texas, Janet Scanlon came to Worcester and the NICU in 1988. She has been there ever since.

Janet has a lasting memory of triplets who were born when she was a young nurse. Born at 23 weeks, only one survived and he was blind. She was there in the delivery room when the triplets were born. She cared for them in the NICU and then when the one child was sent home, she cared for him there.

Each year on April 17, Janet has called her former charge – for the past 25 years. Today, that accomplished young man has graduated from college, been accepted into law school, climbed Machu Picchu in Peru, skis, surfs and testified successfully before Congress to secure funding for programs that support the blind. When she talks about him, you can see the pride in her face. 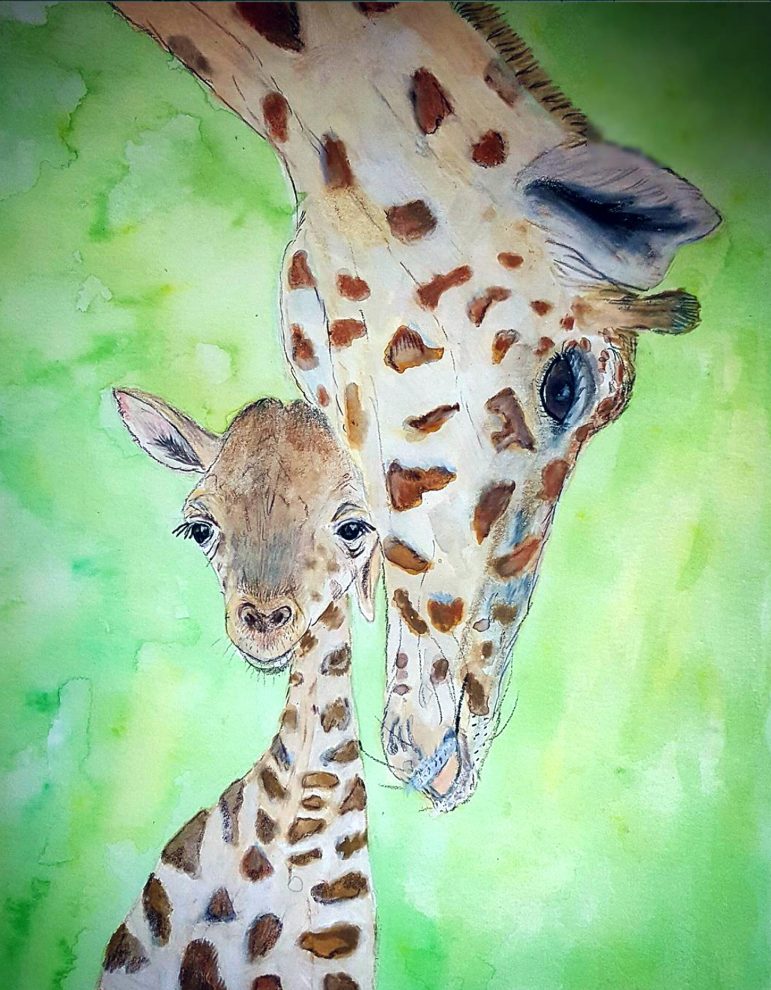 Along with being an accomplished nurse, Janet has another distinct talent. She is an accomplished artist. Self-taught, she creates original watercolor art for the families. Most of her art depicts animals, often a baby with its mother.

One of the most poignant pieces she made into a card to give to a young mother who had lost her baby. It is a picture of a mother giraffe nuzzling her young calf.

The hospital has used Janet’s art to help make a guide for parents whose child was born addicted to drugs. The loving images she has created soften the guidance of a very difficult subject.

In addition to providing professional care for the infants, the nurses at the NICU do whatever it takes to provide a family-friendly atmosphere. Janet hand-paints unit walls with holiday themes for Christmas, Easter, Halloween and other occasions.

Nurses make Christmas cards for parents, complete with handprints or footprints from their tiny child. And every child, even the tiniest, gets a picture with Mr. and Mrs. Santa Claus.

In the most frightening moments in a parent’s life, the nurses try to bring a sense of normalcy and hope to the new family.

For all of the nurses in the NICU, the greatest joy comes from sending the little ones home – and then to see a few of them as they grow. Some come back with their parents to say hello. Other parents who recognize the nurses outside of the hospital stop to say hello and to introduce them to the young child who was once in their care.

As you enter the NICU in the hospital on Belmont Street, there are huge poster boards with hundreds of pictures of healthy little babies, young children and some older children. All of them were once watched over, protected and cared for by these guardian angels – nurses who fought valiantly to help create a small miracle.

The children behind these pictures and thousands of others are why these nurses stand guard.

Raymond V. Mariano is a Worcester Sun columnist. He comments on his hometown and global issues that impact it every Sunday in Worcester Sun. His column appears weekly in the Sun’s print edition, on newsstands Saturdays.