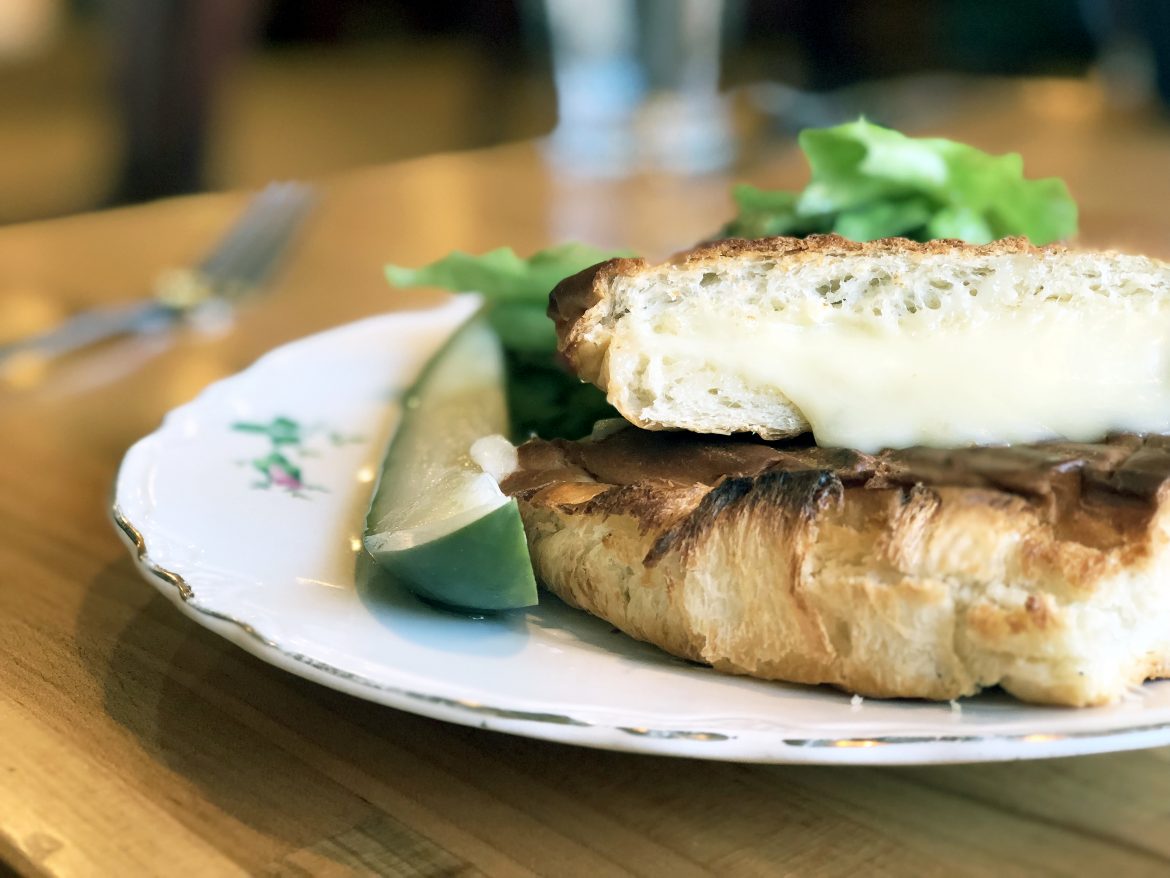 With a blend of cheeses, and especially freshly made bread from BirchTree Bread Co., Kummerspeck’s take on grilled cheese is not to be missed.

With the holidays comes the joy of overeating, a sudden lack of portion control, and food lovers thinking about the new year and starting a new diet.

Comfort foods become cravings in the months of November and December, and hearty meals tend to lead us right into sleeping bliss. For someone like me, the holidays are pure heaven.

Recently, that nostalgic, emotional eating style has been captured by the menu offered at Kummerspeck.

Kummerspeck’s menu is tailored to satisfy even the smallest dose of emotional dining. The Canal District business’s atmosphere brings about a sense of home and allows diners to settle in to its eclectic mix of comfort foods that pay homage to European dishes with a twist of American classics.

With a heavy focus on locally sourced ingredients, Kummerspeck flexes its creative muscles in the kitchen by providing new dishes every day, and keeping the menu fresh and engaging for its patrons.

While the ravishing reviews of Kummerspeck speak to its formidable dining menu, it is the daytime atmosphere that truly shows the place’s style and tone. Kummerspeck is a cross between a butcher shop, delicatessen and restaurant – an enticing combination for customers. 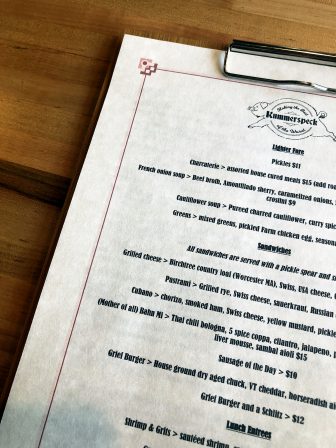 From its lighter offerings like the charcuterie, an assorted plate of house-cured meats; and the French onion soup, beef broth infused with Amontillado sherry, caramelized onions, Swiss cheese and BirchTree crostini; to its lunch entrees of shrimp and grits, creamy and topped with sautéed shrimp, Tasso ham and spicy sofrito; and cottage pie, potato-filled with beef shank, peas, turnip, and infused with red wine, Kummerspeck’s lunch menu is truly a gem.

I prefer the sausage of the day, and am highly partial to the Italian spicy sausage being the daily pick, since it is less commonly available in the city. There is enough meat here to feed a small village, but the sausage calls to me. Part of my Brooklyn childhood is awakened as soon as I push through the deli doors.

The sausage of the day is a great starter. It is simplistic in structure yet packed with a flavorful punch.

“The sausage is great. They’re hearty and we serve them with a light side of greens and a pickle,” said Adam Sheldon, Kummerspeck’s general manager and beverage director. “It’s never a hit or miss. I have my share of favorite sausages, and Italian sausage is not my number one pick, but Matt has a special way of bringing out the flavors to convince me otherwise.” 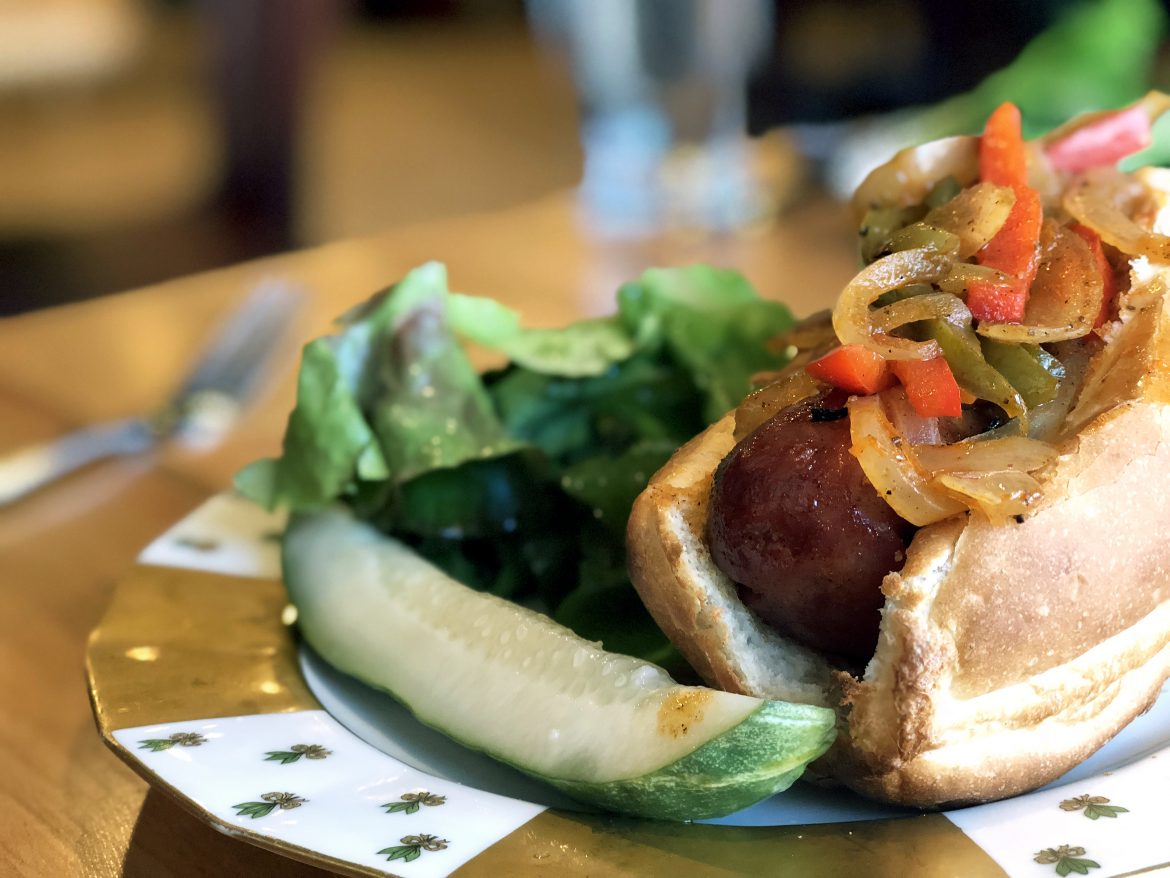 Adam was referring to Matt Mahoney, the co-executive chef of Kummerspeck. While Mahoney floats around the butcher block and the deli side of the business, his presence is felt at the table through the powerful flavors and balanced traits of his meals.

Part of the fun at Kummerspeck is watching the meats be carefully selected at the deli, then brought back to the kitchen to be prepared and finally placed in front of you at the table. Not many other delis emphasize the curated process by which the daily specials are crafted. That passion is evident, and well-received, on the dinner plate.

I’m sure that if I were to bring along a Brooklyn deli owner on my next visit, they would give the ultimate nod of approval to Kummerspeck’s curated meats.

In keeping with my emotional-eating theme, ordering the grilled cheese was an easy followup choice. Nothing says nostalgia like grilled cheese on a chilly afternoon, and Kummerspeck’s adult version of grilled cheese deeply satisfies. Served on a BirchTree country loaf, the Swiss, Cabot clothbound cheddar and American cheeses are melted into a thick spread of palatable richness.

The debate over how to prepare the ultimate grilled cheese is one for the ages. With the newer artisanal-style grilled cheese sandwiches filled with tomatoes and basil, or hipster-style mixing goat cheese, fig paste and arugula (a favorite of mine from the local Say Cheese food truck), the debate is hard to settle.

But Kummerspeck’s simpler take on the iconic sandwich is the closest thing to perfection. The BirchTree country loaf is top-notch, crunchy, and grazed with grill marks, and works delightfully with the cheese combo.

Its open-concept layout showcasing the different elements of its offerings, its welcoming service and its knack for satisfying cravings (and creating new ones) have helped Kummerspeck carve out a niche in the growing food scene of Central Massachusetts.