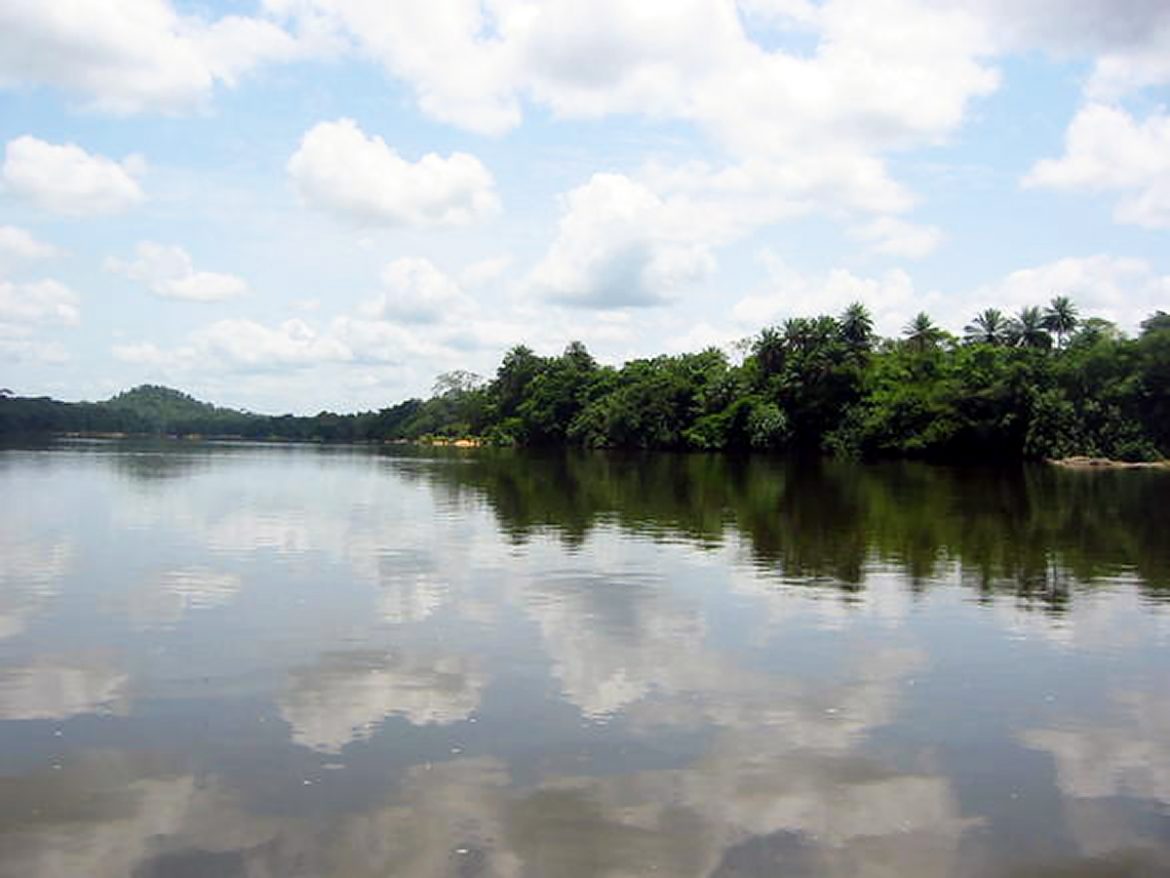 Tiwai Island juts out into the Moa River near Daru, Sierra Leone. It was on the banks of the crocodile-infested river that Augustine thought he discovered his long-lost brother’s true intentions for him.

I went to see my brother at the Daru army barracks and searched for his office.

He worked in the Officers Mess. I had always thought of him being an officer because he had long served in the Sierra Leone military. I was only 3 years old when he took up the job in 1967. He became a boxer and a good salesperson at the Officers Mess. He knew all the officers there. But he did not worry about his own position.

That morning he had no money, but he wanted me to cook for him before he got home. He wrote a note for me to take to his friend, a shopkeeper, who would give me some money to buy food. But how did he know that I could cook? Anyway, my grandmother had taught me to cook when she became very busy, so I was not bad at it. Besides, I was quite hungry by now.

I had to walk a good distance across the Moa Bridge to return home and give the letter to his friend. Realizing the request was from Duran, the shopkeeper quickly declined, and said to tell him Juldeh was not around. But that was him.

I kept quiet. I did not return to him nor did I let him know the outcome of his letter. My brother had hoped to meet good food at home and have some money left over for him to play Bingo.

I had been given some food by Mrs. Lahai, the wife of one of our neighbors. She had lots of children around, including her brothers Ballah and Kanu. They were my age, so we were fast friends. I was in a different situation right then. My story had changed. Three weeks had gone by, and my brother had not mentioned anything about my school or returning to Motema to continue my studies. It looked as though I was to wait out the year in nothingness.

I would virtually cry aloud for the waste of time. It seemed I was going to die in a desert without school. My labor increased. I had to do it all myself because Duran proved that he was not there to help me, but rather to use me. He clearly did not have what I needed. But I had no way out. I reflected on the previous escape I had made to go see my grandmother. The people around my brother were displeased that I could not return to school until June 1977.

Daru looked like a village but also a town, because for the surrounding villages Daru was the center around which life revolved. I could not play soccer because the boys there were only occupied with farming activities and school.

I was always confused staying home alone to cook and clean the house. This was like a job for me. I was also responsible for washing my brother’s combat uniform, which he wore all the time. The uniform was heavy and hard to handle. This was certainly a tough time for a lazy boy like me. He would flog me very well if I made any mistake with his combat uniform. I would shine his boots until he could see his face on the shoe toes.

My brother did not think about my education. His thoughts were on getting another wife. His first wife was quite dissatisfied with his behavior. They had two kids. She returned with them to her home in Kono and never came back to him in Daru. She was a loving person but could not bear his gambling.

Duran had been talking about a woman he was going to marry but who lived on Bonthe Island, a part of Sierra Leone in the sea where slaves were picked up in the past. He saved some money for that. He talked extensively about how he would travel to Bonthe Island, and how he would swim if the ferry broke down or boat capsized. I enjoyed his confidence. He practiced what he was going to say to the family and exaggerated the beauty of the lady. I admired him then.

However, he was only distracting himself from my school fees. He kept telling bogus stories. We were in the second month. I did not go to school. I was ashamed. When people talked about my returning to school, or when my brother was asked if I was going to attend in Daru, he blamed it on him not having a wife.

One day I went to the bush to fetch firewood. It was a March afternoon, when the heat could be around 100 degrees or more. I searched for two other friends to go with me for the firewood. I was excited, but the thought of big snakes being in the bush and waiting for prey to devour was powerful. I told myself I would not enter the bush, but would look for dry sticks on the side of the road.

Ballah and Kanu joined me from their house. I was fond of them already after seven months together. As we proceeded further into the bush, I was fortunate to see a farm away from the road. I thought we could get some dried firewood there. I walked toward a big tree with a very big shade to relax under. Looking toward the farm to the south, I saw a heavy deer walking with a limp. It came toward us and walked slowly.

I held the cutlass tight. We had only one cutlass. I took a rock and threw it at the deer. It was very tired. It had been trapped earlier on and found it difficult to walk on the muddy ground. That was a real problem for the deer. Its friends had all left it behind. I advanced on the animal, not knowing it could hit with its hind legs. I lashed the cutlass across its stomach, anticipating it would split open and we could easily slaughter the deer and share it.

The old man did not waste time. I let go of the hind legs and the deer was finally dead. We all managed to drag the animal away to the farmhouse in the middle of the farm. The old man shared the meat. I got a better share than the other two boys who had only stood watching. They grumbled but could do nothing.

I arrived home. Duran, my brother, was not in. I could not say anything. He had stayed at work waiting for me to go to his workplace and leave with him after I fetched the firewood. The deer encounter did not allow us to look for firewood. I went to meet him at work, a very far distance, too. I was tired and weak. “Why do you look lazy and tired like someone who has not eaten for days?” Duran asked.

He forced me to talk. I muttered, “I want to go home to Motema and return to school.” I was forced to say it louder, which I did. He answered, saying, “When I bring my wife then I will help you to return home to Motema.” I cried out loud and he slapped me to keep me quiet. I now knew I would not return to school for that year.

We walked home slowly. He told me his endless story as to how his wife will make a difference in his life. He said her coming would mean a change of life for him. “Augustine will not cook anymore. He will not wash my clothes. You will relax,” he said.

Close to the house he asked whether I got the firewood. I did not answer because he would have swept me off my feet with another slap. I later said yes. He was not pleased with my delayed answer. When we arrived home, I had to clean the kerosene lamp, since there was no electricity in our house. I did that quickly and lit it bright. He saw a strange bowl full of meat. He was excited. I told him the reason why I could not get firewood. He was happy because he loved meat.

He set up the stove to make soup for us that night. He said I was a soldier in the making, that he loves brave boys like me. He had to take some to his workplace to save in their fridge. He told his friends that I killed a deer, which he put in the fridge. That was a special meat he was saving for the arrival of his wife. I thought the wife’s coming was close. He lived in fantasy.

The next day, he asked me to go to the River Moa to wash his clothes. I had barely any clothes to wear. I managed the shirt and short pants I came with.

No one went to wash clothes at River Moa. It was very dark water with rocks by the edge. It was like a crocodile pond. The water flowed well, but it had no speed. One could see crocodiles moving around in some areas looking for something to eat. Well, I never knew the edge was their place to catch their prey easily. I started shaking the water as I washed the blanket. I looked up and saw the water moving toward me. It was a crocodile — looking for me.

I threw the blanket toward it and I jumped out of the water toward the shore. The blanket had covered the crocodile’s view. I was gone while the crocodile fought in the blanket. It found nothing there to eat.

I left all the clothes there and came home in tears. I could not sleep. My brother told me it was a bad day, but the crocodiles never track human beings. He said that I should not fear but try again another time. I believed then that he did not love me but wanted to see me die.