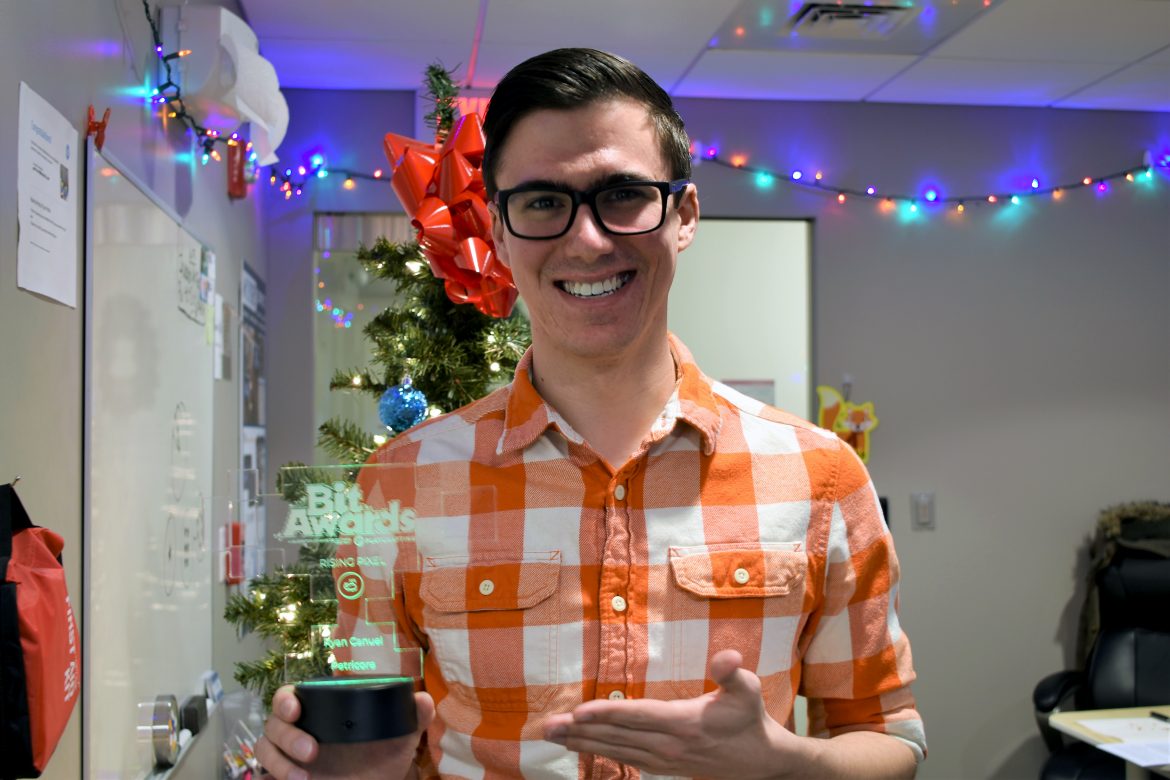 Ryan Canuel, owner and director of the downtown tech startup Petricore Games, was honored with a Rising Pixel Award at a recent industry conference in New York.

The American Council of Graduate Medical Education has awarded a Back to Bedside grant to UMass Medical School alumni and internal medicine/pediatrics residents Emily Chen, M.D., and Emily Levoy, M.D.

The Back to Bedside program supports resident- and fellow-led projects that affect the way they engage with patients and their learning environment in powerful and meaningful ways. Drs. Chen and Levoy will use the one-year, $2,000 grant to implement their “Mindful Rounding: A Back to Bedside Initiative.” The grant is renewable for up to two years.

“The majority of residents enter the medical field because we enjoy interacting with and helping patients, but many of us have found that we devote too much time to administrative tasks and documentation,” Levoy said. “The Back to Bedside grant was a great opportunity to think critically about how we could create an intervention to improve the quantity and quality of the interactions we have with patients and families on a busy inpatient pediatrics ward.”

Mindful communication in medicine is the concept of bringing intention, attention and reflection to clinical practice. It has shown promise as a way to combat physician burnout. Their model, if successful, would be an additional tool for the care team to use with both patients and staff, increasing interprofessional collaboration.

Levoy and Chen will conduct a training workshop on mindful communication followed by incorporating daily mindfulness activity. Mindful rounds will be structured to begin with a brief meditation, and the care team will set an intention before each new patient is presented to encourage team members to stay present throughout the encounter. They will survey participating residents, hospitalist attending physicians and pediatric nurses to determine if the intervention improves the perception of quality of time with patients.

“We hope that our project will create opportunities for residents, faculty and nurses in the pediatrics department to learn and experience mindfulness and mindful communication in medicine, and simultaneously improve patient and family satisfaction with the care they receive at our institution,” Chen said. “We hope that teaching mindful communication skills and reinforcing them with frequent recentering exercises will bring meaning back into patient interactions, reconnecting us with why we got into medicine in the first place.”

Chen and Levoy would eventually like to expand the mindfulness rounding intervention to other departments at UMass Memorial hospitals. “We are hoping our project will allow our patients to feel heard and understand, creating connections that can be healing in themselves, for both patients and providers,” they concluded.

Ryan Canuel, a Becker alumnus and founder and CEO of Worcester-based startup Petricore Games, received the 2017 Rising Pixel Award during the annual Bit Awards in New York City. The Bit Awards, held Dec. 15, celebrate the year in games and the people behind them. Each year, a rising game developer who is making an impact on the community and the industry is honored with the Rising Pixel Award.

“It was really an unexpected honor to receive this award. I was there because our game, ‘Battery Boy,’ had been nominated for Mobile Game of the Year, but never expected I’d receive the Rising Pixel award for Boston,” said Canuel, a 2015 Becker grad. “Thank you to the people who nominated me, and to my amazing team, mentors, and friends who got together and made a video for the reception.”

Canuel and his Petricore Games team, consisting of fellow Becker alumni — Christina Andriano ’15, Oliver Awat ’15, Chris Bruno ’15 and James Spavold ’15 — are no strangers to earning honors. In 2016, Canuel was named Entrepreneur of the Year by the Worcester Regional Chamber of Commerce. A year earlier his company earned a spot in the Startup Worcester inaugural cohort and a place in the MassDiGI Game Challenge finals. Over that time, Petricore has launched two well-received mobile games, “Mind the Arrow” and “Gelato Flicker,” and worked on a number of interactive projects for cultural organizations and nonprofits across the country and around the world.

“This is well-deserved recognition for Ryan’s and Petricore’s work, and is reflective of the education Becker College provides, which promotes innovation and creativity,” said Nancy P. Crimmin, president of Becker College. “This award also reflects well on our top-rated game design program, which for years has been producing skilled entrepreneurs capable of competing and succeeding in this ever-changing industry.”

Canuel and Petricore have remained close to Becker since graduating, hiring many students as interns. In addition, the company has taken a lead role in supporting the Central Massachusetts game development community through its sponsorship of the Worcester Game Pile, a local meetup group.

“I congratulate Ryan Canuel on earning this award. He and the Petricore team are a prime example of our recruit-retain-incubate strategy,” said Timothy P. Murray, president and CEO of the Worcester Regional Chamber of Commerce. “From their time as students at Becker through their decision to stay in Worcester after graduation to where they are today, they’ve made a tremendous impact on the industry and local economy, and are worthy of this recognition.”

Becker College has been called “a destination for game designers” by U.S. News and World Report. Becker College, home of the Massachusetts Digital Games Institute (MassDiGI), has been consistently ranked by The Princeton Review for the past six years as a top undergraduate school to study game design.

Becker College’s School of Nursing and Behavioral Sciences awarded pins to the latest graduates of its associate of science degree in nursing program.

The pinning ceremony,  held Dec. 14,  is a time-honored nursing school tradition. Often more personally meaningful than the graduation ceremony, it signifies one’s official initiation into the brotherhood and sisterhood of nurses.

The ceremony is rich with symbolism. The history of this rite of passage can be traced to the Crusades of the 12th century. During this time, the Knights of the Order of the Hospital of St. John the Baptist tended to injured and infirm Crusaders. When new monks were initiated into the order, they vowed to serve these sick soldiers in a ceremony in which each monk was given a Maltese cross, the first badges given to those who nurse.

The College of the Holy Cross has named Bob Chesney its new head football coach. Chesney stepped down as head coach at Assumption in mid-December to take the role at HC.

Chesney, who becomes the 28th head coach in the history of HC’s football program, has posted a winning record in each of his eight seasons as a collegiate head coach. A two-time Northeast-10 Conference Coach of the Year, his career record stands at 67-25 (.728 winning percentage), including five seasons at Assumption College (44-16, 2013-2017) and three years at Salve Regina University (23-9, 2010-2012).

“I would like to thank everyone at Assumption College for their belief and support in our program over the past five years. The players, coaches, administrators, families and local community have helped to build an extremely successful program that will endure for years to come,” Chesney said in a statement from HC. “When presented with this opportunity at Holy Cross, I quickly realized how passionate those connected to the College truly are. The commitment to athletics and the vision for future success is evident, and I am proud to be part of it.

Chesney earned his bachelor’s degree from Dickinson College in Carlisle, Pa., in 2000. He lives in Worcester with his wife, Andrea, their daughters, Lyla and Hudson, and their son, Robert.