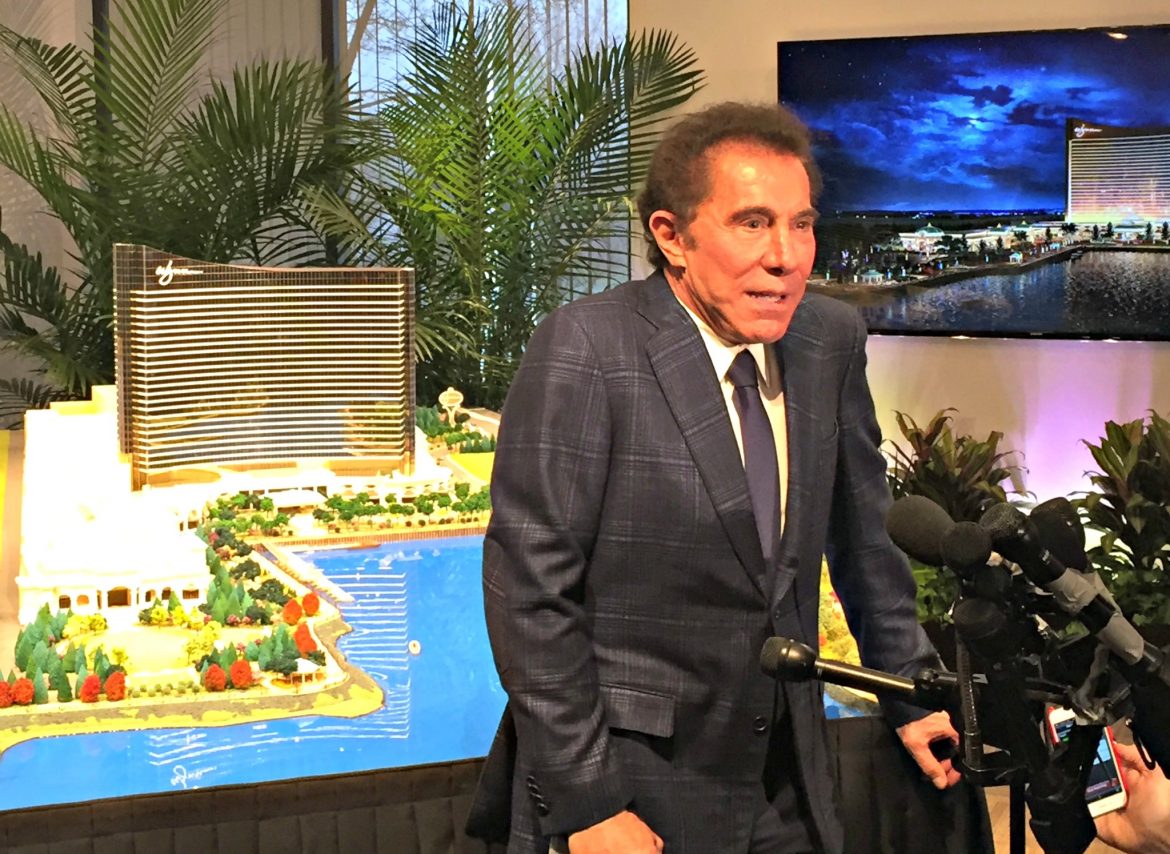 Casino owner Stephen Wynn spoke to the media at a Wynn Boston Harbor unveiling event in 2016.

Gov. Charlie Baker said that if the allegations of sexual misconduct by casino employees against Steve Wynn are true then the developer would be unsuitable to hold a casino license in Massachusetts, but his condemnation came with one major caveat.

“I’m not the decision maker,” the governor said.

Baker, a Republican, addressed the allegations against Wynn during his monthly “Ask the Governor” segment on WGBH and again later with a group of reporters after a meeting with legislative leaders. The Massachusetts Gaming Commission launched an investigation following a Jan. 26 Wall Street Journal report on what the newspaper called “a decades-long pattern of sexual misconduct” by Wynn, including instances of pressuring employees to perform sex acts.

While the commission did not lay out a timeline or process for its review, a meeting has been called for Wednesday to discuss the allegations against Wynn and the commission’s Investigations and Enforcement Bureau plans to provide commissioners with a “status update” on its efforts, according to a spokeswoman.

“The Commission is profoundly aware of the gravity of this matter and will proceed with the appropriate sense of urgency and rigor,” spokeswoman Elaine Driscoll said Monday.

Wynn, who is building a $2.4 billion resort casino in Everett, issued a statement to the paper calling assault claims “preposterous” and motivated by his ex-wife as part of an ongoing divorce lawsuit, but over the weekend he did step down as finance chair of the Republican National Committee.

Baker reached out to the Massachusetts Gaming Commission on Friday, he said on Monday, and conveyed to the commission that he wanted the situation to be reviewed in light of the suitability clause for licensees included in the state’s expanded gaming law.

“They were set up as an independent entity for a reason and we should give them the ability to perform their independent duty, but the allegations are serious. They should be taken seriously, and my hope is that they can move very quickly to reach a conclusion with respect to whether or not it meets the suitability test,” Baker said.

Pressed by host Jim Braude over whether Baker personally thought Wynn would be suitable to hold a casino license if the allegations against him are true, Baker said, “No. God, no.”

The governor’s campaign also reached out to the Republican Governors Association over the weekend asking it to return all recent donations from Wynn Resorts and to stop soliciting money from Wynn and his company, according to a senior campaign aide. Baker told reporters Monday afternoon that he felt it necessary to contact the RGA, which was a major funder of both his campaigns for governor, because, “I felt the allegations were appalling.”

RGA spokesman Jon Thompson said the group would return a $100,000 donation made by Wynn Resorts in September, and had cancelled its contract to host its 2020 annual conference at Wynn Las Vegas, absorbing the financial penalty. Thompson also said the RGA would no longer accept or solicit funds from Wynn or Wynn Resorts unless the allegations are proven false, but the organization said it could not return any of the $2.5 million received from Wynn Resorts over the past 18 years because the money already had been spent in past election cycles.

Meanwhile, two Democratic candidates for governor had already made up their mind about Wynn on Monday, calling for Massachusetts gaming regulators to cut ties with the casino magnate over the reports of sexual misconduct, harassment and assault.

Democrat Jay Gonzalez said the commission should revoke Wynn’s license unless he is “disassociated in all ways” from the company authorized to build and operate the casino. And former Newton Mayor Setti Warren said if the RNC can’t work with him anymore, Massachusetts shouldn’t either.

The commission on Friday issued a statement that said its Investigations and Enforcement Bureau “will conduct a regulatory review of this matter to determine the appropriate next steps.”

“The Commission is now aware of and is taking very seriously the troubling allegations detailed in the Wall Street Journal article. The suitability and integrity of our gaming licensees is of the utmost importance, and ensuring that suitability is an active and ongoing process,” commission spokeswoman Driscoll said in a statement.

The state’s casino gaming law requires the Gaming Commission to consider the “integrity, honesty, good character and reputation” of all licensees and their major executives, directors and shareholders.

The law also states that the commission shall deny a license to an applicant who has “committed prior acts which have not been prosecuted or in which the applicant was not convicted but form a pattern of misconduct that makes the applicant unsuitable for a license under this chapter,” and can revoke a license from someone if they fail to maintain those standards of suitability.

“Steve Wynn is probably the most well-known gaming executive in the country, if not world. His name has become synonymous with casino. Reams of print and may hours of audio and video have addressed this charismatic figure. Because of Steve Wynn’s notoriety, one can find many reports raising questions about his background. The IEB’s investigation reviewed those reports and found that none of them raised any issues that prevented a recommendation of Steve Wynn’s suitability,” the commission wrote in its suitability review.

House Speaker Robert DeLeo, who played a major role in writing the 2011 gaming law, said it should be clear by the statute that the Gaming Commission has the authority to make a judgement on whether an applicant has the character to operate a casino in Massachusetts, and he said he does not think it should matter that the license has already been issued.

Gonzalez said Wynn’s reputation “absolutely and unequivocally disqualifies him from operating a casino.” The Gaming Commission previously found nothing in Wynn’s past that would disqualify him from holding a license, and said his name was “synonymous with gaming.”

“In light of the horrific stories of sexual assault and misconduct being told by many women who worked for Steve Wynn, the Massachusetts Gaming Commission should take immediate action to ensure that Wynn divests and disassociates himself from the casino being built in Everett,” Gonzalez said in a statement.

Warren, also a Democrat, said it’s “clear that Steve Wynn is not a good partner for Massachusetts.” “If I were governor right now, I would work to ensure that Steve Wynn lost his operational control and ownership interest in Wynn Resorts,” Warren said.

Baker said the Gaming Commission needed “to determine what the facts are,” but suggested if there is a concern about moving forward with the Everett casino then the commission should reach out to the board of directors of Wynn Resorts, which he noted is a publicly traded company.

“I think at that point it’s going to be up to Wynn Resorts to decide what they want to do about it,” Baker said.