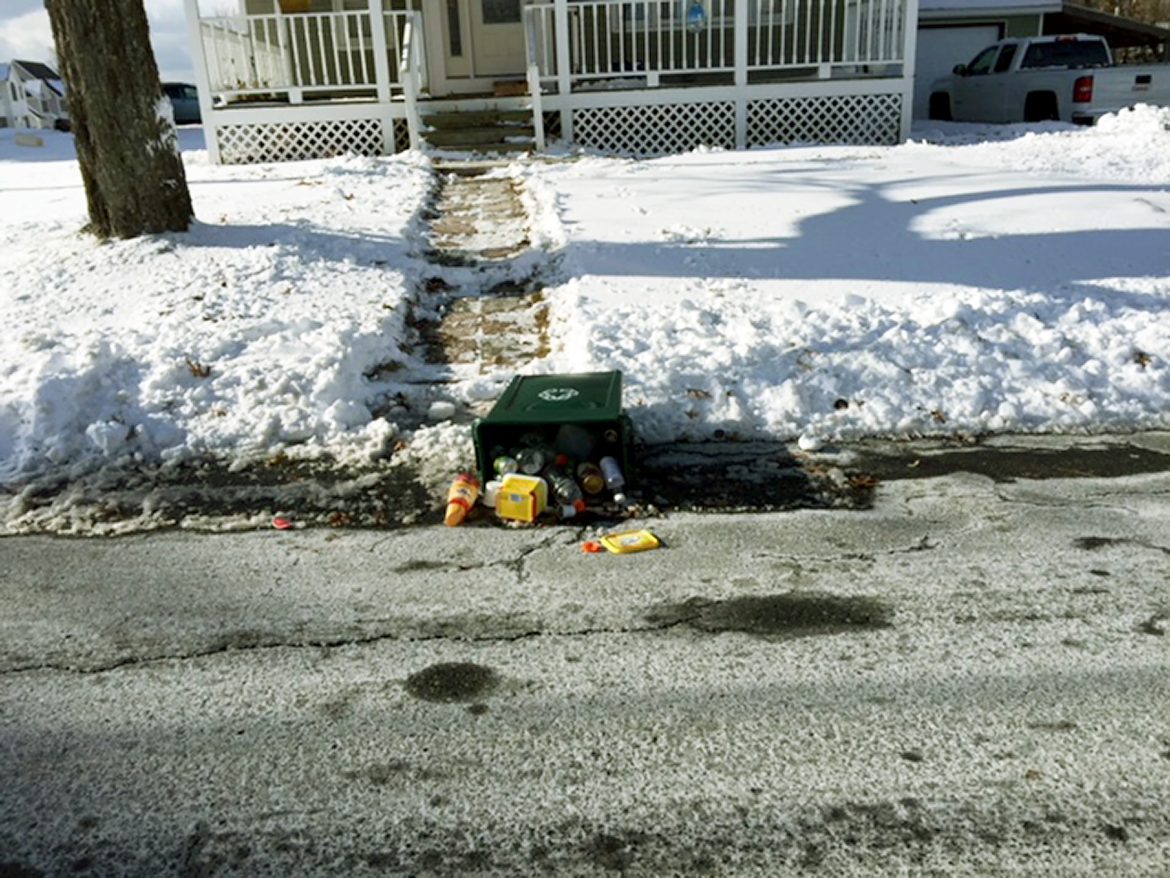 It feels good to recycle stuff. You get rid of it from your house — yay! — and help keep papers, plastic, magazines, glass, milk cartons and metals out of landfills.

Worcester has a robust recycling program, which has long been a point of pride for the city.

But once those green recycling bins are curbside, things can go awry before the recycling truck arrives. The bins might get knocked over, or their contents sent flying by the wind.

Snickers wrappers flapping in the grass, glossy advertisements skipping down the street, and empty beer bottles lolling about on sidewalks beckon us to do better. We can easily “give back” to the earth, and to our city, by preventing these trash mishaps in the first place — and picking up the pieces when spills do happen.

Even when it isn’t “theirs,” people should pick up the wayward garbage when they can — because it’s everyone’s problem once it’s failed to make it onto the trucks. All that debris we see along streets and in parks? Ours. And it reflects badly on the whole city.

City Councilor-at-large Gary Rosen is a champion for a cleaner Worcester, and he’s right. Litter is a constant drag on the city’s image. The problem is lighter in some neighborhoods than others, but worse than it should be almost everywhere we look.

No amount of dazzle by developers and planners can undo the effect of trash crunched underfoot or glimpsed out the window. In contrast, a clean, cared-for city sends all the right messages.

At the Jan. 9 City Council meeting, Rosen filed an order he called a “last try.” He asked the administration to prepare a report on possible changes to the city’s recycling program.

Over the years, two main ideas have been floated by him and others. One — to provide lids for the household recycling bins the city provides — would not be worth the estimated $500,000 cost, in our view. Lids would restrict the amount of recyclables that can be put in the already modest-sized bins. Not to mention, the wind could have a field day with those rectangular oversize Frisbees once the recycling truck has come by and collected what they covered.

The second, feasible solution would be to switch from bins to bags. The clear drawstring bags used in a pilot program in Worcester in 2013 were roomy and kept trash contained on windy days; they were well received by residents. But cost, as well as inconvenience to workers who then had to de-bag the contents, are disadvantages.

Rather than a wholesale switch to plastic bags, perhaps the city could stick to the bin system but make bags available for a reasonable cost to residents, who could use them when they chose to.

The 33-gallon bags would be purely a way to keep neighborhoods neater. Households who find their 18-gallon recycling bins aren’t big enough can get up to two additional bins from the city for $5 each, according to the city’s website.

What’s most needed is not a new system but common sense by everyone who puts a bin out.

We’re smarter than the wind; we can put heavier items on top of lighter ones. We can also try to take bins to the curb closer to the usual pickup times.

And when trash does get strewn, take matters into our own hands and pick it up. That small example will likely inspire more of the same by others. The city will be prettier. Plus, you’ll offset those times your own castoffs ended up as someone else’s eyesore and you didn’t even know it.