Joyce Mandell, a community development specialist, urban studies professor and self-proclaimed rabble-rouser, initiated a blog, “Jane Jacobs in the Woo,” in 2016 to stimulate conversation and actions to build a vibrant Worcester, and was a founding member of Worcester’s Urban Planning Partnership (UPP). A resident of the city for over 20 years, she believes in the potential of Worcester, the power of praxis and the truth to be found both in stories and stillness. Jane Jacobs in the Woo will now be a regular feature in the Worcester Sun online and in print.

Nov. 8, 2016, seemed a day of such promise. So many of my women friends wore pantsuits in honor of the candidate we anticipated would be elected that night. We have come a long way, I thought as I circled my choice for president in the privacy of the voting booth.

The surprising outcome of that election a little more than a year ago left me unmoored, depressed, fearful for the future. Nothing seemed to make sense. The world that I believed in — based on the rationality of science; the priority of people over profits; and the just and decent treatment of all regardless of race, gender, nationality, religion or sexual orientation — was fast eroding. For the first month or so after the election, I walked around in a daze and tried to figure out how to live in a world that, in my mind, seemed to have gone a bit crazy.

In May 2016, I had started a blog called “Jane Jacobs in the Woo” to inspire conversations and actions to build a better Worcester. I wrote about development projects that sparked neighborhood vitality. I praised the efforts of public artists who prompted city residents to enjoy more beauty on underutilized building facades. I dreamt of riding my bike and walking safely throughout the city. One evening soon after the 2016 election, I met my friend Paul at NU Cafe on Chandler Street. Our purpose at this meeting was to plot and plan neighborhood walks during a weeklong celebration for the following May, but I was despondent.

“Who cares about all of this now?” I asked. “Thinking about bike lanes and murals on the empty walls and saving historic properties from the wrecking ball… all just seems so stupid, so pointless, so trivial.”

My friend listened to my woes and looked at me gently. “You know, Joyce, our work here in Worcester is now more important than ever.” I looked at him questioningly. “You see,” he continued, “I know I may or may not have control over what happens in the country and in the world at large, but what I do have is the power to shape this city and to build a great place where we live right here and right now.”

I appreciated Paul’s perspective, which served as my wake-up call. He reminded me about the importance of acting locally to build the kind of world where we can all thrive. Great urban public spaces have the potential to draw us out from our solitary houses into relationship and conversation with a diverse crowd. 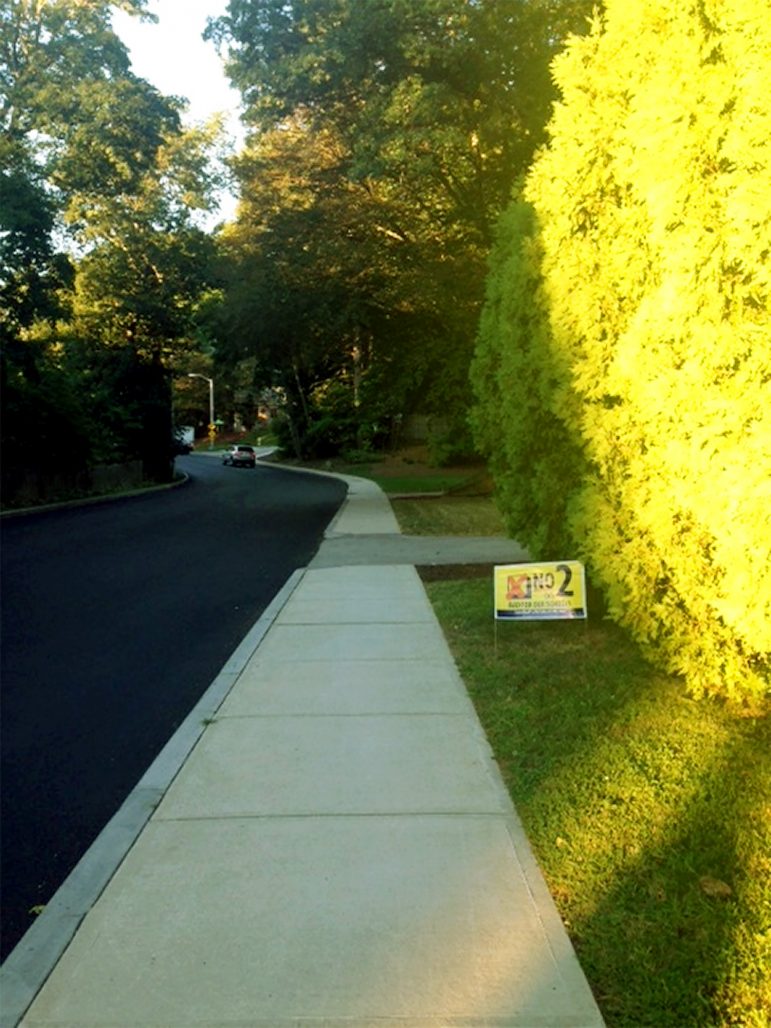 Neighbors on this West Side street have become catalysts for change in the community at large.

Several years ago, the neighbors on my street gathered to advocate for a new section of sidewalk on Flagg Street. We wanted our dead-end side drive to be attached to the wider neighborhood so that our little street would no longer be landlocked. Within two years, a short stretch of sidewalk the length of just three houses was built on Flagg Street and we were liberated.

The real miracle, though, was the impact such a small change in design had on the social fabric of my street. Before the sidewalk, I only knew the faces of the neighbors as they quickly drove up and down and to and from their homes. After the sidewalk, neighbors came out of their houses to walk. We commented on each other’s flowerbeds, agonized over the weather and shared stories of vacations taken. Children could now safely stroll down the block to get to school.

“Gotta love that sidewalk,” I said to a neighbor who was walking her dog past my yard one day.

“It sure was a real game changer,” she replied, and we smiled.

“The people in Washington don’t get to control what my neighborhood looks like,” declared my dear friend Ken. Ten months a year, Ken plots and plans one of the largest Halloween haunts in the city in his front yard on a main drag off of Salisbury Street. He builds sets in his woodshop, stencils new gravestones and purchases psychedelic lighting and complex sound machines. In September, the first floor of his house is taken over as a launching pad for all the thousands of props to be set up for the big night. Ken’s house becomes the hub of the neighborhood every Oct. 31. Visitors arrive and park along the curb or around the corner. People walk down from the adjoining streets to experience the frightful show.

Even though Ken loves offering the city the fruits of his year-long labor on this one special day, several years ago he decided he was hungry for something more: the intangible sense of neighborhood.

When he moved to this house on a busy main road 15 years ago, he and his neighbors barely knew each other’s names. He knew the neighbors’ faces only through the tinted lens of their car windows. After 10 years living in a drive-through locale, he made a conscious decision to change the entire climate of his street.

Several winters ago, when the first snow accumulated enough to hinder movement, Ken took out his snowblower, cleared his driveway and didn’t stop. He made a path the entire length of sidewalk to the next side street and without asking, he removed the snow from the driveways of four other houses. He continued to clear driveways and sidewalks after the next storm and the storm after that. In the fall, he raked the leaves in his yard and then without being asked, he went to adjoining yards to rake some more. Ken rebuilt the fence of his neighbor next door. Her husband had died several years earlier, leaving her with two young children to raise. The neighbors learned that if Ken put up his big flag on the pole in his front yard, then the pool in his backyard was open for enjoyment. Anyone could come over to swim. He never asked for anything in return.

It took a couple of years of many little acts of kindness but slowly, Ken’s corner of the city changed dramatically.

A tree fell on Ken’s property. A neighbor came over ready with his chainsaw. Several neighbors along the street spontaneously took turns to snow-blow the sidewalks. A man who lived across the way from Ken opened his house for regular barbecues in the summer. Last October, when a freak storm cut off the electricity and Ken feared he would not have the power to put on his annual Halloween haunt, two neighbors-now-friends offered him generators so the show could go on. Ken’s neighbors from different backgrounds and stages in life found they had more in common than sharing a stretch of public way. They shared a wish to make that chance arrangement matter. With a bit of effort and some hope, Ken turned a neighborhood of strangers into a space where people knew and supported each other, a place of friends.

As a microcosm, Worcester can serve as a laboratory to construct the kind of nation where we want to live. We can welcome the stranger here. We can heed the scientists’ warnings about climate change and do our part by retrofitting our public buildings and streetlights to conserve energy; and increasing our green infrastructure with the installation of green roofs, grass courtyards and solar panels. We can teach our children in our schools how to think critically, question deeply and participate in shaping our city. We can ensure that we have a robust and affordable bus system so that everyone has a way to get to where they need to go. We can make sure children in all our neighborhoods have safe routes to walk to their local school.

In this new Worcester renaissance, we have the power to shape policies maintaining our affordability and wonderful diversity. We can be a city that will only tolerate the most respectful civic discourse everywhere from City Council meetings to our local media sources.

Every new community garden that we build ensures that more of our residents have access to healthy food. Every great public space we design promotes a way for us to gather.

Worcester will naturally feel the vicissitudes of changing economic and social policies being shaped on the federal level. Establishing a local lens for our work does not negate the importance of working to shift our national direction. We still must do our part by contacting our state and national representatives on the important issues, attending rallies, and making strategic donations to grassroots organizations and state and federal political campaigns.

However, the building blocks of a just and loving world really start at the smallest, most personal level. How do I treat the people who live within my own home? Do I put down the phone and pay attention to the people I most love and those I don’t even know by name? Do I speak kindly, listen and apologize if I make a mistake or if I have a grumpy day? Then, when I walk out of my house, how do I treat the acquaintance I may encounter on the street or the shopkeeper at the local corner store? Am I willing to advocate for safe streets and great parks not only in my own neighborhood but in all the neighborhoods across the city? What can I do to make sure our public spaces are welcoming for all?

Last month, the GOP pushed forward sweeping tax reform legislation that will most probably line the coffers of the wealthiest citizens and major corporations at the expense of most of the rest of us. To stem a worsening deficit, the probable second step will be to cut funding for Medicaid, Medicare and Social Security under the euphemism “entitlement reform.”

Since November 2016, I have occasionally thought of the possibility of moving to Canada, where a social safety net is still a top priority and where caring is manifest in national policies. However, here is the real secret: True social security is built over time in the face-to-face relationships we invest in right here where we decide to root. I have a great strawberry patch. Other friends grow tomatoes, squashes and corn. Someone else has grapevines from which we can make wine. We can come together and break bread.

22 thoughts on “Want to change the world? Start here”