It is no secret that I think the Trump presidency has been a disaster. Yes, I know the stock market is breaking records. The richest people in our country are thrilled with his effort to strip away environmental protections, eliminate consumer regulations and get them enormous tax breaks. And so our stocks soar.

But, President Trump and his legion of darkness has caused so much pain and committed acts that have caused such great harm that it is hard to measure the damage he has caused.

As we begin 2018, I wanted to look back at Trump’s first year in office. What is the real danger posed by his presidency?

We were taught that when George Washington chopped down the cherry tree he said: “I cannot tell a lie.” I know the story is a myth, but that is the ideal we hold for our presidents.

Unfortunately, over the years we have come to expect our politicians to shade the truth, to twist the facts a bit and even to lie. But we have never seen anything like Donald Trump.

According to independent analysis, our president has lied or distorted the facts nearly 2,000 times since he took office, an average of 5.5 times each and every day including Sundays. His recent semi-incoherent interview with The New York Times was a symphony of lies and distortions.

President Trump lies about important things and things of little consequence with equal ease. And when he is caught red-handed with incontrovertible facts by the media, he just yells, “Fake news!”

He lies here and there;

He lies to you and me;

He lies to the whole country.

He lies big and small;

He tells the truth not at all.

Throughout his life Donald Trump told us exactly who he was. He made no secret of the fact that he did whatever he wanted to women – he often bragged about it. Then we all heard him say that he had committed sexual assault.

During the campaign, he made oafish, boorish remarks toward and about female candidates and news reporters. He admitted to walking in on naked teenage girls because he could. He admitted to grabbing women by their private parts without their permission. For anyone else, these comments would be automatically disqualifying. And still we elected him president.

Democrats like John Kennedy and Bill Clinton were no saints – far from it. But, Trump’s treatment of women throughout his life has been scandalous. He provided cover for alleged child molester Roy Moore to stand as a candidate for the United States Senate.

His behavior demeans our mothers, sisters and daughters.

Among the most galling and frightening actions by our president has been his reaction to racist, anti-immigrant alt-right groups – even the KKK.

He has repeatedly demeaned people because of their ethnicity or religion. His words have given cover to bigotry and allowed purveyors of hate to come out of the shadows. 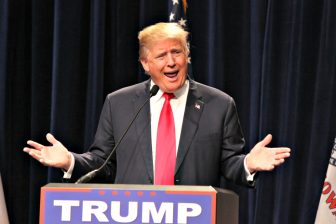 Legislative proposals that hurt the most vulnerable Americans

He is stripping health insurance away from millions of vulnerable Americans.

He will try to partly pay for his tax plan with cuts to Medicaid, Medicare and other programs that assist the poor.

And even though almost every independent analysis shows that the poor and middle class will pay more, in the long run, for the Republican tax plan while it benefits the very wealthy, some people still believe the president when he says the plan was designed to help the middle class.

His Labor Department is even trying to take tips away from waiters and waitresses and give them to restaurant owners.

Obstruction of justice and the Russians

There is no logical explanation for President Trump’s behavior regarding Russian President Vladimir Putin and the Russian government other than criminality. Virtually all of the Republican members of Congress and many members of his own administration have said the Russians have committed a hostile act by trying to influence our elections. And yet, Trump says he takes Putin at his word that he did not try to interfere.

Trump’s defense of Putin makes no sense. I worry that he is literally selling our country out to the Russians.

And we have Attorney General Jeff Sessions refusing to answer questions as to whether he was pressured by Trump to interfere with these investigations.

We also have the president’s firing of FBI Director James Comey, and admitting that he did it in part because of his Russian investigation.

These are criminal acts.

Lining his own pocket

He frequently stays at his own golf courses – and then raises the membership fees for everyone else.

When he stays at Trump Tower in New York, the government and American taxpayers have been forced to pay his company millions of dollars for the privilege.

Foreign guests and lobbyists flock to his Washington, D.C., hotel to curry favor with our new president.

And his tax plan maintains or adds tax breaks for people who own golf courses, for real estate developers, and for those wealthy enough to own private jets – all of which enrich Donald Trump.

Any one of these things, alone, should send shivers down the spine of every American. They are frightening in their darkness and overwhelming in their scope.

But more and more, I am fighting the urge to begin to see this as just business as usual – a new normal. And that is the greatest danger of all.

When Trump was elected, I was often stunned by what he said. Not anymore. Now, I am seldom surprised.

When Trump proposed banning immigrants based on their religion, referred to alt-right racists as “good people” and gave cover to bigotry, I was furious. But now, when he retweets racist fake videos from right-wing groups in other countries, I am just saddened.

His own secretary of state referred to him as a “moron.” No big deal.

Republican senators have called him “utterly untruthful” and said that his policies were “half-baked” and that he was giving permission to others for bigotry. Business as usual.

More than the womanizing, the lying, the cheating and the scheming, the greatest danger of the Trump presidency is that we will become numb to the indefensible and that we will accept it as what we expect from our leaders.

When I listen to him speaking, I realize that we may already be lowering the bar so low that we are all the worse for it.

As exhausting as it is, we must fight to remain shocked by President Trump’s abhorrent behavior. We must remain frightened that he is unleashing the dark forces of hatred and bigotry in our nation.

We cannot allow Trump’s constant assault on our values to lower them.

We must resist, with every fiber of our being, the exhaustion that comes from a constant barrage of lies and distortions.

And we must never allow his bullying and mean-spirited behavior to be acceptable by any of our leaders.

It is less important whether Democrats or Republicans control the Congress. Certainly, I want to see Democrats in control of our government. But this is more important than that.

This is about love of country, and because we love our country, we must fight to save it from the depths and the degradations of the Trump presidency.

Lately I have been watching a few programs that included Winston Churchill. His admonition that “The malice of the wicked was reinforced by the weakness of the virtuous” is worth remembering.

Donald J. Trump is a clear and present danger to our nation. We must never accept his actions as a standard of conduct – never. And we must fight to see him removed from office.

87 thoughts on “Mariano: The real danger of the Trump presidency”