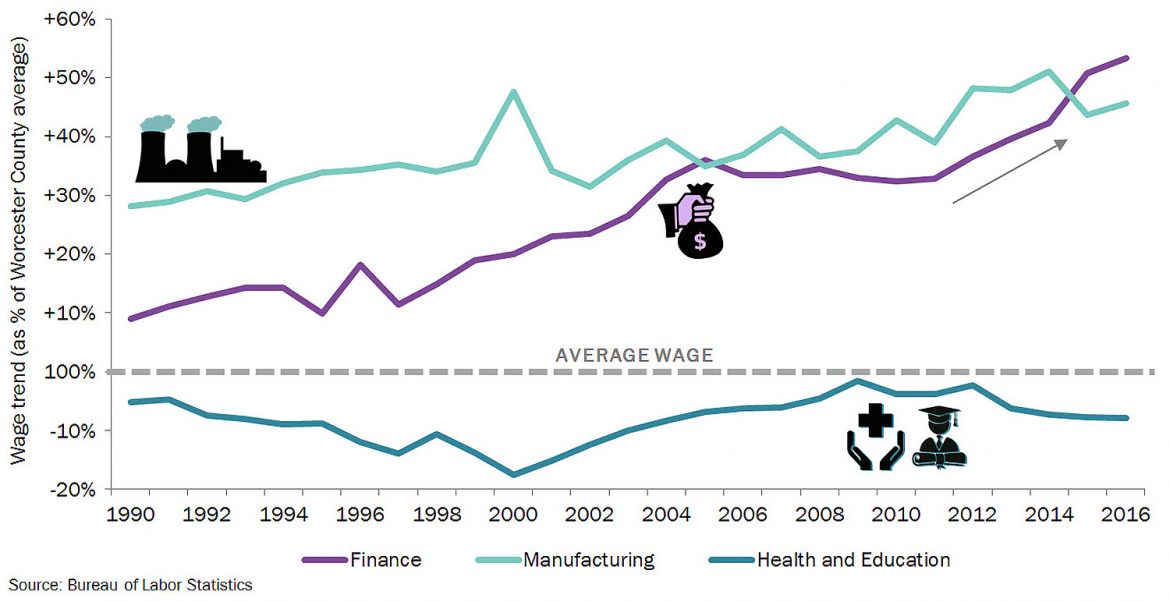 The Worcester finance industries’ average wage has increased 31 percent since the financial crisis of 2007-8, more than twice Worcester’s overall wage growth and three times its fastest-growing employment sector: health and education services. But the number of financial sector jobs has not kept pace with labor force growth.

Despite Worcester County adding 72,000 jobs overall in the last 25 years, there are the same amount of finance jobs today as there were in 1992. Both Massachusetts and U.S. financial industry statistics also show large wage growth with little employment growth.

Finance has been evolving along with technology.

While the finance industry has seen more wage growth than most, postsecondary education requirements for jobs is not a finance-only phenomenon. Eighty-eight percent of the 6 million new jobs the U.S. economy created between 2007 and 2016 required a bachelor’s degree or higher. The two industries that added significant numbers of jobs without college requirements were food service and health care. While health care is a booming industry in Worcester, health and education services’ average wage is 10 percent lower than the overall average.

It is nearly impossible to fully explain why wages change the way they do, and it is never one reason. This is especially true when discussing any industry in general terms. Factors such as the supply and demand of labor, technological change, regulation and industry profitability are just a few parts of the machine that drives wage growth.

But education is an important factor too, especially in a college town like Worcester trying to find its niche in an economy placing an ever-growing premium on higher education.