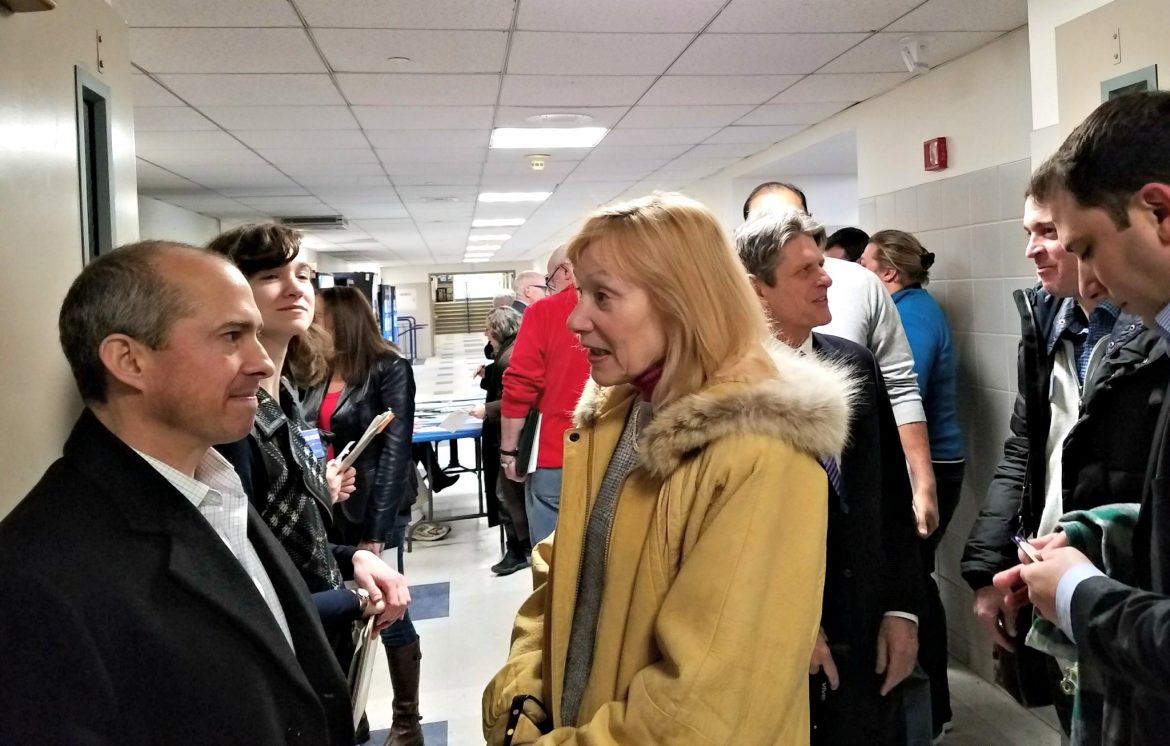 The intensely one-on-one environment of local caucuses brought candidates closer not just to voters, but to one another. Jay Gonzalez, left, and Bob Massie, third from right, looked for support among the party's most active members in a hallway at Brookline High School Saturday afternoon as the Democrats began a month of local caucuses to elect delegates for the June 1 convention.

This is the first in a series of monthly notebooks chronicling the 2018 election season and its various campaigns, from the writers and reporters of State House News Service and Massachusetts Political Almanac.

As of today, the elections are nine months away, but the gestation period of political victories is longer.

While the official political calendar commenced with the opening of caucus season, and volunteers and staffers were out statewide to meet, greet and above all gather signatures, they didn’t just spontaneously decide to show up.

Campaigns came to life last fall, or back to life in the case of incumbents, and are for the most part morphing from the consultant to the staffer stage.

What does that mean? Conversations with campaign veterans make plain that when you and your family decide you’re serious about running for something big (here meaning the statewide and Congressional offices), the first thing you do is hire a consultant or consultants.

The word “consultant” has acquired an unsavory tinge over the years, as if they’re hired to hoodwink voters in exchange for a fee. In reality, they’re simply people who’ve been through the election cycle from the ground up lots of times, more or less successfully, and know the answers when a new candidate asks, “Who should I meet?” and “What should I do?”

Not to take away anybody’s fee here, but the answers are: 1. “The active and enthusiastic party members in as many cities and towns as possible,” and 2. “Raise money.” 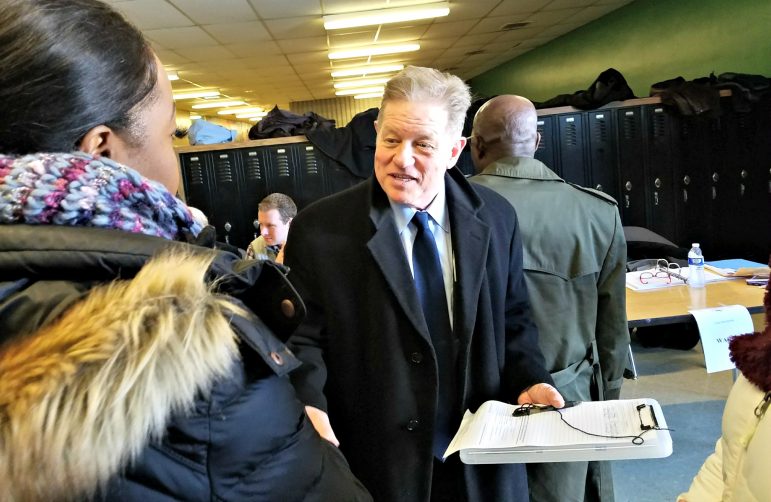 Jimmy Tingle, a candidate for lieutenant governor, stumped in Brockton on Saturday. The Brockton Democratic City Committee held a caucus to elect delegates to this year’s state convention.

Again, the reasons for the latter are a lot less objectionable than most people think. Yes, to win an election you have to spend a lot on ads, but what you really have to spend on is basically a sizable non-profit organization – the managers and field workers to reach, motivate and deliver millions of people to the polls.

So the first consultant hired is often a fundraising consultant, closely followed by a political consultant who can identify and hire the full-time employees to carry out the massive amount of field work and marketing it takes to win a seat. A common pattern is for a serious candidate to lend themselves the money to hire a fundraiser, and then the magic begins.

The consultant-to-staffer stage is observably where campaigns stood last weekend — a consultant or two about, staffers a-plenty for Congressional Sen. Elizabeth Warren and her $18 million operation, and a healthy contingent for the gubernatorial candidates, as their campaigns get rolling with the opening of offices and ramping up for this summer’s field work.

The big Third Congressional District race is like this, too.

Now as to those (Democratic) caucuses, a sampling anyway, starting with the very first of the year: Lynnfield was about signatures and cookies on Saturday. The signatures were being gathered in the second-floor hallway by volunteers for Sen. Warren and Essex County Register of Deeds John O’Brien, to give you a sense of the scope of interests represented.

Campaigns know that “every warm body that walks in the door is a certified solid-gold verified signature,” as U.S. Rep. Stephen Lynch put it later in the day. And so you literally can’t move three feet on the way in to a local caucus without someone suggesting, fervidly, that you sign here.

Lynnfield is bucolic, and so is its town hall, and so is its Democratic caucus. The treats were Girl Scout cookies. Lynnfield was one of the rare Massachusetts towns that went for Richard Nixon over native son John F. Kennedy in 1960, and hasn’t gotten that much more Democratic since, so the caucus had the size and feel of a very large book club. It was small enough that one of the leaders announced she was helping a young friend with her cookie drive and was taking orders.

Malden’s caucus was nothing like that. It was held at the enormous Irish-American club; the crowd numbered 100 or more. They were young, too; Lynnfield’s caucus ran to the civically-engaged-grandparents demographic, the people who staff polling places; but Malden’s tended toward the hipster-activist element to a surprising degree.

Brockton was for all intents and purposes a receiving line. Each ward was assigned its own classroom in the Green Building at Brockton High.

Within an hour of the doors opening, candidate Jimmy Tingle and Auditor Suzanne Bump, and John Walsh, the consultant who got former Gov. Deval Patrick elected twice, and Congressman Lynch, Secretary of State Bill Galvin and more — all were standing within 20 feet of each other and about 300 Brockton Democratic City Committee members. It was like a political mosh pit, if they still have mosh pits.

Will it amaze you to learn Brookline was different from Brockton? Actually, what was most surprising was how similar the two scenes were. The high school hallway was more expensive, and maybe the outerwear had a higher percentage of natural fibers, but the gauntlet of clipboards was the same. The cast of characters did shift a bit: Secretary Galvin came strolling by; Brookline resident Deb Goldberg and gubernatorial candidate Jay Gonzalez worked the hallway, as did rival Bob Massie.

Gonzalez’s and Massie’s gubernatorial foe, Setti Warren, had been in Malden earlier, but didn’t seem to be around in Brookline. The quandary for the candidates in caucus season is that you certainly can’t go to them all, and you have to decide where you’ll do yourself the most good. It all gave new meaning to the term “political party” — everyone knew everyone else more or less, and to a person pretty much seemed to be enjoying themselves.

The actual work of the caucus was the same. Any registered party member who shows up can put their name down for nomination as a convention delegate. Secret ballots are cast, and in each town, or city ward, the people with the most votes win, sometimes after multiple ballots. The winners represent their towns at the party conventions — late April for the GOP, June 1 for the Democrats.

Walking across the floor of a political convention is a lot like walking across a state, or the country, because the people reflect their place. Bouncing from caucus to caucus is like that too, of course — the character of each community is revealed in the location, dress and demeanor of the people who show up.

Delegates are often identified with specific candidates, but the slates aren’t nearly as organized as, say, in the Iowa caucus — winners represent their towns at the convention, and they’ll be lobbied (like crazy) between now and the time the really big party starts at the DCU Center in Worcester.

The interplay of activists and candidates is even closer on the Republican side at this phase because the numbers are smaller. And on the Monday night after an epochal Patriots Super Bowl loss, they’re really small, or at least they were at the Burlington Republican caucus, where fewer than a dozen party faithful had two of the three candidates hoping to defeat Elizabeth Warren all to themselves in a conference room at the town hall annex.

This fall, tens of millions of dollars and the attention of the national political elite are going to be focused on Geoff Diehl or John Kingston, who were there, or Beth Lindstrom, whose deputy finance director, Jonathan McPartland, spoke on her behalf. But Monday’s single step on the journey to that rarefied place had to be taken in Burlington, or Oxford, or a dozen other local caucuses.

Along with Massachusetts Attorney General hopeful Dan Shores, Diehl, Kingston and McPartland gave it all they had, hoping to add a few new connections and build networks they hope will soon consist of thousands.

The Mass. Political Almanac this year is going to publish, and continually update online, a field guide to the campaign operations, and directory of the state’s significant political consultants and consulting firms. There will also be some cool data on the 2014 and 2016 races, possible pathways to victory, and a chart or two on fundraising by state legislators. Not enough space to do that here, so it goes in the book, along with a good deal more about the campaign process.