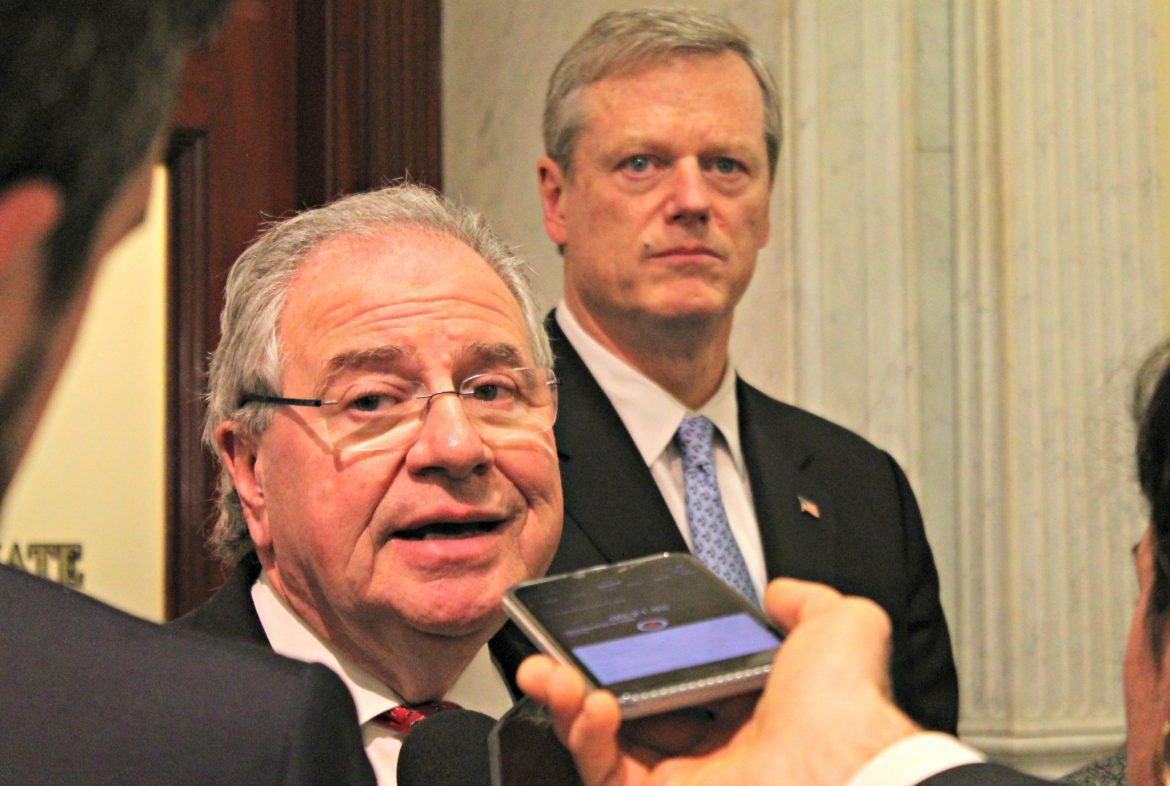 The speaker of the House added his voice this week to the chorus pushing state marijuana regulators to scale back their vision for the legal cannabis industry in Massachusetts.

House Speaker Robert DeLeo, D-Winthrop, said he agrees with many of the concerns Gov. Charlie Baker and his administration have raised with the Cannabis Control Commission’s draft industry regulations, including the worry that regulators have bitten off more than they can chew by trying to simultaneously launch several different categories of marijuana businesses.

“I feel that we’re probably going a little bit quicker than I would like to see in terms of these other issues coming up, whether they be selling door-to-door delivery, whether they be cafes or whatnot,” DeLeo said Monday after meeting with the governor and Senate President Harriette L. Chandler, D-Worcester. “I want to make sure that we have the basics done relative to seed to sale before we proceed further and we can at least get that process done.”

The Cannabis Control Commission’s draft regulations envision a marijuana industry in Massachusetts that would include home delivery of cannabis, establishments where users could purchase single servings of marijuana and consume it on-site, licenses for delivery-only dispensaries, and the ability for businesses. such as cinemas and massage parlors, to also offer limited marijuana products.

Asked Monday whether he would entertain legislation to either reduce the scope of the marijuana industry or establish a timeline for industry expansion, DeLeo said he wouldn’t right now.

“No, I want to give folks the opportunity to see how, exactly, it’s going to operate,” he said. The speaker said he would be open to that possibility “If need be, down the road.”

The chairman of the Cannabis Control Commission said Tuesday the agency will debate later this month whether it should license only certain types of marijuana businesses to open July 1 and wait to license others.

“We’re absolutely going to talk about that, and if we do decide to not issue certain categories of licenses on day one we’re not going to leave them open-ended. We’ll say, ‘Here’s our timeline for subsequent rollout,’ ” CCC Chairman Steven Hoffman said Tuesday when asked if the commission would consider a phased-in rollout of legal cannabis businesses. “But we have not made that decision; we are going to have that conversation.”

That conversation is slated to happen in the final days of February — the CCC has scheduled meetings on Feb. 26, 27 and 28 at which commissioners will discuss the feedback to the draft regulations and debate what changes should be made before the regulations are finalized.

The CCC is expected to finalize its regulations during the first full week of March and must file the industry rules with the secretary of state’s office by March 15.

The CCC’s rough draft for the legal cannabis world has come under fire in recent days from many of the same people and groups that, in 2016, campaigned to prevent adult marijuana use from becoming legal in Massachusetts, including Baker, Boston Mayor Marty Walsh, state district attorneys and drug-use-prevention advocates.

On Monday, a third Baker administration agency wrote to the CCC urging the regulatory agency to simplify its proposed regulatory scheme and to focus for now on “straightforward, single-location, single-purpose retail storefront points of distribution.”

“We are concerned that the commission’s proposed regulations take an aggressive approach that goes beyond what is required,” Daniel Bennett, secretary of the Executive Office of Public Safety and Security, wrote in a letter to the CCC. “We believe that the difficulties of safely administering the adult-use market in the near term will be multiplied by the proposed licensing of social consumption establishments, mixed-use social consumption establishments, and home delivery retail services.”

Bennett singled out as particularly concerning the CCC’s proposed regulations for social consumption establishments that could sell individual servings of marijuana to be consumed on-site in largely the same manner that bars serve alcohol.

“The introduction of social consumption establishments will inevitably result in an increase of the incidence of persons operating motor vehicles while under the influence of marijuana,” he wrote. “We do not believe that there are adequate safeguards in the regulations or available to law enforcement generally to address the increased danger of impaired operation that social consumption establishments raise.”

The letter from EOPSS followed similar letters from Baker’s budget office and the energy and environment secretariat. Asked Monday how he responds to critics who think his administration is trying to subvert the establishment of a legal marijuana market in the Bay State, the governor said, “All of us want to see the market for recreational legal marijuana get off to a good start here in Massachusetts.”

“I think the experience coming out of both Colorado and Oregon has been that this is a very tough industry to regulate straight out of the gate, and people should crawl before they walk and walk before they run,” Baker said.

He said the comments from his administration share three themes: areas of concern that the regulations may not be consistent with the law, places in which the regulations go beyond “what I think most of us would describe as the first step of this, which is legal recreational dispensaries in various communities around the commonwealth,” and concerns about the ability of the fledgling CCC to effectively regulate such a broad industry right away.

“I do think it’s really important that this go well from the beginning, and the big message that’s come out of every single commentary that’s been offered by folks in our administration so far has been built around this idea that there are some very fundamental things that the commission and the industry need to get right out of the gate,” Baker said. “That’s been our primary focus.”

The governor reiterated his previous comments that it would be “fine” if the CCC wants to “take up a lot of these second- and third-tier issues” once it has already established the bones of a legal market.

Hoffman said last week that the CCC, which wraps up its listening tour of the state this week, will hold several days of public meetings during the last week of February to decide what, if any, changes to make to its proposed regulations. He also maintained that the CCC can meet its deadlines to have a legal cannabis market running in Massachusetts on July 1, and that the commission does not need to limit its focus to do so.

“We’re going to do this right. If we can’t do it right and meet our deadline, we’ll do it right and push the deadline back,” he said last week. “But right now, I’m convinced that we can do it both right and on time.”

One thought on “Do cannabis regulators need to rein in focus? Concerns grow at State House”