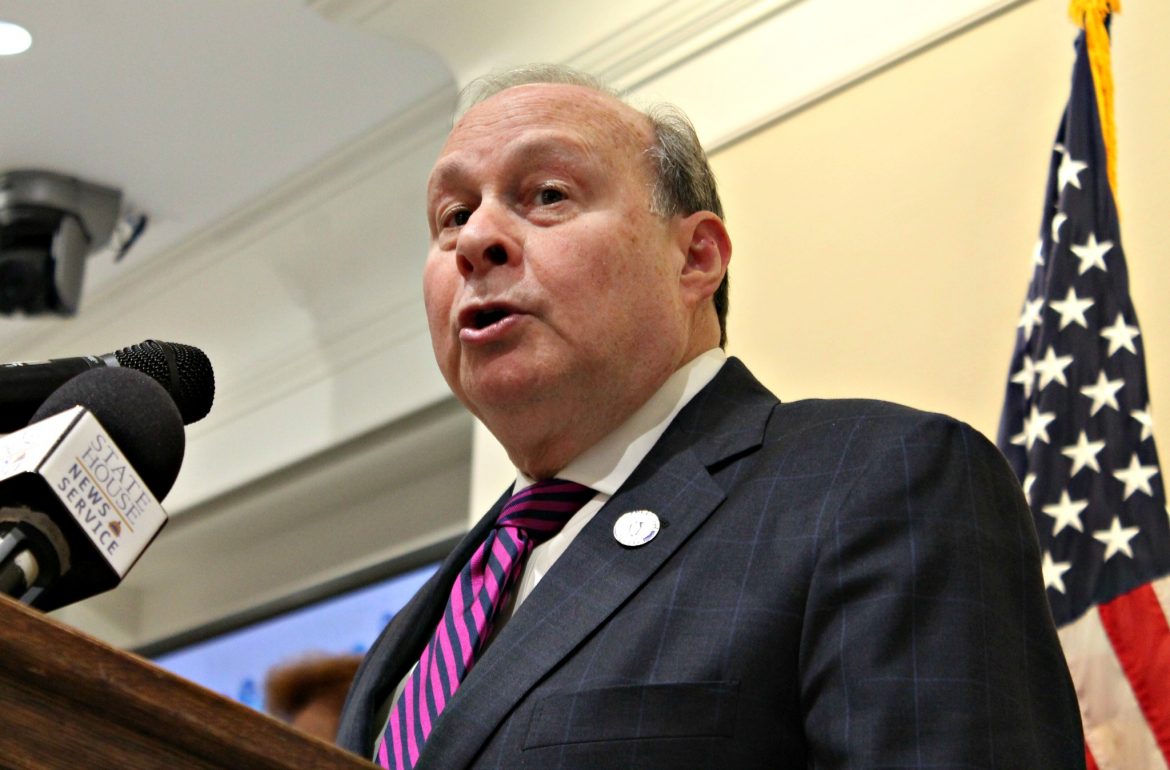 New allegations of a breach in the supposed “firewall” between Sen. Stanley Rosenberg and his husband while the Amherst Democrat was leading that chamber prompted one Democratic candidate for governor this week to call for Rosenberg’s resignation. Massachusetts Gov. Charlie Baker said that, if true, there should be “no way” that Rosenberg be allowed to return as Senate president.

Boston Mayor Marty Walsh, a longtime House member who led the House Ethics Committee before winning the mayoralty in 2013, also questioned how long the Senate could go before its lack of a permanent leader begins to impact state government.

In Sunday’s paper, the Globe reported that despite a purported firewall, Rosenberg’s husband, Bryon Hefner, had access to Rosenberg’s Senate email; lobbied for and then against an earmark for the Lancaster-based Robert F. Kennedy Children’s Action Corps, where Hefner worked for a time; and gave direction to Rosenberg’s staff.

“If those allegations are true, and at this point they’re allegations, then I don’t see any way he could remain Senate president, no,” Baker told reporters Monday. 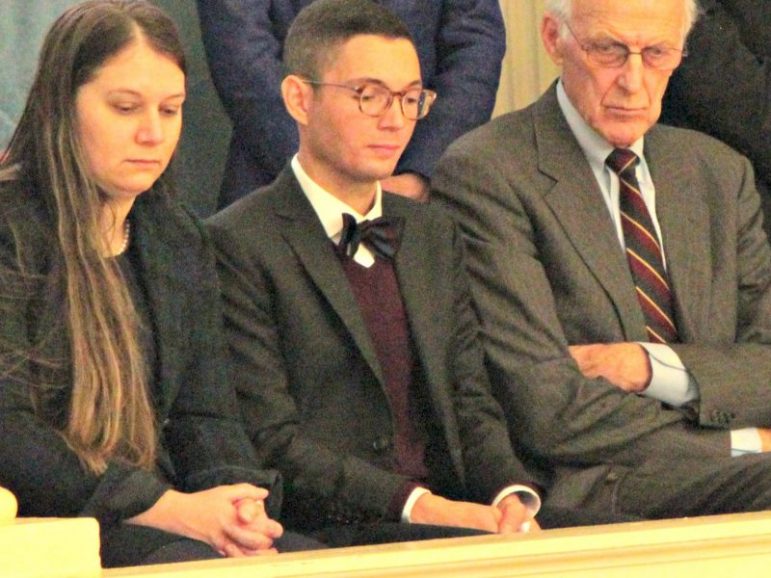 Rosenberg, in a statement, repeated his past denial that Hefner had any influence over his actions as Senate president, but did not directly address the claims about access to email or other actions Hefner allegedly took to interfere with Senate business.
The latest allegations build on the newspaper’s previous reporting that Hefner had sexually assaulted and harassed four men involved in Massachusetts government and politics, and had claimed to hold influence in the Senate.

That initial report sparked the Senate to instruct the Senate Ethics Committee to launch an investigation, and Sen. Harriette Chandler, a Worcester Democrat, was chosen to lead the Senate on an interim basis. The law firm Hogan Lovells, hired on Dec. 18, is conducting the investigation for the committee to determine whether Rosenberg broke any Senate rules.

There is no timeline to complete the investigation.

The Republican governor, who worked closely with Rosenberg for the first three years of his governorship, did not go as far rhetorically as Democrat Jay Gonzalez, a former state budget chief and one of three Democrats challenging for governor this fall.
Gonzalez said the latest reports make clear that the firewall Rosenberg promised between his office and his husband “broke down.”

“Therefore, for those who suffered sexual assault and harassment at the hands of Bryon Hefner, to lift the cloud hanging over the Senate, and for all the important work the Senate needs to focus on and do for the people of this state, I believe Stan Rosenberg should resign from the State Senate,” Gonzalez said in a statement.

The former state budget chief described himself as “incredibly sad and frustrated” by the reports.

“I know and like Stan Rosenberg, and I appreciate the many good things he has done as a Senator to move our state forward. Consequently, I am incredibly sad about and frustrated with the tragic circumstances surrounding his husband’s access to and abuse of power,” he said.

Walsh, who has experience leading an ethics investigation that led to the resignation of a House member, said Rosenberg “has some explaining to do” in response to the latest report about Hefner’s access to internal Senate email “because of his previous statements saying that there was a separation between him and his husband.”

“I think it’s a sad situation overall for the Senate president. I think it’s very sad. I think he loves the institution and he loves being the president of the Senate,” Walsh told reporters after a speech to the New England Council.

The mayor also addressed a more immediate political reality as budget season begins to heat up on Beacon Hill and the state Legislature enters a six-month stretch where the pressure will be on to tackle a growing agenda before it recesses at the end of July.
“The Senate’s going to have to do their own questions of how long they do this for. It’s going to start to affect government. It’s going to start to affect – we have a budget process that’s coming up right now that’s moving forward,” Walsh said.

While calling Chandler a “great woman,” Walsh said “at some point they’re going to need leadership that’s consistent, not temporary.”

In early December, before he stepped aside from the Senate presidency, Rosenberg said, “I have repeatedly made clear that Bryon was to have no influence on what happens in the Senate. He has no influence over policy, the internal operations of the Senate, or any Senate-related business.”

Rosenberg issued a statement Monday denying being influenced by his husband after he told the Globe, without offering details, that he believed the Sunday story had “significant factual inaccuracies.” The editor of the Globe, Brian McGrory, told his own newspaper’s reporter that Rosenberg’s office had been given two days to respond to the details of the report, and did not dispute any facts.

“Well, obviously it’s really important that the Senate investigation review those allegations and review them as quickly as possible along with the other elements associated with that investigation. And if they’re deemed to be true, then obviously the Senate needs to make a big decision about moving on,” he said.

The governor, however, disputed the notion that the distraction of the investigation was impeding legislative business. “No, there’s a fair amount of work that’s still going on on a variety of issues,” he said.

The newest story sparked another round of behind-the-scenes positioning to succeed Worcester’s Chandler and become the next permanent Senate president should Rosenberg not seek to return. “Every Democrat talked to every other Democrat in the Senate over the weekend,” said one insider.

Linda Dorcena Forry, a Dorchester Democrat who tried to gather support for her candidacy as a future Senate president, resigned last month to work for Suffolk Construction, leaving Sens. Sal DiDomenico, Karen Spilka and Eileen Donoghue as those publicly interested in the presidency.

Spilka, an Ashland Democrat, issued a statement that said nothing of her future aspirations.

“The ongoing allegations in the Senate are deeply troubling. I encourage all potential witnesses to come forward to have their voices heard. We owe them our full attention and respect,” Spilka said. “I am committed to working with my colleagues to continue the important work of the Senate and, more importantly, ensure the people’s trust in the integrity of the Senate during this difficult time. I encourage the Senate Ethics Committee to continue conducting its investigation in a swift and professional manner. The people of the Commonwealth deserve nothing less.”

Over the weekend, Chandler issued a statement in response to the Globe story. “These allegations are deeply concerning to me. If true, they would appear to me to be a clear disregard of the firewall, and a violation of the standards all members are held to. The serious nature of these allegations is why it is critical that the investigation be completed in as thorough a manner as possible,” Chandler said in her statement.

Sen. Patricia Jehlen, a member of Rosenberg’s leadership team, refused to discuss the Globe report on the record and would not say whether she thinks Rosenberg could realistically return to lead the Senate.

In late 2014, before ascending to the presidency, Rosenberg announced the establishment of a firewall between Senate business and Hefner to address prior concerns about Hefner allegedly meddling in discussions about leadership assignments.

Last month Rosenberg disclosed that he separated from Hefner, who was undergoing treatment for alcohol dependence.

On his way to a meeting with Chandler after Monday’s Senate session wrapped up, Minority Leader Bruce Tarr, R-Gloucester, declined to comment specifically on the report about Rosenberg’s email.

“The most important thing right now is for us all to focus on the investigation and to go where that investigation takes us,” said Tarr, one of two Republicans on the Ethics Committee. “We need to be firm in our resolve about that, and we need to have a fair and transparent process. That process is continuing and I intend to follow it.”

Asked if the Senate is at a disadvantage without a permanent president, Tarr said Chandler is “doing a very good job. We will take this one day at a time to make sure that we follow the right process to deal with a very sensitive subject,” he said.