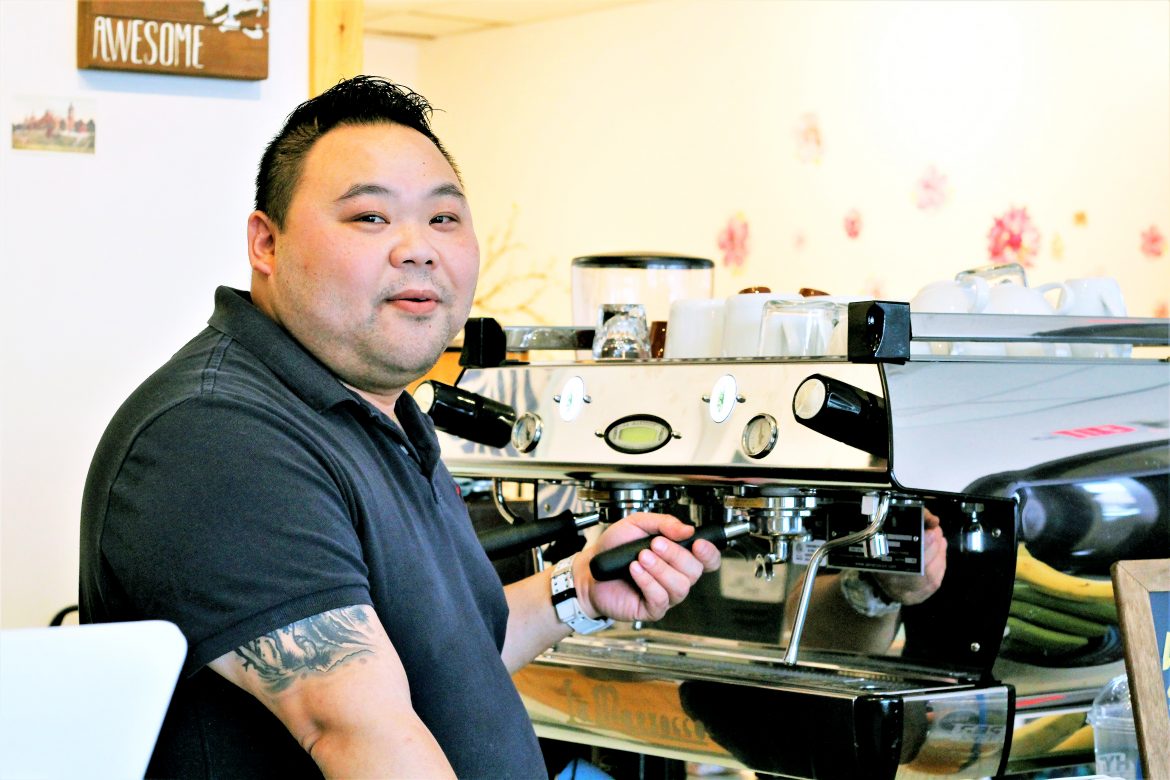 Samuel Chang, owner of Blue Shades at 256 Park Ave., attended South High after coming to the city in 1981.

Worcester’s food scene continues to evolve. From eclectic restaurants like deadhorse hill to ramen noodle bars in the Canal District and downtown, Worcester’s growth as a food hub clearly isn’t finished yet.

Only a few years ago, Worcester was barely recognized for its culinary scene – apart from the lengthy list of restaurants owned by Niche Hospitality Group – and now, it is known as a destination for adventurous eaters, food enthusiasts and restaurant influencers. Even so, it could be argued that Worcester lacked one main foodie attraction: an Instagram-worthy restaurant with a cult-like following specializing in a single, signature dish.

On Park Avenue – which features a formidable “restaurant row” in its own right – sits a newly opened restaurant that should interest local food lovers, coffee aficionados and Instagram-crazed bloggers seeking a unique experience: Blue Shades. 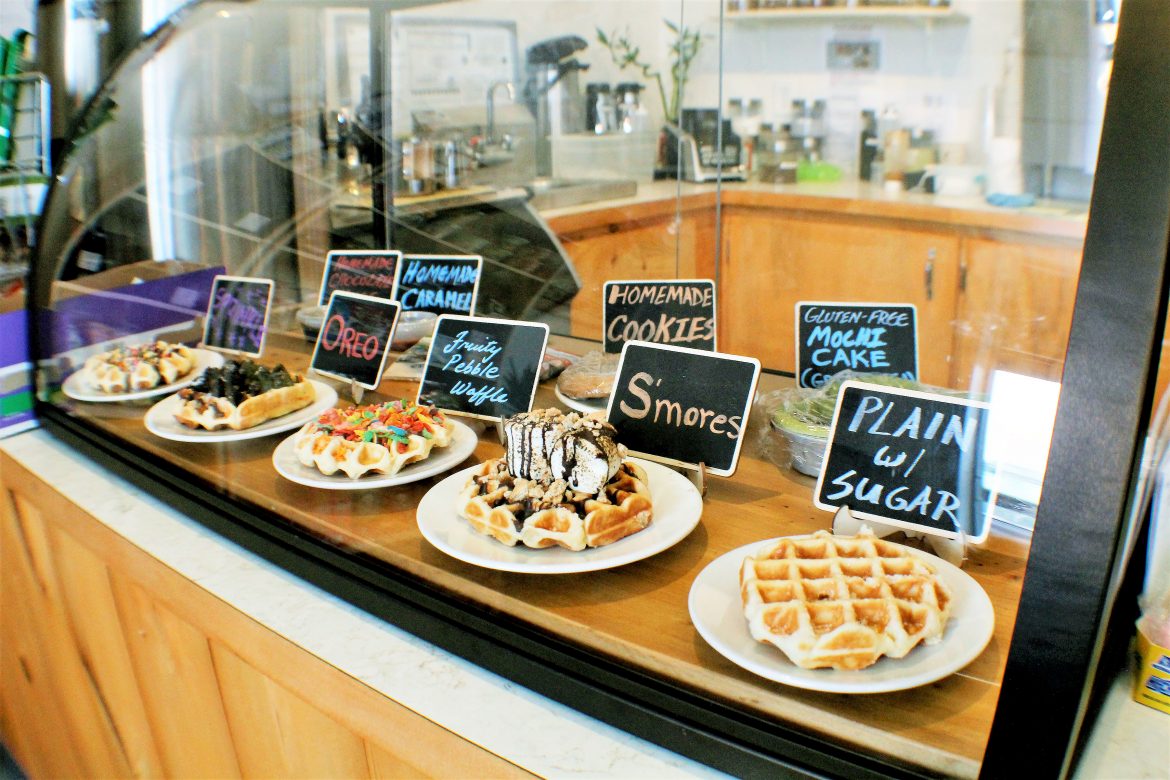 A selection of signature Liege waffles on display.

If you couldn’t tell by the massive inflatable often swinging from the awning, Blue Shades, which opened in mid-November, is Worcester’s first Liège waffle shop. It’s quickly become the slice of foodie heaven Worcesterites didn’t know they needed.

“I love Blue Shades,” said Heather Mangione, a regular customer at the cozy 256 Park Ave. shop, next to El Basha and across the street from Park Grill & Spirits. “They offer a wonderful product of comfort to Worcester. The staff is super nice, personal and they really make quality food. My favorite waffles are the California and the strawberry waffle — sweet and savory options.”

And while waffle shops and coffee houses may be part of an oversaturated market in many major cities, Blue Shades owner and operator Samuel Chang — with a little help from his sister Tiffany — believes he’s found a recipe to keep his business around for the long haul.

“My sister knew I wanted to work in the restaurant industry again, but I wanted to stay away from the mess in the kitchen and focus on something unique and easy to prepare,” said Chang as he wiped down the ordering counter during a recent interview. “After tossing the idea around with my sister and a good friend of mine living in Hong Kong who owns a waffle and coffee shop, it became clear that making waffles here in Worcester would be exactly what Worcester needed.” 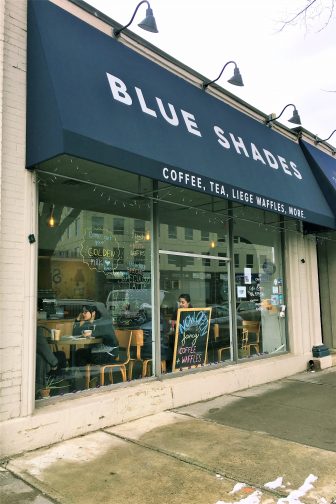 Blue Shades is next to El Basha and across from Park Grill & Spirits on Park Ave.

Chang, who came to the city with his family as refugees from Vietnam in 1981, attended South High Community School and was introduced to business at a young age when his parents became franchisees of a national gas station chain on Route 20, which they still own and operate.

He grew up in the hospitality industry and worked at various Asian bistros and hibachi restaurants, eventually spending a few years at Wareham’s now-closed Zen Asian Grille. But he always knew a return to Worcester was in his future.

Within a few months of sparking the idea with his sister, Chang was receiving waffle recipes from his friend in Hong Kong. Chang tweaked them to his tastes, added some Western touches, and Blue Shades quickly became the new kid on the block.

Blue Shades’ dough, made similarly to that of brioche, combines with pearl sugar – a sugar resembling a plain grain of sugar with a bonus of immense flavor – to make the waffles a bit denser than the typical American waffle, and with a sweeter flavor and chewier texture.

Of course, these are anything but typical American waffles.

Waffles have adorned American breakfast plates since forever – or at least since Thomas Jefferson purchased a French-made waffle iron in the 1790s – and yet it seems we have been eating them incorrectly.

Originating in Liège, Belgium, proper waffles, according to Blue Shades, are a street food meant to be eaten with your hands and without a gallon of maple syrup. 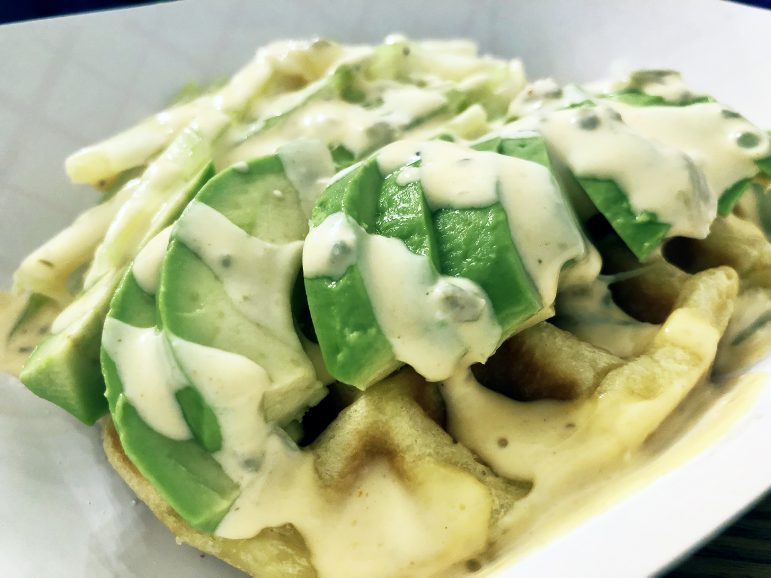 “Yes, we have maple syrup but that is not the traditional way of eating  Liège waffles,” Chang said. “The waffles are not American waffles and are intended to be eaten only with powdered sugar.”

Cooked made-to-order, the Belgian waffles of Blue Shades come with an aroma that lingers in the air, wafting out onto Park Avenue to lure college students, office workers and any other passersby.

Another thing that makes the Blue Shades experience distinct: Chang said he limits himself to cooking 100 Liège waffles per day “to maintain [their] made-to-order freshness.”

Waffle lovers who don’t come too late can indulge their inner Belgian by ordering the plain Liège waffle with powdered sugar, or they can take their cravings a bit further and fully explore the menu. Decadent waffles such as the California, a waffle topped with avocado, cucumber and house-made sauce; and the Firehouse, a waffle topped with jalapenos, banana peppers and spicy mayo, are two of Blue Shades’ signature twists.

Not to worry, the Blue Shades menu doesn’t go from zero to 60. There are levels that can be appreciated by less-adventurous eaters, for instance specialty waffles like the Nutella, S’mores and Fruity Pebbles bacon wrap. 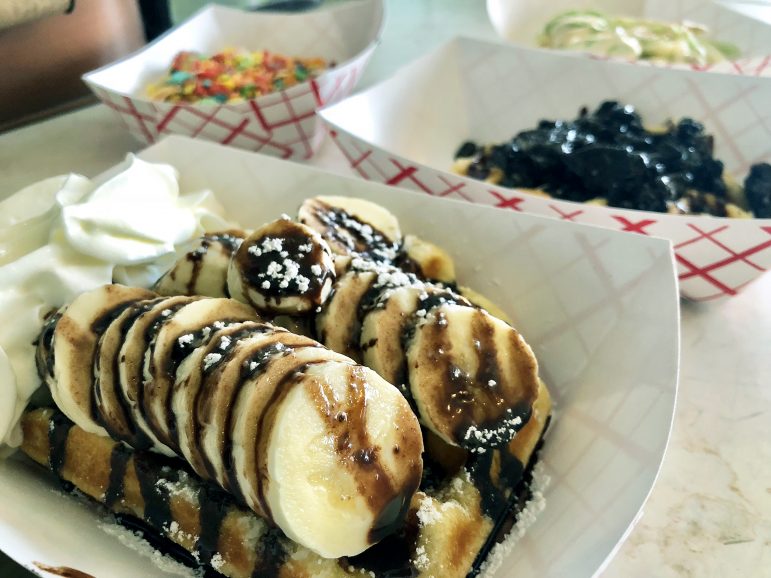 Blue Shades customers can park in the limited spots available at the former C.C. Lowell location. On-street parking is also available. The restaurant is open 7:30 a.m. to 8 p.m., Mondays through Saturdays.

With the food scene reaching more corners of the city – and bringing with it even farther-flung corners of the culinary world – Blue Shades has somehow imported a specialty Belgian waffle, via Hong Kong, and made it ours.

160 thoughts on “With Blue Shades, Park Ave. is hot on the waffle trend”