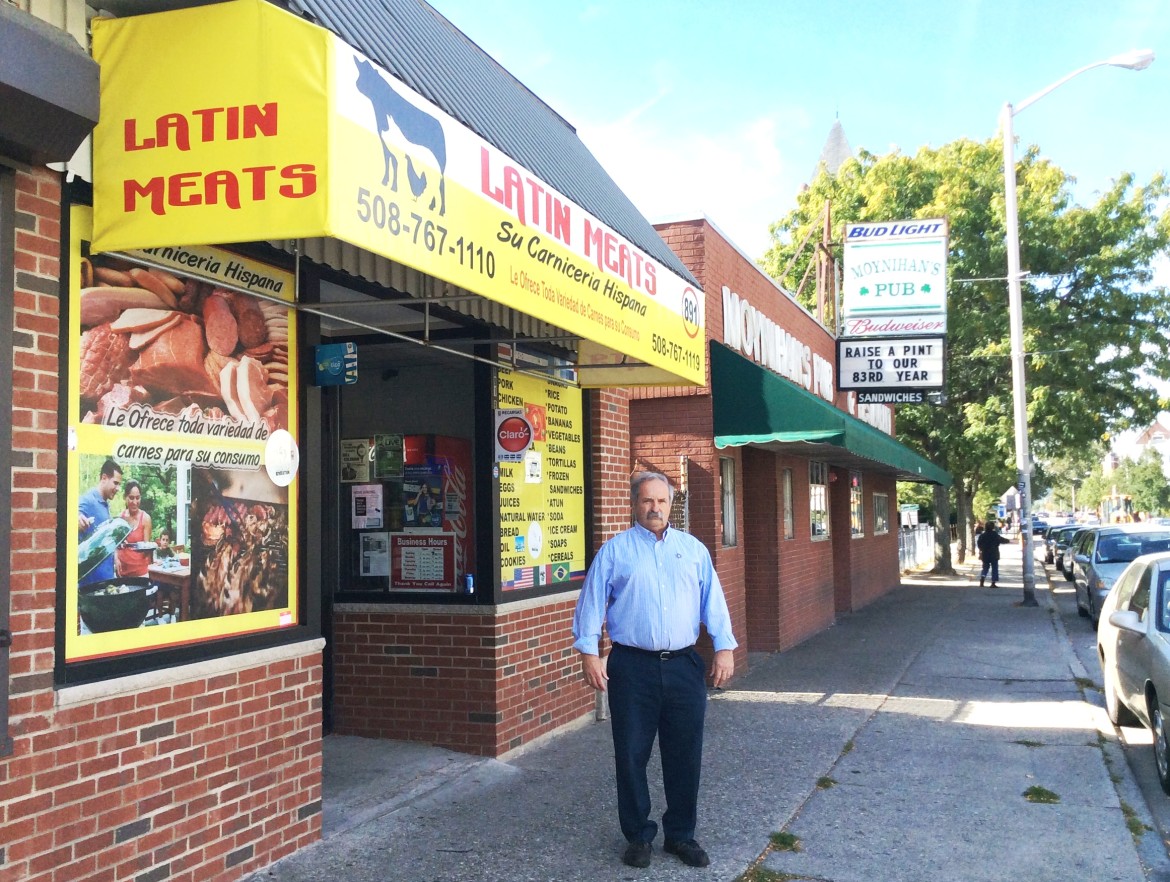 William T. Breault, chairman of the Main South Alliance for Public Safety ... and a Worcester Warrior.

Introducing Worcester Warriors, an occasional series. “Worcester is a great community, not because of its buildings but because of its people. From time to time, I will feature some of the people who work to make our community a better place to live. If you would like to recommend an individual or group to highlight, please contact me at Mariano@worcester.ma.” — Ray Mariano

“These people deserve their lives back.”
— Denzel Washington as Sam Chisolm in “The Magnificent Seven”

In more than one old western movie, a gunslinger comes to town. He is a known killer and the good townsfolk want nothing to do with him. He is looked at with disdain. People keep their distance. Then danger comes to their town and everyone looks to the gunslinger to save them.

In Worcester, the gunslinger is Billy Breault, and the townsfolk live in Main South.

Billy is in the family business. It all started with his dad, Ted Breault. A small man with a quick smile, Ted operated a TV repair business in Main South next to the former H.H. Brown Shoe Co. Ted was very active in the neighborhood and his son followed in his father’s footsteps.

Billy started the Main South Alliance for Public Safety in the mid-1980s and has been its leader ever since. Initially, the group focused on curbing prostitution. To get the attention of city leaders, Breault and other alliance members got four video teams with cameras to videotape the problem. They gave the video to the press and the issue exploded.

In 1992, Breault got the City Council to approve a measure that would impound the vehicles of individuals arrested for soliciting sex. Unfortunately, the city solicitor said that a change in state law would be required before that measure could be put in place.

In 1993, Breault and his band of public-safety crusaders took to the streets with walkie-talkies to report prostitution and other street crimes.

In 1994, Breault supported a measure, which I put forward as mayor, to publish the photographs and addresses of individuals arrested and convicted for prostitution in their hometown newspapers. About 50 percent of the johns are from out of town, and the idea was to make them think twice before looking for service in Worcester.

A few years earlier, in 1990, a tragic fire that claimed the lives of a mother and her three children on Florence Street motivated Breault and his Main South Alliance to advocate that smoke detectors be hardwired rather than simply battery-powered and for tougher fire regulations. He also advocated for the replacement of the Webster Square fire station.

With each of these issues, Breault’s fierce advocacy helped make meaningful changes that likely saved lives.

Never one to be satisfied, even when he wins, Breault has continued to focus on fire safety every year with a public commemoration on March 7, the anniversary of the Florence Street fire.

As chairman of the Main South Community Development Corporation board of directors, Breault was involved in a highly successful effort to renovate existing housing in his neighborhood.

Breault is not very polished and he does not present himself comfortably.

He is loud and brash. His hair is long and unruly, and he sports a giant mustache that looks like a battering ram. His face carries an almost perpetual scowl. And when he gets angry, and that is often, he looks like someone you want to avoid. Detractors call him a loudmouth, a bully and much worse.

But there is one thing you can be certain of: When Billy is fighting for the people of Main South, no one wants to mess with him – at least not without backup.

As former Mayor Jordan Levy pointed out, “When I got a call from (Billy), I held the arms of my chair really tight, because I knew I was in for a hell of a ride.”

“Without Billy Breault, I don’t believe the city would have ever put the resources into the prostitution and drug-related problems. Main South today is totally changed. The PIP Shelter is gone, kids can play in the park, the CDC has renovated and constructed quality housing, and street crime, although still a problem, is nothing compared to before he became the strong, fearless advocate he is.”

Former District 4 Councilor Barbara Haller agreed with Levy and indicated that no one has had more of a positive impact on Main South and its people than Breault.

While his main focus has been on cleaning up the neighborhood by getting rid of prostitution and drug dealing, Breault has more recently spent time and energy asking the city to regulate dirt bikes and all-terrain vehicles. His efforts, and the efforts of others, ultimately led to the city enacting an ordinance restricting their use.

Breault successfully fought to move the Public Inebriate Program/People in Peril (PIP) shelter out of Main South, to crack down on slumlords and troublesome rooming houses, and to stop changes in zoning that would harm the neighborhood.

If he was just fighting to rid the neighborhood of drug dealers, prostitutes and johns, Breault’s behavior might be easier to tolerate. But he has also spoken out about the dangers of legalized marijuana and placing needle-exchange containers in public spaces – and he did it with the same passion he brings to every issue.

That ruffled more than a few feathers. 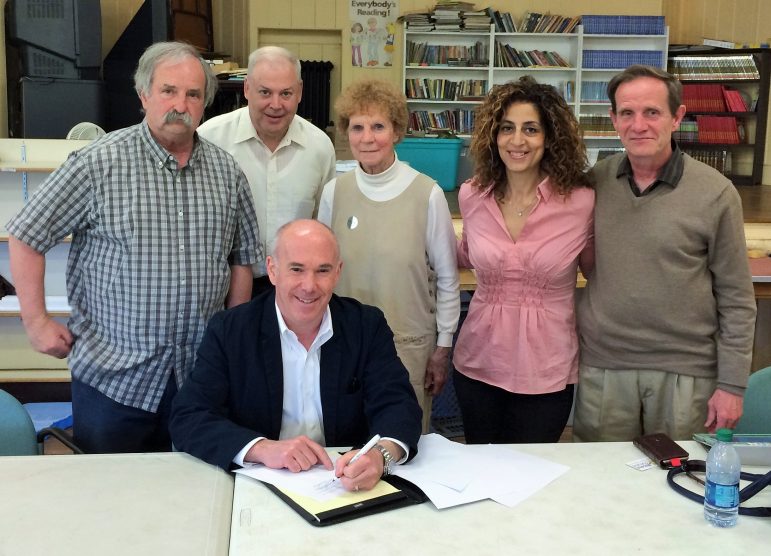 Billy Breault, left — unsurprisingly not standing next to Councilor Rivera — generally finds himself in the middle of getting things done.

Breault has never been one to worry about mixing it up with people in leadership positions. Over the last several decades, every mayor has had the opportunity to gavel Billy out of order at a meeting, many of us several times.

In 2013, Breault got into a heated exchange with the executive director of the Main South CDC. The result was that, for a time, Breault was banned from the CDC offices. Breault later apologized. He is no longer on that board.

More recently, Breault got into a dust-up with District 4 Councilor Sarai Rivera when she objected to his calling a neighborhood meeting to discuss the Albion rooming house.

Rivera complained that she had already held such a meeting. At a subcommittee meeting, which Rivera chaired, Breault defended his actions and Rivera said that she felt harassed and “unsafe.” She went so far as to ask the mayor to have police present at subsequent meetings.

In the end, Billy Breault is a man who believes in what he does regardless of what others say. He is a combination of what his detractors and his supporters say about him.

The bottom line is this: More than any elected official, more than any mayor, city councilor or state representative, more than any religious or community leader, Billy Breault has been the champion of Main South.

He has been a fearless and tireless advocate for the good people who live in a neighborhood that most people would rather not even drive through. Nobody has fought harder for the people of Main South. Nobody!

Like the gunslinger in the movie, you may not want to invite Billy Breault to dinner, but when trouble appears, you are glad he is in your town.

7 thoughts on “Mariano: The man nobody wants but every neighborhood needs”